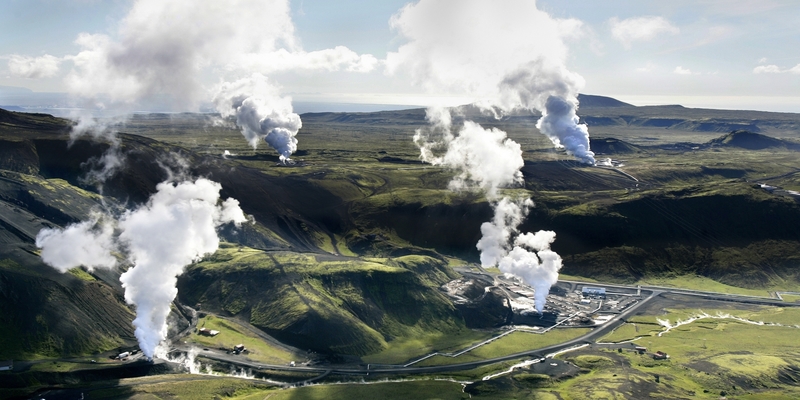 In August 2017, Climeon received its first order within the geothermal segment from the Icelandic company CP Energy. The order comprises a total of 100 Heat Power modules, which will be installed in two phases: (1) a pilot installation of seven modules and (2) 10 to 15 full scale installations, comprising the remaining 93 modules. Provided the fulfillment of both phases, the order value exceeds EUR 30 million (In June of 2018 the total order was increased to EUR 65 million).

Iceland is well suited for installations of Climeon’s Heat Power system in geothermal applications. Iceland’s location on the mid-Atlantic back, on the border of two tectonic plates, provides the country with a vast number of geothermal sources in varying temperature segments. In addition, there are plenty of natural sources for water cooling. The access to hot as well as cold sources gives Iceland very good geothermal conditions to produce electricity from geothermal energy. The country also has a long tradition of using geothermal sources to produce electricity as well as district heating. It is thus familiar with the technology and has an established infrastructure.

The widespread production of electricity from geothermal sources in Iceland results in the country having one of the lowest electricity prices in Europe. Traditional (high temperature) geothermal energy is generally the cheapest way to produce electricity. This places high demands on electricity producers to create profitability in their businesses and gives less room for other competing alternative technologies and energy sources. Despite these conditions, Climeon’s Heat Power system is expected to be able to compete and operate with good profitability.

The production of district heating in Iceland is widespread and used for residential purposes and by industries. The country has approximately a total of 250 geothermal sources with temperatures below 150 °C, which are suitable for extraction of district heating. However, most often a temperature of approximately 80 °C is required for district heating, which is addressed by mixing the flow of hot water and cold water in order to reduce the temperature. Thus, a lot of the thermal energy is wasted. Climeon’s Heat Power system can use this wasted heat by installing a system between the heat source and the district heating facility. The Heat Power system then generates electricity from the hot water taken from the heat source, which reduces the water temperature, making it suitable to be passed on to the district heating system. The electricity being produced this way can either be used by the land owner or sold via the transmission grid. Often, the land is owned by the municipality, whereupon private operators can lease the land in order to utilize any geothermal sources, but private land owners do also exists. It is especially beneficial for energy-intensive industries to own land with geothermal sources because they can then produce their own electricity. For example, greenhouses require substantial amounts of district heating for heating and electricity for lights. Typically, 25 percent of their operational expenses are electricity costs. Thus, self-produced district heating and electricity can reduce their operating costs significantly. In addition, the transmission grid in Iceland is not comprehensive and some parts of the country need local power plants in order to secure a stable access to electricity. Hence, there is a demand for a distributed produced baseload, which Climeon’s Heat Power system can provide.

The project comprises 10 to 15 established district heating facilities in the southeastern parts of Iceland which are today being used for heating of greenhouses. Most of these facilities have been active for over 30 years and have a stable operational history in terms of water flows and temperatures. An installation of a Climeon Heat Power system at an existing facility reduces the risk and cost of the project as drilling is avoided (at most of the facilities) and water flows and temperatures are known. At each installation, a Heat Power system will be connected to the existing infrastructure between the heat source and the district heating plant. Each existing district heating plant has the capacity for five to ten Heat Power modules, depending on size and water temperature.

Climeon only delivers the hardware in this project. Climeon’s counter-party in the project is a newly established Icelandic company focusing on development of geothermal power plants.

The first power plant consists of seven modules, with a total power of 1MW, which are intended to be installed approximately 100 kilometers south-east of Reykjavik during the second quarter of 2018. To finance the seven Heat Power modules, included in the first power plant, Climeon will assist CP Energy with funding, comprising a supplier credit.