The temporary easing of Corona restrictions during the fourth quarter enabled Climeon to complete the installation of a Heat Power system on one of Maersk's container vessels, as well as to continue the work on Havila Voyage's and Virgin Voyage's cruise ships. The efficiency program that began in the summer, ended during the quarter, and has started to yield results. The development of the next generation of Climeon Heat Power, initially optimized for the marine market, continued according to plan. Through a directed new share issue, Climeon received issue proceeds of SEK 35 million and Peter Lindell became, through the wholly owned company Cidro Förvaltning AB, Climeon's second largest owner.

IMPORTANT EVENTS IN THE PERIOD

A WORD FROM OUR CEO:
CLIMEON CONTINUES TO FOCUS ON THE NEXT GENERATION OF HEAT POWER

In Climeon's report for the third quarter of 2021, I wrote that Climeon's technology is more relevant now than ever before. The global increase of electricity and fuel prices that both companies and individual consumers have encountered during the fourth quarter of 2021, further strengthens this picture. We are in the middle of a transition, a transition that every day increases the need to find new, energy-efficient solutions and more environmentally friendly ways to produce electricity. Heat Power is an integral part of this transition to a more environmentally smart society. This is clear from the number of inquiries we receive from existing and potential customers in different markets – from the maritime industry to the process industry.

The fourth quarter of the year, as well as 2021 as a whole, was both gratifying and challenging on several different levels. The easing of the European Corona restrictions that came during the second half of the year allowed us to meet customers in Europe and complete the installation of a Heat Power system on one of Maersk's container vessels. The system will now be evaluated as part of Maersk's efforts to reduce its environmental impact. We were also able to resume installations for Havila Voyage's and Virgin Voyage's vessels and begin installation and commissioning of two previously sold Heat Power systems in Japan, where we also sold aftermarket services. At the same time, constraints on the Asian and U.S. markets remained, which affected our sales activities in these markets. Throughout the pandemic, Climeon has been successful in navigating challengesand adapting to prevailing conditions to meet customer needs. We still have that ability.

Another of Climeon's long-term challenges is financial development. For the fourth quarter of 2021, net sales amounted to SEK 3.2 million and the operating profit to SEK -35.0 million. For the full year, the corresponding figures were 28.8 million and -150.3 million, respectively. This, of course, is not sustainable in the long run. The focus for me right now is that we, in everything substantial, concentrate on developing our product for the maritime market and on building an efficient, goal-oriented and – above all – profitable company. This requires time and resources, so it is gratifying that through our new issue in November we received 35 million in issue proceeds and that Peter Lindell, through his company Cidro Förvaltning AB, has joined as a committed second largest owner. In parallel with this, work continues on the company's long-term financing.

I definitely think we can be proud of what we have achieved – we have a product that is in operation, both on board ships and on land in Sweden, Iceland, and Japan and which has an outstanding efficiency and reliability. Every day, our Heat Power modules deliver renewable electricity to our customers. But that is not enough, we need to go even further, we need to create a product that is more cost-effective and generates more electricity at a lower cost, in order to meet our customers' expectations. During the year, our R&D department has comprehensively challenged our existing technology and focused entirely on customers' requests and needs, especially price per kilowatt hour produced. It has taken time and required a lot of work, but we have made real progress and there is a clear way forward. We are currently working on the first prototype for the new generation of Heat Power. I can also mention that during the quarter we were recertified according to the standards ISO 9001 and ISO 14001.

In the same way in which our R&D department has maintained strategic focus this quarter, we have worked with our organization as a whole. The efficiency program we launched this summer has been completed. The organization has been reviewed, the team is in place and the direction is clear. We have gone through a transformation and are continuing our journey forward. At the same time, it has not been an easy process. It never is when employees have to leave a company. During the autumn, the number of employees went from 72 to approx. 50, which reduces our cost base. During the journey, we have reviewed and rationalized our R&D work and reduced our dependence on external consultants. We have also reduced our presence in Japan, Taiwan, and the United Kingdom. Market monitoring and marketing will henceforth be run by Climeon in Sweden, but with support from local partners and subcontractors for aftermarket services. Once again, it is important to point out that we remain in these markets, and that all our collaborations and commitments to customers and partners will be fulfilled. Of course, we will also continue to explore new opportunities in adjacent market segments.

Climeon is changing. We have built a more efficient and effective organization and we are currently developing the next generation of our product, but our purpose and mission remains unchanged. We will create solutions that render us an important role in the transition to a more sustainable world. Developments in recent months show that energy-efficient solutions such as ours are both needed and in demand more now than ever before. It is a great opportunity that I, along with the entire team at Climeon, now are working to take full advantage of.

This press release contains such information that Climeon AB (publ) is required to publish in accordance with the EU Market Abuse Regulation. The information was published for public disclosure on February 9, 2022 at 07:30 CET through the agency of the contact person set out above.

About Climeon AB (publ)
Climeon is a Swedish product company in energy technology. The company's unique technology for thermal power – Heat Power – makes accessible a largely unused energy source and provides sustainable electricity from hot water, around the clock, all year round. Heat Power is a cheap and renewable energy source with the potential to replace much of the energy that today comes from coal, nuclear power, oil and gas. The B share is listed on the Nasdaq First North Premier Growth Market. FNCA Sweden AB is a Certified Adviser, +46 (0) 8-528 00 399 info@fnca.se. 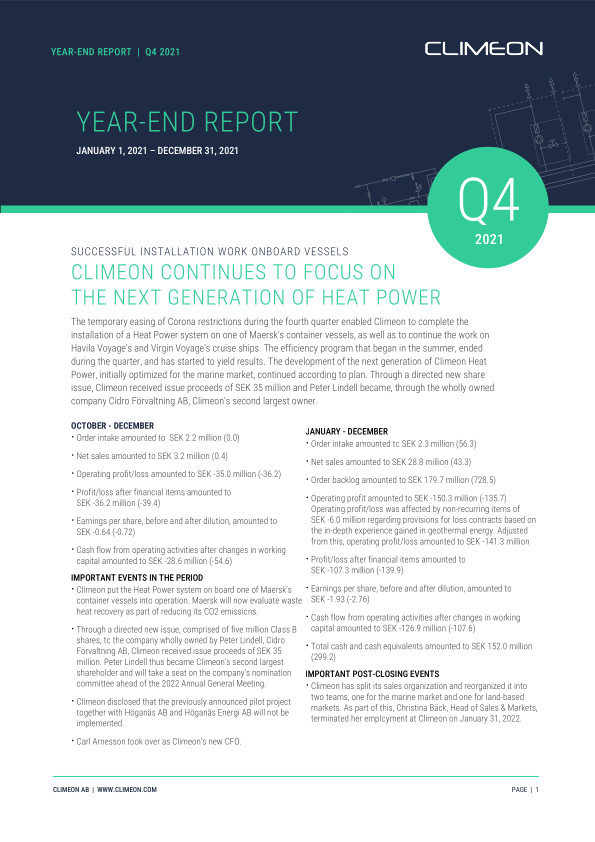 Interim report 2021_Q4 ENG 220208
SHARE THIS ARTICLE
Manage Cookie Consent
To provide the best experiences, we use technologies like cookies to store and/or access device information. Consenting to these technologies will allow us to process data such as browsing behavior or unique IDs on this site. Not consenting or withdrawing consent, may adversely affect certain features and functions.
Manage options Manage services Manage vendors Read more about these purposes
View preferences
{title} {title} {title}