Net sales amounted to SEK 35.1 million (37.7) in the fourth quarter and increased significantly for the full year to SEK 116.8 million (58.9). The fourth quarter was eventful with a first order for power plants based on reciprocating engines, a strategic partnership to open up a new part of the geothermal market and Sea Trials with Virgin Voyages. Operating profit amounted to SEK -36.0 million (-32.7) in the quarter. The profit was affected by the planned increase in expenses and investments related to continued build-up of the organization. The order backlog totaled SEK 729.7 million (818.6) at the end of the quarter.

The fourth quarter 2019 was eventful and Climeon passed several important milestones. We won our first order for power plants based on reciprocating engines, so-called gensets, an area with large potential for us. Now that solar and wind power are expanding quickly, many countries use power plants based on large combustion engines to balance the power grid (for example when there is no wind, or at night). These power plants work as a sustainable baseload power in countries where geothermal heat power or hydro power can’t be used but they still want to move away from dirty power sources such as coal. Climeon’s modules recover the waste heat from the power plants which increases their efficiency and reduces CO2. Besides environmental benefits this also creates significant cost benefits for the power plant operators.

In December 2019, we announced a new partnership with the New Zealandic company Geo40, which opens up the opportunity to approach a new part of the geothermal market. More than half of the world’s geothermal power plants have waste heat in Climeon’s temperature range that is currently not being used for electricity production. Silica in the brine creates scaling in the wells and piping, which limits the amount of heat that can be recovered and utilized. With Geo40’s technology for silica and mineral extraction the geothermal wastewater, the brine, can be used for power production. For us, this collaboration means we can approach the large power plants with a new, attractive offer which solves existing problems with scaling and at the same time increases output. Just as in other geographic markets, we aim to launch a first pilot project to prove ourselves in this area, then we can scale up the segment.

Another important milestone during the quarter was that our customer Virgin Voyages approved us in Sea Trials. The lead times for shipbuilding are long. Our first order from Fincantieri and Virgin Voyages came as early as 2016, the first delivery from us was completed in December 2017 and only now is the first vessel, Scarlet Lady, ready for commercial operation. We have worked incredibly hard for several years to meet the tough demands of Fincantieri Virgin Voyages and Lloyd's Register. Therefore, it feels very satisfying that the first ship, with six Climeon modules installed on board, is now test run and ready. At the same time, installation is on-going onboard Virgin Voyages next two ships, as well as onboard Maersk’s ship.

Looking at the full year 2019, net sales grew significantly. This is the result of the organizational and strategic changes we have made within the sales organization. During the fourth quarter we delivered additional modules for the upcoming projects in Iceland and Japan, as well as the two steam turbines that will be tested by Viking Line. In total, net sales for 2019 amounted to SEK 117 million, a significant increase compared with the previous year. Despite delays on several fronts in 2019, we see that we are moving forward with continued growth and increased deliveries, although the delays are expected to burden us somewhat financially and operationally. It is now clear that the large roll-out of the Icelandic order will take longer than previously estimated, but we continue to believe in the Icelandic market and the need for a distributed baseload power. Both in Iceland and in Japan, our teams are working hard together with our customers to bring up a total of four power plants in the first half of 2020. Step by step, we continue to work towards our vision of delivering fossil-free heat power and becoming the world’s number one climate solver.

This press release contains such information that Climeon AB (publ) is required to publish in accordance with the EU Market Abuse Regulation. The information was published for public disclosure on February 12th, 2020 at 08:00 CET through the agency of the contact persons set out above.

About Climeon AB (publ)
Climeon is a Swedish product company within energy technology. The company’s unique technology for geothermal heat power – Heat Power – makes a large untapped energy resource available and provides sustainable electricity around the clock all year round. Heat Power is a cheap and renewable energy source with the potential of replacing much of the energy that comes from coal, nuclear, oil and gas, today. Climeon aims to become a global leader and the world's number one climate solver. Climeon's B share is listed on Nasdaq First North Premier Growth Market. Certified Adviser is FNCA Sweden AB, +46(0)8-528 00 399, info@fnca.se. 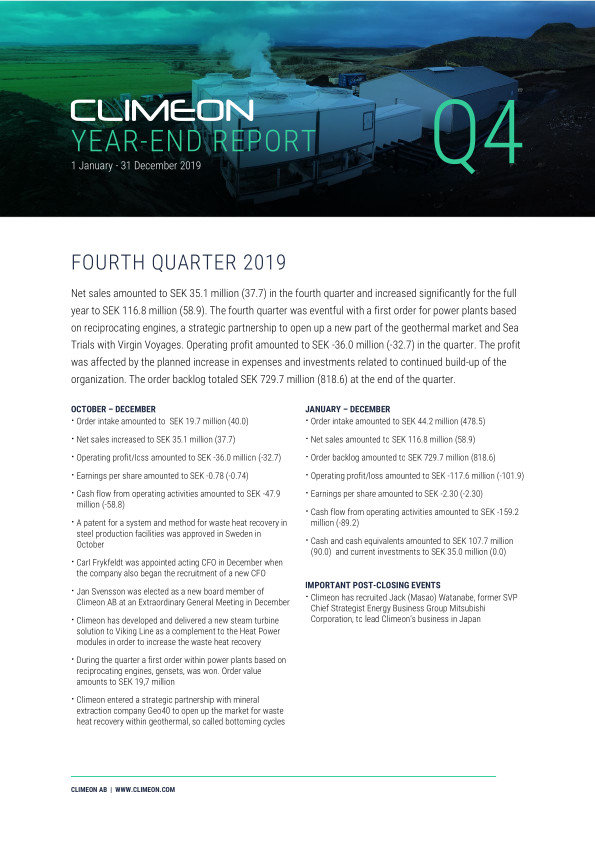 Year-end report 2019
SHARE THIS ARTICLE
Manage Cookie Consent
To provide the best experiences, we use technologies like cookies to store and/or access device information. Consenting to these technologies will allow us to process data such as browsing behavior or unique IDs on this site. Not consenting or withdrawing consent, may adversely affect certain features and functions.
Manage options Manage services Manage vendors Read more about these purposes
View preferences
{title} {title} {title}