Net sales increased sharply during the quarter to SEK 37.8 million (11.1) due to increased deliveries. Net sales for the full year amounted to SEK 58.9 million (11.9). Order intake for the fourth quarter amounted to SEK 40.0 million (12.6). In total, the order backlog amounted to SEK 818.6 million (353.7) by the end of the year. During the quarter many modules have been delivered to customers within Maritime. Within the geothermal segment, focus continues to be on Japan and Iceland, where Varmaorka is now conducting final tests of their first power plant which has begun delivering electricity to the local community.

Within the geothermal segment, Japan and Iceland continue to be in focus. The Japanese customers have completed the first drillings and two local Japanese Heat Power Operators are now ready: Hayabusa Power and Iwana Power GK. In Fludir in Iceland, where there one year ago was nothing but a single heat source, there is now a power plant that has begun to produce clean and renewable electricity. Now, final testing of the power plant is under way, including the surrounding components and the heat source, which will supply over 1 100 homes with green electricity.

We are entering 2019 with a large order backlog to be delivered and an on-going global expansion. This has increased the need for operational focus in both management and organization, which is why we have altered the management team and organization somewhat. The new composition gives us the best possible conditions for the rapid growth we have ahead of us, with power plants to be delivered and commissioned in several different parts of the world at the same time.

The new development and testing site in Kista, which we inaugurated in October 2018, is now fully operational. After only a few months in Kista we can see how much more efficient the testing process has become and how the time from production start to delivery could be shortened.

The operational costs have been kept low despite rapid growth. At the same time, we have been preparing the company for continued expansion through our investments in the Kista test site, SEK 8.5 million, where the main part of the costs has been in the fourth quarter. The large number of deliveries within the maritime segment during the fourth quarter, with payments in the first quarter of 2019, also had a certain negative effect on cash flow. This has affected our cash balance which by the end of the year amounted to SEK 90.0 million, in line with the business plan that was communicated in connection to the listing on Nasdaq First North Premier in October 2017.

The sentiment that I share with my colleagues right now is incredible. Our idea of changing societies by providing them with fossil-free electricity 24 hours a day, 7 days a week, regardless of sunshine and wind, has begun to be realized.

This press release contains such information that Climeon AB (publ) is required to publish in accordance with the EU Market Abuse Regulation. The information was published for public disclosure on February 13th, 2019 at 08:00 CET through the agency of the contact persons set out above. 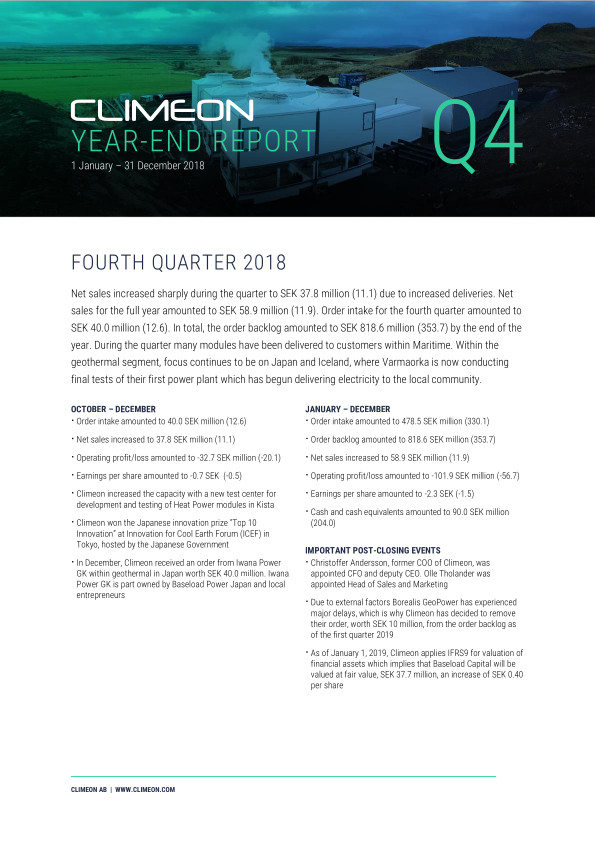 Climeon Year-end report 2018
SHARE THIS ARTICLE
Manage Cookie Consent
To provide the best experiences, we use technologies like cookies to store and/or access device information. Consenting to these technologies will allow us to process data such as browsing behavior or unique IDs on this site. Not consenting or withdrawing consent, may adversely affect certain features and functions.
Manage options Manage services Manage vendors Read more about these purposes
View preferences
{title} {title} {title}