• An order of SEK 12.6 million was signed with Wendel Energy Operations I, LLC, for delivery to a geothermal power plant in California, the world’s largest geothermal power generation market

• A Letter of Intent covering a supply of Climeon Heat Power modules to a geothermal power plant project in the Municipality of Kirchweidach in Germany was signed. The potential order value is estimated to be about EUR 5 million

• An important milestone was reached with successful approval under the Factory Acceptance Test of Climeon’s first volume order. The first six Climeon Heat Power units of a total of 18 was delivered to Fincantieri Shipyard in Romania

• Climeon’s class B share was listed on Nasdaq First North Premier on 13 October 2017 under the short name “CLIME”. In connection to the listing, capital was raised through a new share issue of class B shares

• In January 2018, it was announced that Climeon owners, Gullspång Invest AB, LMK Forward AB and Blue AB, establish a finance company Baseload Capital Sweden AB to accelerate global geothermal heat power projects. The owners will jointly invest SEK 60 million as initial capital in Baseload Capital and Climeon will participate beyond this through a minority post amounting to a maximum of 20 percent of the shares in the company

• A business agreement worth over EUR 5 million was signed in February with the geothermal power plant in Kirchweidach, Germany resulting from the Letter of Intent signed in the fourth quarter

• Karl Brodin was appointed new Head of Research & Development. Karl’s most recent employment was with Atlas Copco where he held leading roles within Business and Product development

• The conditional agreement signed with Varmaorka (subsidiary to CP Energy) in August 2017 has been converted into a firm order with delivery starting in the second quarter 2018. Climeon’s previous financing commitments have been taken over by Baseload Capital

We have a vision of becoming the number one Climate Solver in the world, enabling a fossil-free world using heat power. Over the last quarter, we have done many things to strengthen our belief that this is a real possibility. The need for a renewable baseload is increasing every day, with energy consumption set to rise by the whole of India and China by 20401). 2017 was a year when climate changes had an effect on the total economy of various countries. Heat power has everything required to become one of the major clean energy sources, maybe the biggest one of them all, and we have already secured a very strong position in this area at this early stage.

Now that the first six Heat Power modules have been delivered as planned to Fincantieri/Virgin Voyages, our net sales is reflecting our progress. Net sales for the fourth quarter increased to SEK 11.1 million (2.5) while cash developed in line with the plans set out in our prospectus from September 2017, amounting to SEK 204 million at the end of the year. The gross margin for the contracted orders in 2017 was much higher than for the first deal with Fincantieri and we have a clear plan in place to achieve our long‐term target to reach a gross margin of 50 percent.

The company continues to be built at a blistering pace. In the fourth quarter we continued to raise the profile by securing our first order in the USA, delivering to Richard Branson’s ships via our new high-volume production facility, and enhancing our position as a leader in geothermal heat power at low temperatures.

During the work on geothermal heat power this autumn, it became clear that, just as with solar and hydro power, it is crucial for customers to find favorable financing, and we have seen that the majority of geothermal deals will require financing solutions. In 2017 Climeon broke new ground with the Swedish Export Credit Agency (EKN) and Almi in order to facilitate financing. Now the next step in the process is taken. During the first weeks in 2018, it was announced that three investors, Gullspång Invest AB, LMK Forward AB and Blue AB, establish a finance company Baseload Capital to accelerate global geothermal heat power projects. The owners will jointly invest SEK 60 million as initial capital in Baseload Capital and Climeon will participate through a minority post amounting to a maximum of 20 percent. In practical terms, this enables Climeon’s customers and others to access financing more quickly and easily than would normally be the case. This will therefore accelerate the expansion of clean electrical power from heat from the Earth. Climeon’s leading efficiency lies at the heart of why its customers can earn money, but it is financing that makes this more readily available.

The final order of 2017 was secured days before Christmas Eve. It was the first order on the US geothermal market, making it a perfect way to end the year. Along with the Icelandic deal in August, this deal has raised Climeon’s profile as the leading company for geothermal heat power at low temperatures, as previous solutions were too inefficient to be profitable.

2018 has been characterized by the same strong trends. A business agreement worth over EUR 5 million was signed in February with the geothermal power plant in Kirchweidach, Germany.

The listing of the company in October was strongly oversubscribed, providing us with a strong cash base to fuel our expansion, and now that we are supported by Baseload Capital, the need for Climeon to finance customer projects will reduce and we can focus on our core business, the products.

The successful deliveries from Mastec’s production plant in Vaggeryd, with the high-volume production of the modules to Fincantieri, has been another major stride towards the mass market as they were approved by the certification body Lloyd’s Register and shipped before Christmas. Representatives from Virgin Voyages, Fincantieri and Lloyds worked with Climeon’s team, performing rigorous tests, which resulted in a green light for the modules to be delivered. These ships are currently being built and will be launched in 2019.

During the quarter we have continued to strengthen our team and the latest addition to the management team is Karl Brodin, Head of R&D. Karl has held leading positions within Business development and R&D in Atlas Copco. Karl will be a strong addition to our powerful mix of entrepreneurial spirit and experience from larger corporations. We continue to build an exeptionally good team that is creating the number one Climate Solver empowering a fossil-free world using heat power. 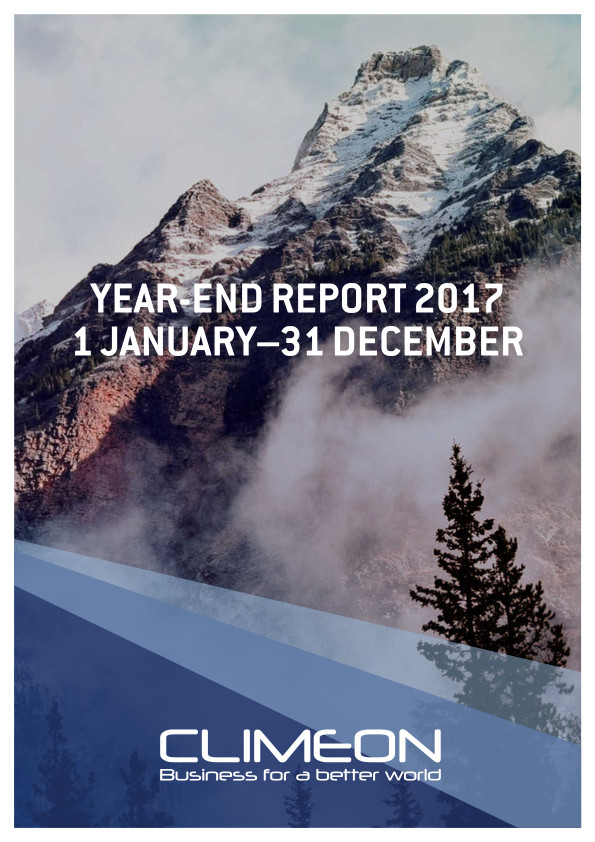