Exercise of the over-allotment option in the IPO of Climeon

Pareto Securities has today, 9 November 2017, informed Climeon AB (publ) (“Climeon” or the “Company”) that the over-allotment option has been exercised in full and that the stabilisation period thereby has ended.

Background
In order to cover a possible over-allotment of shares in connection with the listing of Climeon’s class B shares on Nasdaq First North Premier on 13 October 2017 (the “Offering”), the Board of Directors of Climeon committed to issue up to 967,742 additional new class B shares in Climeon. The over-allotment option was exercisable in whole or in part within 30 calendar days after the first day of trading on Nasdaq First North Premier.

Climeon today confirms that Pareto Securities, as stabilisation manager in the Offering, has exercised the overallotment option in full.

No stabilisation measures have been taken since the first day of trading on 13 October 2017 and because of the Company’s share price development, Pareto Securities has decided to end the stabilisation period.

Advisers
Pareto Securities acted as Global Coordinator and Sole Bookrunner and Baker McKenzie acted as the legal adviser in connection with the Offering.

This press release contains such information that the Company is required to publish in accordance with the EU Market Abuse Regulation. The information was published for public disclosure on 9 November 2017 at 14:00 CET through the agency of the contact persons set out above.

About Climeon AB (publ)
Climeon provides a technology that uses the energy in waste heat from industries and low-temperature geothermal heat to generate electricity. The Company received its first order in 2015 and has since then built up a customer base consisting of Viking Line, Virgin Voyages/Fincantieri, Maersk Line, CP Energy and SSAB, among others. It has now reached a stage where it has proven its technology and its commercial marketability through repeat orders from leading players in a number of industries. The product is protected by patents and offers market-leading performance within its areas of application. Climeon has also built a scalable organisation with a high production capacity and an experienced management team primed for growth.

Climeon’s market and focus segments
Waste heat and geothermal energy (below 120°C) jointly comprise a vast energy source that today is largely untapped due to limitations of existing technologies. Climeon's product is the first heat recovery system to be able to utilise this previously unexploited source of energy on a large scale to produce electricity. The Company has therefore the opportunity to enter in a new market with limited competition. Climeon is currently focusing on four market segments: maritime, steel and cement production, genset (generators) and geothermal energy.

Important information
This press release does not contain or constitute an invitation or an offer to acquire, sell, subscribe for or otherwise trade in shares or other securities in Climeon. This press release has not been approved by any regulatory authority and is not a prospectus and accordingly, investors should not acquire any securities referred to in this press release, except on the basis of information provided in the prospectus which has been completed in relation to the Offering. 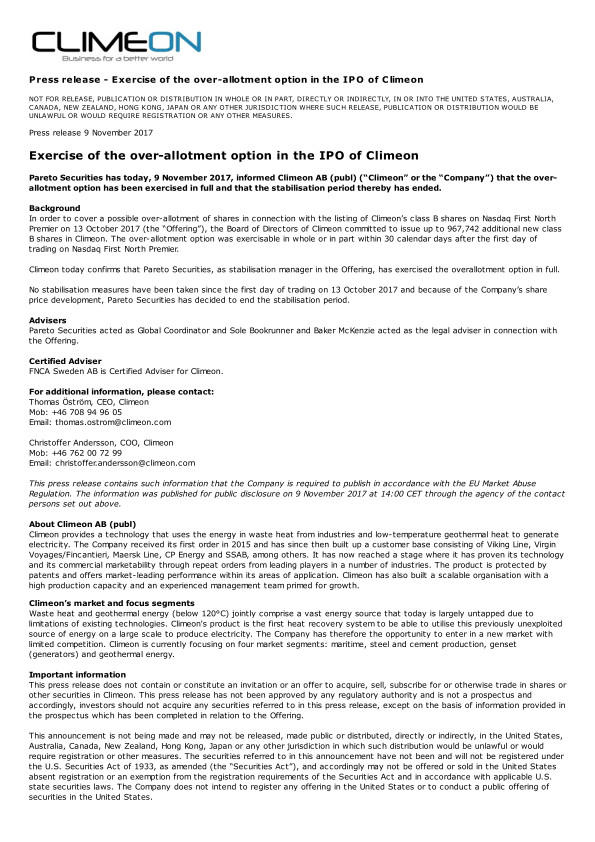