The shareholders are hereby called to the Extraordinary General Meeting in Climeon AB, 556846-1643,
to be held on Tuesday December 17, 2019 at 10.30 hours, at the Company’s premises at
Torshamnsgatan 44 in Kista.

Shareholder wishing to participate in the meeting must:

The shareholders’ rights at the general meeting may be exercised by proxy. Power of attorney must be dated and signed and shall be brought in original to the meeting. Furthermore, representatives of legal entities are requested to bring with them a certified copy of the certificate of registration of the legal entity or similar qualification documents when they attend the meeting. Proxy form is available at the Company’s website.

Item 7: Election of new Board member

Jan Svensson, born 1956, previously CEO and President of Investment AB Latour for 16 years, has significant experience as Board member and Chairman in listed companies. He has as per today positions as Chairman of AB Fagerhult, Troax Group AB, Alimak Group AB and Tomra Systems ASA as well as a Board member of Assa Abloy AB and Loomis AB. Further information regarding Jan Svensson will be available at the company’s website.

The largest shareholders of Climeon, based on shareholdings as per 30 September 2019 in accordance with the so called Q3 model, have appointed the following representatives of the nomination committee as further stipulated in the Company’s press release from 8 November 2019:

The complete proposal of the instructions for the nomination committee is available at the company’s website.

Number of shares and votes

The notice together with other required documents under the Swedish Companies Act will be available at the company and at the company’s website, www.climeon.com/egm19-en/ , as of the date of this notice. The documents will also, at no cost, be sent to shareholders upon request provided that the shareholders state their postal address.

The shareholders are reminded of their right to request information at general meeting from the board of directors and the managing director in accordance with Ch. 7 Section 32 of the Swedish Companies Act. 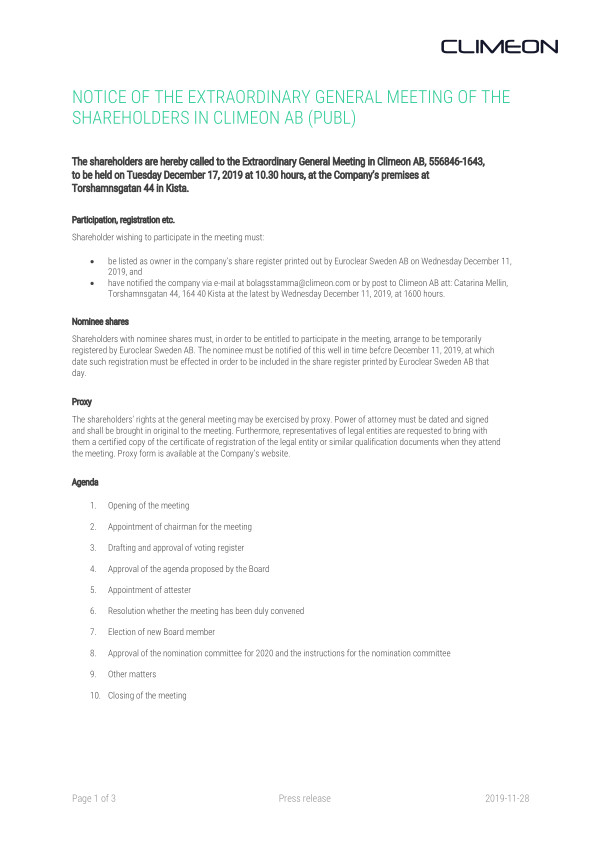 Notice of the Extraordinary General Meeting of the shareholders in Climeon AB (publ)
SHARE THIS ARTICLE
Manage Cookie Consent
To provide the best experiences, we use technologies like cookies to store and/or access device information. Consenting to these technologies will allow us to process data such as browsing behavior or unique IDs on this site. Not consenting or withdrawing consent, may adversely affect certain features and functions.
Manage options Manage services Manage vendors Read more about these purposes
View preferences
{title} {title} {title}