Håkan Osvald is proposed as new Chairman of the Board.

Charlotte Strand, who was appointed at the AGM 2020, resigned during 2021 due to personal reasons. Jan Svensson and Therese Lundstedt have notified that they, due to lack of time, have declined re-election.

The Nomination Committee has in connection with its work considered which characteristics, experience and competencies should complement the Board as Climeon moves into its next development phase. This began during 2021 with the recruitment of Lena Sundqvist as new CEO and the investments into servicing the marine segment, which have intensified during 2022. In addition, the Committee has evaluated and discussed how the continuous renewal process within the Board of Directors best can be effected.

Liselotte Duthu Törnblom, who is proposed as new Board member, was born in 1960 and has a Master of Science in Economics from Uppsala University. Liselotte Duthu Törnblom has been active within the Atlas Copco Group for several years in different positions, amongst other within business control, finance and internal audit and has led a number of successful projects concerning, for example the implementation of new ERP platforms, automation of reporting and tools for financial analysis. Liselotte is since the beginning of 2022 serving within the Atlas Copco Group as Senior Advisor/VP Group Controller and will hand over to her successor during the autumn of 2022. She has international experience from both sales and manufacturing companies within the Atlas Copco Group in France, Belgium and China and also has external board experience from Desotec NV in Belgium.

Peter Carlberg, who is proposed as a new Board member, was born in 1955, has a Bachelor of Science in Engineering from Novia University in Finland and today runs his own consulting business. Peter has broad and international operational experience from both marine and off-shore operations as well as from joint-venture collaborations and business integrations. Amongst other, Peter has served as CEO of Alfa Laval Marine & Diesel Equipment in Sweden and has been the CEO of Alfa Laval's subsidiary in Korea, of Framo AS in Norway and of the South Korean company LHE.co.kr. He has board experience and has been a board member of, amongst others, Consilium AB and MESAB AB.

Håkan Osvald, who is proposed as new Board member as well as Chairman of the Board, was born in 1954, has a law degree from Uppsala University and is today Chief legal officer at Atlas Copco, a position he will leave on April 30, 2022. Håkan has both broad and international experience from management and legal functions within the Atlas Copco Group, including responsibility for M&A globally, stock exchange and compliance as well as other legal matters. He was stationed in the United States for a period and was then part of the local company's management team. He is, since 2012, a member of Atlas Copco's Group Management, which includes handling extensive committee work and assisting the Board as the Board's secretary as well as in the Nomination Committee and at the Annual General Meeting. Håkan serves as board member in several bodies and companies within the Atlas Copco Group, of which he is Chairman of the board in two. He is a board member of the Sweden China Trade Council, the Swedish Foreign Trade Association and Djurgården Hockey.

The Nomination Committee considers that the proposed Board members individually and as a group possess a wide range of competencies and experiences that are relevant for Climeon’s business, but also as regards accounting, capital markets, financing, sustainable businesses, and in generating long-term shareholder value and good board work in general.

With their broad experience within several of the areas mentioned above, the proposed Board members are considered to add important skills and experience to the Board. Liselotte is specifically considered to add important competencies, primarily in accounting, compliance and project management. Peter is considered to be particularly able to add valuable expertise in management, strategic work, financing, product and market development on the marine side, as well as from international business with, among others, shipping companies and shipyards where he has a broad network. Håkan is considered to broaden and deepen the Board's areas of expertise and experience in primarily legal and compliance, but also with his international experience in M&A, financing and negotiation. With regard to his experience from board work, which also includes the role of chairman, Håkan is deemed to be able to contribute to streamlining and improving board work and therefore to be able to fulfil an important role as the new Chairman of the Board.

The Committee considers that the three proposed new Board members will well complement and strengthen the experience and competencies of the present members Anders Lindberg and the founder Thomas Öström. Therefore, the Nomination Committee considers that the proposed Board members together constitute a Board of Directors which meets the requirement of continuity and has the versatility and breadth of competencies, experience and background required with respect to Climeon’s business, development phase and other circumstances.

The Nomination Committee which has been appointed as previously communicated, consists of the following members:

This press release contains such information that Climeon AB (publ) is required to publish in accordance with the EU Market Abuse Regulation. The information was published for public disclosure on 8 April 2022 at 07:30 CET through the agency of the contact persons set out above.

About Climeon AB (publ)
Climeon is a Swedish product company within energy technology. The company's unique technology for thermal power – Heat Power – makes accessible a largely unused energy source and provides sustainable electricity from hot water, around the clock, all year round. Heat Power is a cheap and renewable energy source with the potential to replace much of the energy that today comes from coal, nuclear power, oil and gas. The B share is listed on the Nasdaq First North Premier Growth Market. FNCA Sweden AB is a Certified Adviser, +46 (0) 8-528 00 399 info@fnca.se.
Learn more at climeon.com. 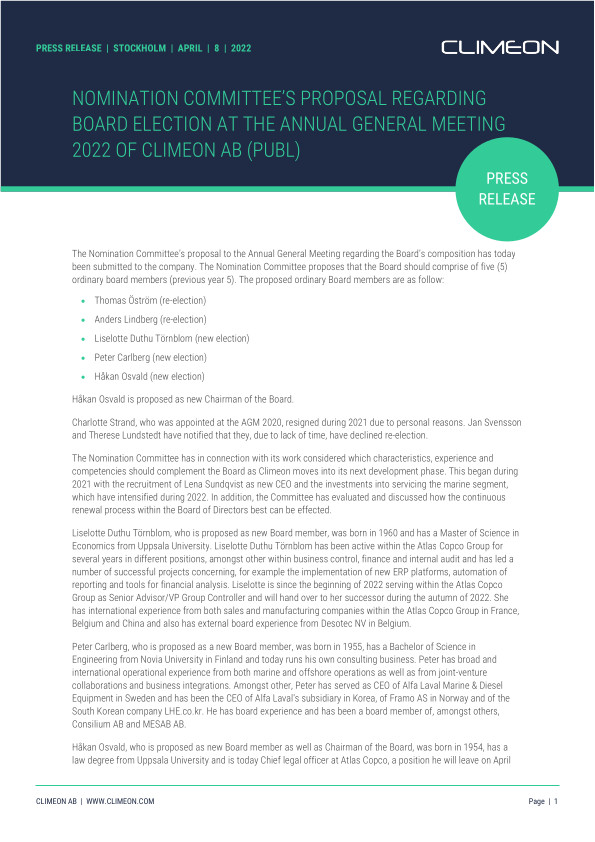 Nomination Committee’s proposal regarding board election at the Annual General Meeting 2022 of Climeon AB (publ)PR_ENG
SHARE THIS ARTICLE
Manage Cookie Consent
To provide the best experiences, we use technologies like cookies to store and/or access device information. Consenting to these technologies will allow us to process data such as browsing behavior or unique IDs on this site. Not consenting or withdrawing consent, may adversely affect certain features and functions.
Manage options Manage services Manage vendors Read more about these purposes
View preferences
{title} {title} {title}