The Nomination Committee’s proposal to the Annual General Meeting regarding the Board’s composition has today been submitted to the company in accordance with the following. The proposed Board members are:

The majority shareholder and co-founder Thomas Öström (who during 2020 left his position as CEO) is pro-posed as new Chairman of the Board, replacing Per Olofsson who, after 9 years on the board whereof 6 years as Chairman, has declined re-election. Jan Svensson is proposed to be re-elected as Vice Chairman, now with special focus on supporting management and the Chairman on strategic and leadership matters.

Board members Olle Bergström and Vivianne Holm have declined re-election. Olle Bergström will remain at the company’s disposal as Senior Advisor for business development matters.

Anders Lindberg, born in 1965 in Sweden, has a Master of Science in Electrical Engineering from the Royal Institute of Technology in Stockholm and a Master of Business Administration from the Stockholm School of Economics. Anders is today the CEO of Dellner, a global supplier of components to the train industry. Prior to this he served as Executive Vice President at Ørstedt (previously Dong Energy), a Danish company within renewable energy and global leader in offshore wind farms, responsible for projects as well as for the EPC (Engineering, Procurement, Construction) organisation. Anders has also worked for Bombardier, Adtranz and ABB. He has board experience from his current position as Vice Chairman of the listed Danish company MT Højgaard.

The Nomination Committee is of the opinion that the existing Board of Directors of Climeon is well-functioning and has in connection with its work considered which characteristics, experiences and competences should complement the Board and how the continuous renewal process within the Board of Directors can best be implemented. The Nomination Committee considers that the proposed Board members, individually and as a group, are competent and have extensive experience from matters regarding the company’s business, but also as regards capital markets, financing, accounting, sustainable business, communication, and marketing, as well as in generating long-term shareholder value and board work in general.

With his experience within several of the areas mentioned above Anders Lindberg is specifically considered to add competence and experience regarding project development and delivery within the renewable energy sector globally, as well as from product development and manufacturing of industrial products. Anders thus further broadens and deepens the Board’s current areas of competence and experience. Therefore, the Nomination Committee considers that the proposed Board members together constitute a Board of Directors which meets the requirement of continuity and has the versatility and competence, experience and back-ground required with respect to Climeon’s business, development phase and other circumstances. The Nomination Committee’s proposal which includes a slightly smaller Board, also implies that the more even gender distribution within the Board achieved at the 2020 AGM remains.

The Nomination Committee, which has been appointed as previously communicated, consists of the following members:

For additional information, please contact:
Anne Holm Rannaleet, Chairman of the Nomination Committee, +46 703 78 95 50, Anne.Rannaleet@ikinvest.com
Per Olofsson, Chairman of the Board of Directors of Climeon, +46 733 11 80 82, per.olofsson@climeon.com

This press release contains such information that Climeon AB (publ) is required to publish in accordance with the EU Market Abuse Regulation. The information was published for public disclosure on 16 March 2021 at 07:30 CET through the agency of the contact persons set out above. 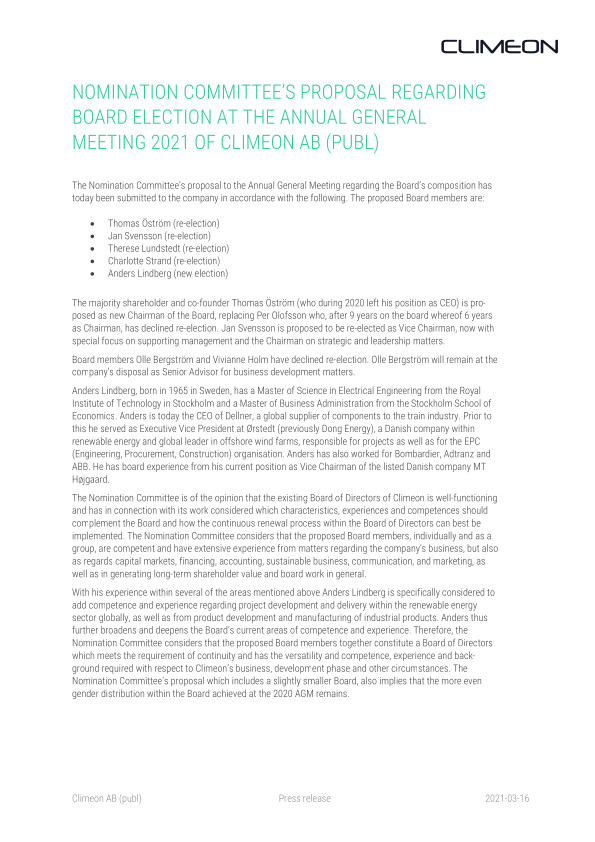 Nomination Committee’s proposal regarding board election at the Annual General Meeting 2021 of Climeon AB (publ)
SHARE THIS ARTICLE
Manage Cookie Consent
To provide the best experiences, we use technologies like cookies to store and/or access device information. Consenting to these technologies will allow us to process data such as browsing behavior or unique IDs on this site. Not consenting or withdrawing consent, may adversely affect certain features and functions.
Manage options Manage services Manage vendors Read more about these purposes
View preferences
{title} {title} {title}