The Nomination Committee’s proposal to the Annual General Meeting regarding the Board’s composition has today been submitted to the company in accordance with the following. The proposed Board members are:

The Board member Stefan Brendgen has declined re-election

Charlotte Strand, born in 1961 in Denmark, has a Master of Science (Cand. Oecon) from Aarhus University in Denmark. Charlotte Strand has several years of experience as CFO/Finance Manager within the Danish energy group Dong Energy and also as Senior Vice President/CFO of the subsidiary Dong Energy Wind Power. Charlotte Strand has also several years of experience from board work and is presently a board member of PostNord AB, Flügger A/S, Per Aarsleff A/S and of Esvagt A/S. She has experience from being the Chairman of the audit committees in two of these companies.

The Nomination Committee is of the opinion that the existing Board of Directors of Climeon is well-functioning and that the Board members individually and as a group possess a wide range of competence and experiences that are relevant for Climeon’s business.

The Nomination Committee has in connection with its work considered which characteristics, experiences and competences should complement the Board when Climeon enters the 2020s and how the continuous renewal process within the Board of Directors can be best executed.

The Nomination Committee considers that the proposed Board members are competent and have extensive experience of matters regarding the company’s business, but also as regards capital markets, financing, accounting, sustainable businesses, communication and marketing and in generating long-term shareholder value and board work in general.

Charlotte Strand is considered to add competence and experience within several of the areas mentioned above and specifically within finance and accounting and can thus broaden and deepen the Board of Director’s competence areas and experiences. Therefore, the Nomination Committee considers that the proposed Board members together constitute a Board of Directors, which meets the requirement of continuity and has the versatility and competence, experience and background required with respect to Climeon’s business, development phase and other circumstances. The Nomination Committee's proposal contributes to a more even gender distribution within the Board.

The Nomination Committee which has been appointed as previously communicated, consists of the following members: 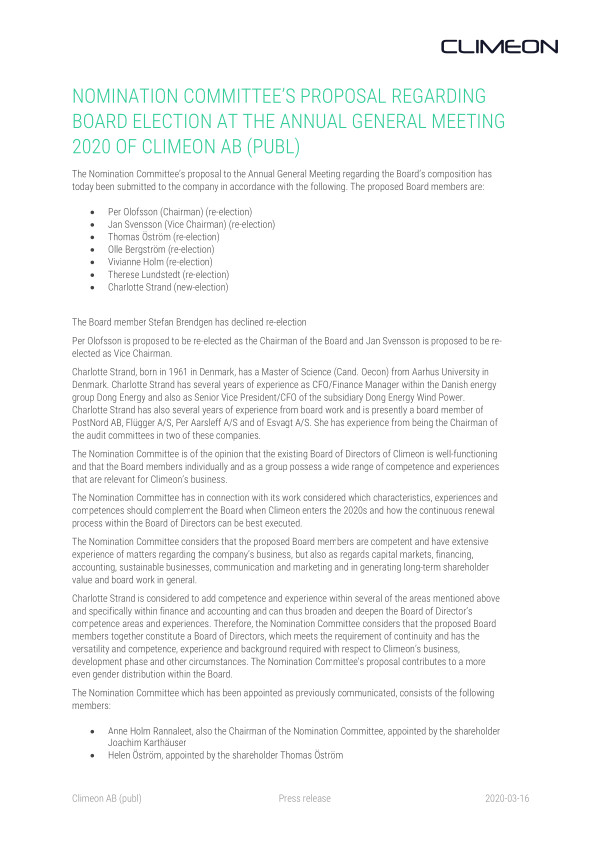 Nomination Committee’s proposal regarding board election at the A​​​​​​​nnual General Meeting 2020 of Climeon AB (publ)
SHARE THIS ARTICLE
Manage Cookie Consent
To provide the best experiences, we use technologies like cookies to store and/or access device information. Consenting to these technologies will allow us to process data such as browsing behavior or unique IDs on this site. Not consenting or withdrawing consent, may adversely affect certain features and functions.
Manage options Manage services Manage vendors Read more about these purposes
View preferences
{title} {title} {title}