Interim report for the third quarter 2017

The quarter in numbers

The third quarter of 2017 has been one of the best quarters in the company's history and contained multiple milestones. We received two orders within new fields (geothermal and container shipping) and the order backlog increased from 25 to 126 modules corresponding over 350 MSEK at the end of the quarter. In parallel, thousands of hours of hard work to design, produce and deliver the top quality that our customers expect.

We are scaling up the business for sustainable and profitable future growth and investing in the build-up of our sales, delivery and service organization, resulting in a higher operational loss. Our revenues during the quarter have, as expected, been modest due to varying time from contract to delivery. The successful capital raise has added a stable base to expand and together with the Nasdaq First North Premier listing will power the company to the next level.

The first modules rolled out of the production site at Mastec in Vaggeryd during September 2017, in line with set quality requirements. Fully ramped production rate at the Vaggeryd site is 2,500 modules per year. The test site in Norrköping has also been prepared to perform fully functional system production tests.

This press release contains such information that Climeon AB (publ) is required to publish in accordance with the EU Market Abuse Regulation. The information was published for public disclosure on November 30th 2017 at 08:00 CET through the agency of the contact persons set out above.

About Climeon AB (publ)
Climeon provides a technology that uses the energy in waste heat from industries and low-temperature geothermal heat to generate electricity. The Company received its first order in 2015 and has since then built up a customer base consisting of Viking Line, Virgin Voyages/Fincantieri, Maersk Line, CP Energy and SSAB, among others. Climeon has now reached a stage where the technology is proven, and the commercial marketability is demonstrated through repeat orders from leading players in a number of industries. The product is protected by patents and offers market-leading performance within its areas of application. Climeon has also built a scalable organisation with a high production capacity and an experienced management team primed for growth.

Climeon’s market and focus segments
Waste heat and geothermal energy (below 120°C) jointly comprise a vast energy source that today is largely untapped due to limitations of existing technologies. Climeon's product is the first heat recovery system to be able to utilise this previously unexploited source of energy on a large scale to produce electricity. The Company has therefore the opportunity to enter in a new market with limited competition. Climeon is currently focusing on four market segments: maritime, steel and cement production, genset (generators) and geothermal energy. 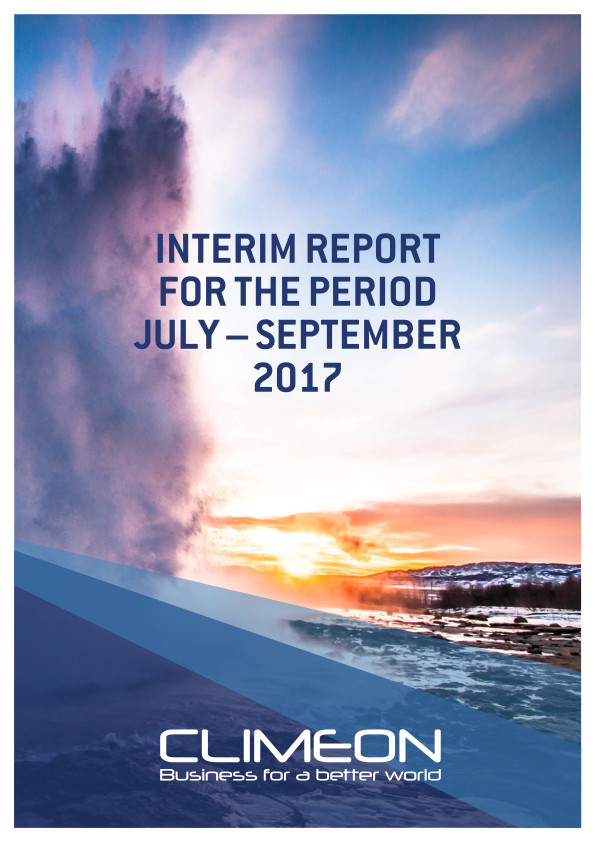 Interim report Climeon AB (publ) the third quarter 2017
SHARE THIS ARTICLE
Manage Cookie Consent
To provide the best experiences, we use technologies like cookies to store and/or access device information. Consenting to these technologies will allow us to process data such as browsing behavior or unique IDs on this site. Not consenting or withdrawing consent, may adversely affect certain features and functions.
Manage options Manage services Manage vendors Read more about these purposes
View preferences
{title} {title} {title}