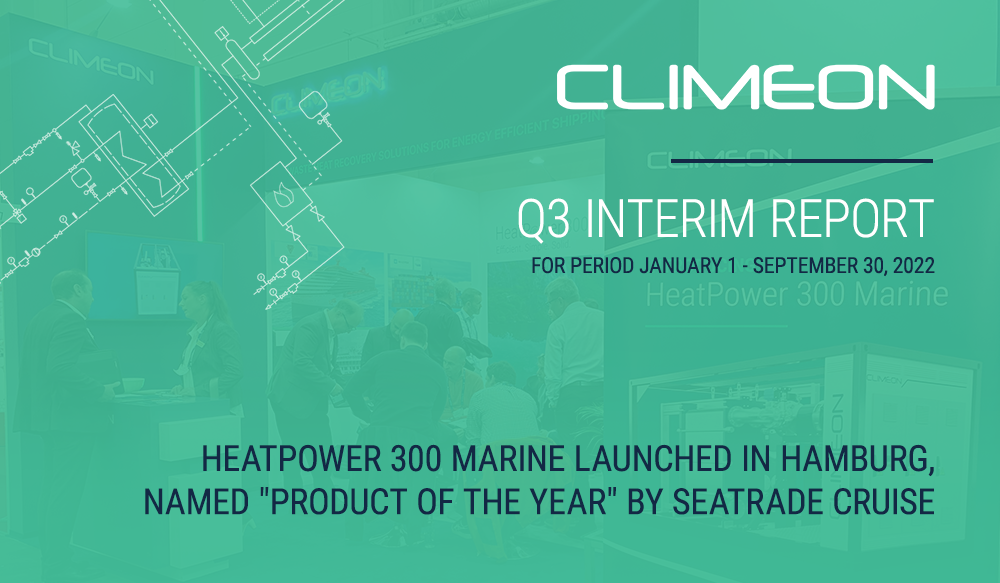 HEATPOWER 300 MARINE LAUNCHED IN HAMBURG, NAMED "PRODUCT OF THE YEAR" BY SEATRADE CRUISE

At the beginning of September, the new product, HeatPower 300 Marine, was successfully launched at the world's largest marine fair, SMM, in Hamburg. Shortly afterwards, it received the award for "Product of the Year 2022" in connection with the Seatrade Cruise Awards 2022 in Malaga, Spain. The number of customer inquiries, regarding both the new marine product and land-based applications for energy and industrial use, increased significantly during the quarter. Climeon's rights issue, which brought the company SEK 160 million before issue costs, was successfully completed.

Climeon Update – Join Us for a Live Teams Meeting
On Tuesday, November 8th, join Climeon's CEO, Lena Sundquist, and CFO, Carl Arnesson, for a brief company update via a live webcast on Microsoft Teams. The event will last for approximately an hour and will end with a Q&A session.

IMPORTANT EVENTS DURING THE PERIOD

A word from our CEO:
HEATPOWER 300 MARINE LAUNCHED DURING SMM AND AWARDED "PRODUCT OF THE YEAR" BY SEATRADE CRUISE 2022

In August, it was a year since I took office as the new CEO at Climeon. In short, it has been an eventful year, both for Climeon and the world around us. We have all faced sharply increased electricity and fuel prices, as well as inflation and interest rates that are far higher than what we have been used to. Not far from us, a full-scale war is going on. We see how the need for increased production of electricity is steadily growing, but also that it must be done in a significantly more energy-efficient and environmentally friendlier way than before.

We are convinced that our HeatPower technology has an important place in the ongoing energy transition and for the future reduction of carbon dioxide emissions. For all renewable energy types, it is important that they are cost-efficient, while also contributing to the reduction of emissions. For Climeon, we set a very ambitious goal when developing our new HeatPower 300 platform. It would, compared to its predecessor, have half the cost per produced kilowatt-hour, kWh, including the costs of installation and operation. It is a goal that we now seem to be reaching, which gives our customers attractive repayment periods, but also profitable business for us at Climeon. The tests of our prototype at our extended test site in Kista continue and have developed well. We have therefore started the commercialization of HeatPower 300.

If I start with the HeatPower 300 for the marine market, we launched our new product to a collective international marine industry, during the SMM in Hamburg at the beginning of September. SMM is the largest trade fair for the marine industry. In 2022 around 50,000 people visited it. The fair is a natural meeting point for all stakeholders – from the shipbuilding industry to shipping companies and authorities – and among these are of course both existing and potential customers and partners. In addition to the dialogues that are already underway with shipping companies, shipyards, and design institutes and that continued during the fair, we were met by a very large interest from many different actors, which was very gratifying. After SMM, we had a large number of interesting contacts and projects to follow up on, something our dedicated marine sales team has been working on continuously since the exhibition. Sales processes in the marine market, on the other hand, are often relatively long as they usually have to go through shipowners, design institutes and shipyards. Anyone who is interested will find the presentations and the material we showed at SMM on our website, https://climeon.com.

Just one week after SMM, our HeatPower 300 for the marine market received the prestigious award "Product of the Year 2022" at the Seatrade Cruise Award event in Malaga, Spain. The jury emphasized both our level of technical innovation and what we can contribute to a more environmentally friendly and cost-effective cruise industry. For me, it is once again proof that our product is just right for the times and delivers what our customers are asking for – fuel savings, more energy efficient ships and reduced carbon dioxide emissions.
In addition to the marine market, during the quarter we met with a number of potential customers in the UK and some countries in the rest of Western Europe, including Sweden, among others. We now see that the HeatPower 300 platform is very well suited, both for larger engine-driven power plants and in several types of industrial processes where HeatPower 300 can be used to produce renewable electricity from waste heat.

In parallel with the development and the initiated commercialization of HeatPower 300, we are of course working further with ongoing and existing installations of HeatPower 150, as well as building up an aftermarket business.

The restructuring program completed earlier this year has given us an organization that is more optimized for our new focus, in size, as well as skills and cost base. But transition takes time and requires resources. Our net sales during the third quarter of the year amounted to SEK 1.2 million and the operating loss to SEK -24.0 million, which everyone realizes is not sustainable in the long
term. Therefore, I am happy that we were able to successfully complete the rights issue that the annual general meeting and the board approved earlier this spring. It means that we received approximately SEK 160 million before issue costs, funds that we use for the finalization and commercialization of HeatPower 300. We have also, after discussions with Svensk Exportkredit and DNB, extended our credit agreement by up to one year, which further strengthens our position. Together with our board, we continue working on a more long-term financing of our operations.

I would like to thank the shareholders and the board for the trust you show. I also extend an equally big thank you to all of Climeon's fantastic employees for the efforts made during an intense and successful quarter.

About Climeon AB (publ)
Climeon is a Swedish product company within energy technology. The company's unique technology for thermal power – Heat Power – makes accessible a largely unused energy source and provides sustainable electricity from hot water, around the clock, all year round. Heat Power is a cheap and renewable energy source with the potential to replace much of the energy that today comes from coal, nuclear power, oil and gas. The B share is listed on the Nasdaq First North Premier Growth Market. FNCA Sweden AB is the Certified Adviser.

This information is information that Climeon is obliged to make public pursuant to the EU Market Abuse Regulation. The information was submitted for publication, through the agency of the contact persons set out above, at 2022-11-02 07:30 CET. 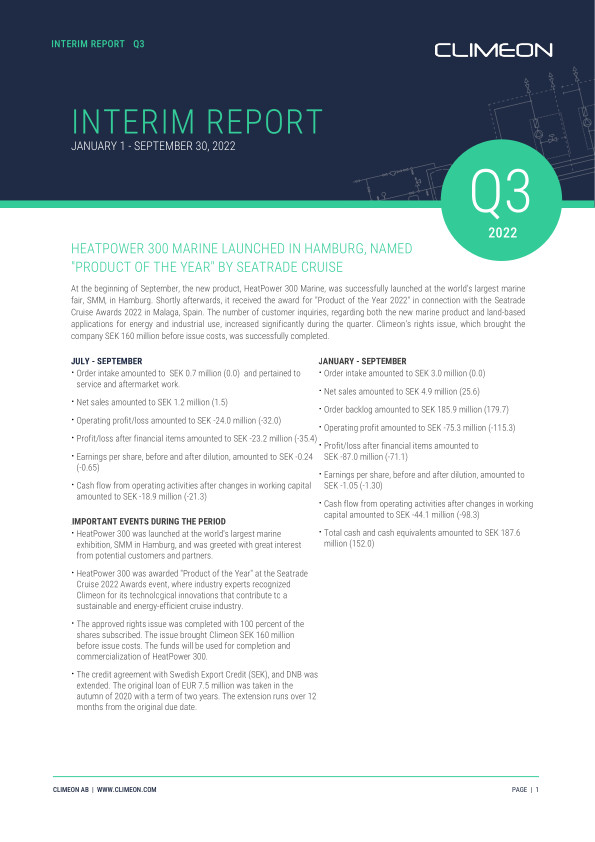 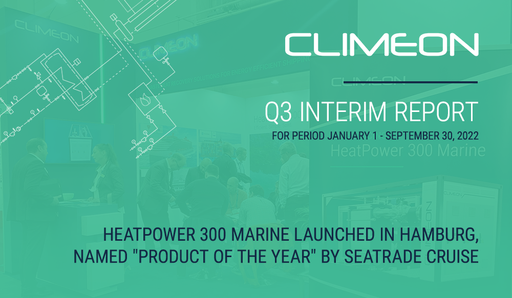