THE EFFICIENCY PROGRAM HAS BEEN IMPLEMENTED

During the quarter, Climeon has, implemented the cost efficiency program presented in July, with the target of creating stronger profitability and a more focused organization. In parallel, the company has continued the development of a new generation of Heat Power technology, with increased profitability as its main goal. Climeon will initially focus on optimizing the product for marine use, and then cost-effectively adapting it to existing and new markets. The collaboration with existing customers in marine, geothermal and industry continues.

After my few  months as CEO, it's time to summarize the third quarter. To begin with, Climeon's technology is more relevant now than ever before. We see a world where environmental awareness and requirements are increasing, while electricity and fuel prices are rising sharply. There is a growing demand for new energy-efficient solutions and environmentally friendly ways to produce electricity. All of these factors signal a positive market trend for Climeon. We will be an important part of the global transition towards clean energy.

Climeon has an established product. Heat Power modules are in operation onboard ships and at geothermal power plants in Iceland and Japan. Every day they deliver renewable electricity to our customers helping them cut costs and decrease emissions. We see the number of inquiries regarding our technology increasing steadily, mainly from the marine industry, but also from other industries. Personally, I think it is fantastic that a small Swedish company has been able to take such a strong position, both in terms of product and brand. As the restrictions following the corona pandemic begin to loosen, at least in Europe, it will become easier to meet both new and potential customers.

At the same time, the past year has been challenging. For the third quarter, net sales amounted to SEK 1.5 million and operating profit to SEK -32 million. For the entire period January – September, the corresponding figures were 25.6 million and -115.3 million, respectively. This is, of course, a development we cannot be happy with. Climeon must become profitable – and the way to get there is focus.

Climeon has been exploring different markets for several years and we know that we have a working technology. At the same time, the next generation of Heat Power needs to be more cost-effective. We need to improve the product's profitability, i.e. increase the number of kilowatt hours that can be produced, in relation to the cost of the product, in order to achieve the profitability that we and our customers want. Climeon is a small company that must make the most of its resources. This means we are now focusing on developing and optimizing Heat Power technology to meet the demands and requirements of the marine industry. The new product will be a platform that can be further developed and adapted for other existing and new markets.

We choose to focus on the marine industry for several reasons. In the marine industry, there is a growing demand driven by international legal requirements and rising fuel prices, as well as an established infrastructure that suits our business model and place in the value chain – selling products, spare parts and service. In the marine industry, we also have thorough knowledge of requirements, as well as an existing customer base. By focusing on optimizing the next generation of Heat Power modules for marine use, and developing a product that meets both customers' expectations and our own profitability requirements, we can in the next step adapt the product to other, land-based, markets.

In parallel with our increased focus on the marine market, we will proceed working within both geothermal and industry. We continue to work closely with Baseload and our other customers, we will of course fulfill all of our commitments. We also continue to follow developments in other industries, such as oil and gas, where interest in our technology is increasing.

The cost efficiency program that was launched in July has been implemented and already we can see the effects it will have. Just as we have applied a clearer focus to our product development strategy, the cost efficiency program has encouraged the same effort throughout all of our business practices. We have streamlined operations and will reduce our local presence in Japan, Taiwan and the UK, where we see collaborations with local partners and retailers as the way forward. Almost all costs for the implementation of the program are taken during the third quarter.

In conclusion, I would like to say that Climeon's purpose is unchanged. We will develop and provide solutions that make us part of the transition to a more sustainable world. What we have done now is that we have chosen a more focused way forward. Climeon is more relevant than ever before, but first we need to return to our core and develop a more profitable product, a more focused business model and a more efficient organization.

This press release contains such information that Climeon AB (publ) is required to publish in accordance with the EU Market Abuse Regulation. The information was published for public disclosure on November 11, 2021 at 07:30 CET through the agency of the contact person set out above.

Climeon is a Swedish product company in energy technology. The company's unique technology for thermal power – Heat Power – makes accessible a largely unused energy source and provides sustainable electricity from hot water, around the clock, all year round. Heat Power is a cheap and renewable energy source with the potential to replace much of the energy that today comes from coal, nuclear power, oil and gas. The B share is listed on the Nasdaq First North Premier Growth Market. FNCA Sweden AB is a Certified Adviser, +46 (0) 8-528 00 399 info@fnca.se. 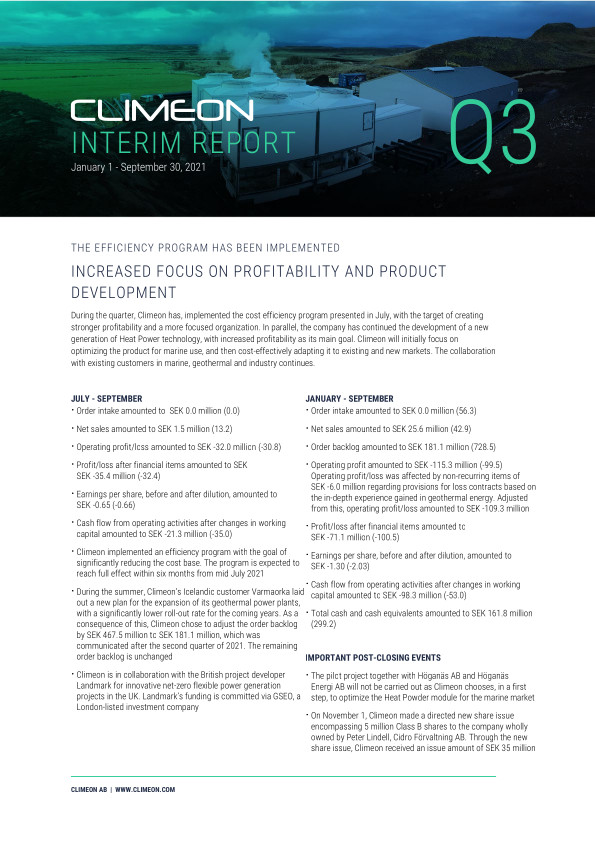 Interim Report for the period 1 January - 30 September 2021
SHARE THIS ARTICLE
Manage Cookie Consent
To provide the best experiences, we use technologies like cookies to store and/or access device information. Consenting to these technologies will allow us to process data such as browsing behavior or unique IDs on this site. Not consenting or withdrawing consent, may adversely affect certain features and functions.
Manage options Manage services Manage vendors Read more about these purposes
View preferences
{title} {title} {title}