Net sales increased significantly during the quarter to SEK 35.3 million (8.9), attributable to deliveries within the customer segments geothermal and maritime. During the third quarter, gradual progress has been made on several fronts and we have worked methodically to close more new deals and at the same time deliver on the existing order backlog. Operating profit amounted to SEK -30.8 million (-23.3). The order backlog totaled SEK 781.6 million (815.6) at the end of the quarter.

The third quarter can be summarized as a demanding period in which new orders have not been achieved, while we have seen good progress in our chosen geographical markets and segments, and more than tripled the revenue.

To increase the order intake, we have in the past months strengthened and re-organized the sales organization, which is now focusing on rolling out our technology in our prioritized markets and segments. We have in several cases underestimated the complexity of the sales and delivery processes where external factors such as grid capacity, building and drilling permits and landlease agreements have had a large impact on the speed of the projects. This, together with partially unaccustomed customers, has made it difficult to get an overview of the projects and has extended lead times. We have seen these effects not only in Iceland and Japan, but also in Hungary and Germany. We have in recent quarters increased and refined our sales efforts in the marine and industrial segments.

We are working systematically to bring up the first power plant in each geographical market, with Japan being next. After more than a year of hard work, we have now received most of the permits for the first power plant in Japan and the work has continued according to plan during the quarter. At the same time, the planning of the second power plant is underway. The goal is to be able to install the modules during the first and second quarters of next year. Despite the time required for these first power plants, our view of the potential in Japan has been strengthened, the political opinion is moving in the right direction and we have increased our local presence.

In Iceland, we clearly see the value of having a power plant to demonstrate on location in the country. Landowners, municipalities, banks, grid owners and electricity producers require to see accurate measurement data and stable power generation to take the next step. The handover of the first power plant to the customer, high uptime and stable power generation with good performance enables us to begin the next phase of the roll-out in Iceland. The planning of the next power plants that will be built during the first half of 2020 is under way.

An important milestone in the maritime segment is that Climeon for the first time has been approved in a Factory Acceptance Test for a customer within container freight. The Heat Power module was brought onboard the ship during the third quarter and the installation continues during the fourth quarter. A number of steps remain in the certification process, which allows for product approval for the first container ship, opening up a larger part of the maritime industry. Commissioning, and thus revenue recognition, can only take place when all approvals are in place. Previously, Climeon’s Heat Power modules have been delivered to five different cruise ships: Viking Grace 2015 and then the newly built Viking Glory and the three Virgin Voyages vessels.

In connection with the UN Climate Change Summit 2019 in New York in October it became clear that the climate issue is high on the agenda in many industries and countries. There is strong momentum in the world for one of our greatest challenges today – reducing carbon dioxide emissions. Within Climeon, the feeling is that we are well-positioned in a sector with great interest and enormous potential, we have a unique product and have passed the first entry barriers in several segments. During the third quarter, we have made gradual progress in all important markets and worked methodically to close more new deals and deliver on the order backlog we have. Now our energy goes into helping the customers get the first power plant in each market up and running. With the learnings from these first installations, we can then accelerate.

This press release contains such information that Climeon AB (publ) is required to publish in accordance with the EU Market Abuse Regulation. The information was published for public disclosure on November 5th, 2019 at 08:00 CET through the agency of the contact persons set out above.

About Climeon AB (publ)
Climeon is a Swedish product company within energy technology. The company’s unique technology for geothermal heat power – Heat Power – makes a large untapped energy resource available and provides sustainable electricity around the clock all year round. Heat Power is a cheap and renewable energy source with the potential of replacing much of the energy that comes from coal, nuclear, oil and gas, today. Climeon aims to become a global leader and the world's number one climate solver. Climeon's B share is listed on Nasdaq First North Premier Growth Market. Certified Adviser is FNCA Sweden AB, +46(0)8-528 00 399, info@fnca.se. 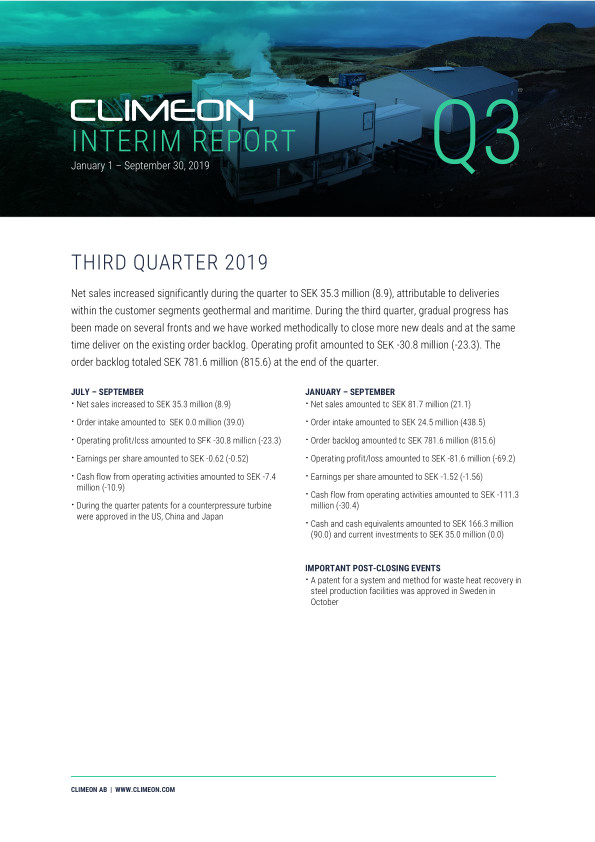 Climeon Interim report January 1 – September 30, 2019
SHARE THIS ARTICLE
Manage Cookie Consent
To provide the best experiences, we use technologies like cookies to store and/or access device information. Consenting to these technologies will allow us to process data such as browsing behavior or unique IDs on this site. Not consenting or withdrawing consent, may adversely affect certain features and functions.
Manage options Manage services Manage vendors Read more about these purposes
View preferences
{title} {title} {title}