Order intake amounted to SEK 39.0 million (293.8) and Climeon received its two first orders within the geothermal segment in Japan during the quarter. In total, the order backlog increased to SEK 815.6 million (352.6). Net sales increased to SEK 8.9 million (0.0). The financial stability is good with a cash balance of SEK 143.6 million, and we are executing according to the business plan that was communicated in connection with the public listing in 2017. The first geothermal power plant in Iceland has now produced electricity for the first time and the company has increased its delivery capacity through a new test and development site in Kista.

• Climeon received its two first orders within geothermal heat power in Japan, amounting to a total value of SEK 39.0 million

• Climeon established a branch office in Iceland, one of the most interesting geographical markets in the world for geothermal heat power

• In September a patent for a radial turbine was granted in the U.S.

FROM PRESTUDY TO ELECTRICITY IN RECORD TIME

Climeon’s first geothermal power plant is starting up and has produced green electricity for the first time. The project has, from prestudy to first production of electricity, been conducted in record time — it took ten months instead of the usual 3–8 years — and we are happy to report that the cost estimates were accurate. This confirms Climeon’s ability to make geothermal energy cost effective at low temperatures, which is extremely positive in terms of continued large-scale rollout.

One important factor in Climeon’s future expansion is how quickly we can test our machines and verify the upgrades we make. In October we inaugurated our new test and development facility in Kista, and at the same time took a big step towards quicker and more effective testing and verification of future upgrades to our system. Now we can finally gather development, delivery and service in one location, which will help us increase our efficiency and delivery capacity.

We have worked hard during the quarter to make progress in the certification and permit processes. We have received positive responses regarding certification within the maritime segment and will be able to deliver to Viking Line on schedule. We have also made progress in the geothermal segment and obtained additional permits. In Germany, however, the customer’s permit processes have dragged on, and the date of delivery must consequently be delayed.

We won two orders within the geothermal segment in the Japanese market, and personnel has been in place there for a couple of months. It is clear that the interest in geothermal heat power is significantly higher than we realized, primarily among land owners with previously unprofitable land areas and spa owners with receding revenues. We will continue working to make progress in the Japanese market and are focusing our sales efforts — the situation is very positive there in terms of both policy and geothermal conditions.

It is therefore especially gratifying that we received a prestigious innovation award in Japan. Along with Tesla and Alstom, we were recognized as one of ten companies with the potential to transform society in the fields of energy and environment. The award was presented at Innovation for Cool Earth Forum, which is hosted annually by the Japanese government.

In its most recent report, the UN Intergovernmental Panel on Climate Change confirms the concern that many of us have experienced after the unusually warm summer and fall. Our emissions must decrease much faster and more dramatically than previously believed. The report concludes that unprecedented changes are required for there even to be a chance of reaching the 1.5 degree target for global warming. The situation is undeniably very grave, and Climeon is working on our part of the solution. We are constantly on the lookout for ways to accelerate our work to hasten the transformation to a fossil-free world.

This press release contains such information that Climeon AB (publ) is required to publish in accordance with the EU Market Abuse Regulation. The information was published for public disclosure on November 22nd 2018 at 08:00 CET through the agency of the contact persons set out above. 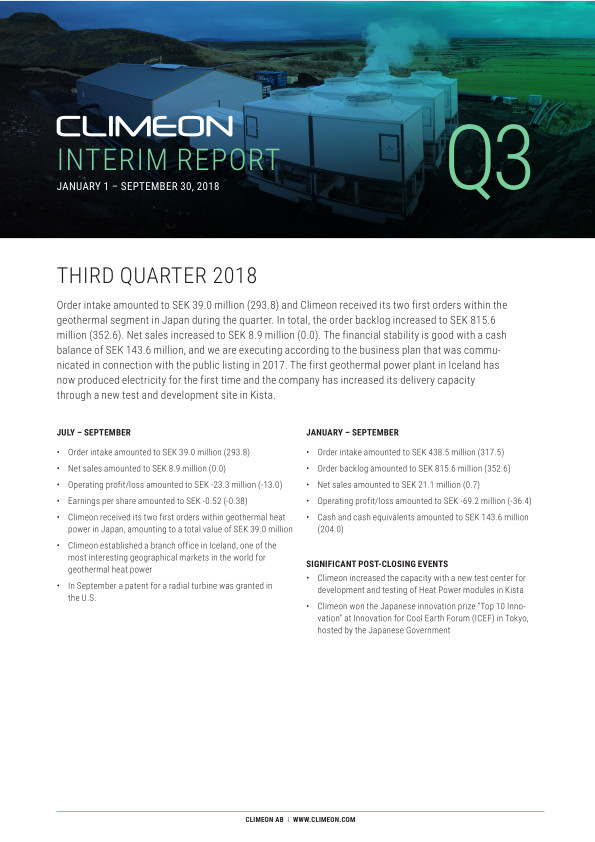 Climeon Interim report January 1 - September 30, 2018
SHARE THIS ARTICLE
Manage Cookie Consent
To provide the best experiences, we use technologies like cookies to store and/or access device information. Consenting to these technologies will allow us to process data such as browsing behavior or unique IDs on this site. Not consenting or withdrawing consent, may adversely affect certain features and functions.
Manage options Manage services Manage vendors Read more about these purposes
View preferences
{title} {title} {title}