Net sales amounted to SEK 14.1 million (22.5) attributable to deliveries within geothermal. During the first quarter, significant progress was made in Japan and in Iceland, despite travel bans and quarantine rules. Climeon also won a new maritime order from the cruise company Havila Voyages. Operating profit amounted to SEK -32.2 million (-16.7). The order backlog totaled SEK 778.8 million (799.3) at the end of the quarter.

The ongoing pandemic has affected us all, both as individuals and as a society. Despite the unusual global situation with tough conditions, Climeon has made great progress on the geothermal side. We have changed our ways of working and no longer send staff to Japan and Iceland in the same way as before. Delivery of components has taken longer than normal. Nevertheless, the team in Japan, with online support from Sweden, managed to complete the installation of the very first power plant in Japan. This is a fantastic milestone for us, and I am immensely impressed by my colleagues.

Japan is one of the toughest geographical markets to enter as a foreign company. In less than two years, we have succeeded in starting a Japanese subsidiary, building a team and setting up a first power plant in Japan, an achievement I am extremely proud of. Now the work continues with fine-tuning the first power plant, getting the second power plant started and then taking on the next projects.

In Iceland, the projects have moved forward and we have extended the contract with Varmaorka. Work on the first power plants took longer than first estimated and we have now agreed on a new plan that extends until the end of 2023. In addition to Heat Power systems, we will also supply control systems and pre-produced pipelines. The total order value remains as before. Work on the installations is also moving forward, in Reykholt we have now installed our prototype for standardized and pre-produced piping, the Backbone, which will make customer installations faster and easier. The goal remains to have the two new power plants up and running this summer.

The consequences of the coronavirus pandemic are still hard to grasp, but everything indicates that this can be a lengthy process. At Climeon, we see that the investment plans in both the maritime and the industrial segment have largely come to a standstill and thus also business negotiations The all time low oil price in combination with tightened investment budgets result in energy efficiency and renewable energy investments having lower priority. At the same time, the many travel restrictions and quarantine rules affect a number of ongoing projects as installation work is delayed in time. The shipyards in the maritime industry have paused parts of their operations and our work onboard the vessels that we have already delivered Heat Power systems to, but have not completed the installation, is delayed.

Despite the challenges the cruise industry is facing, we won an order from Norwegian Havila Voyages during the quarter, which means that we in 2021 and 2022 will install Heat Power systems on their four new cruise ships.

To ensure our financial situation, we have actively renegotiated payment terms, reviewed our costs and slimmed down the organization of consultants. We continue to focus on this, as well as keeping our staff healthy and utilizing our technical solution Climeon Live to fine tune and control the power plants remotely and thus avoid travel. I feel content with the measures we have taken, although a prolonged crisis means uncertainties further into the future. The long-term feeling remains optimistic, especially as the world's investors now realize how volatile fossil investments are. Strong initiatives are being launched globally so that we can get out of this crisis in a green way. Renewable energy is needed to save us from the climate crisis – now let's get out of the global economic crisis that Covid-19 has created in a new, green and long-term sustainable way.

This press release contains such information that Climeon AB (publ) is required to publish in accordance with the EU Market Abuse Regulation. The information was published for public disclosure on May 5th, 2020 at 08:00 CET through the agency of the contact persons set out above.

About Climeon AB (publ)
Climeon is a Swedish product company within energy technology. The company’s unique technology for geothermal heat power – Heat Power – makes a large untapped energy resource available and provides sustainable electricity around the clock all year round. Heat Power is a cheap and renewable energy source with the potential of replacing much of the energy that comes from coal, nuclear, oil and gas, today. Climeon aims to become a global leader and the world's number one climate solver. The B share is listed on Nasdaq First North Premier Growth Market. Certified Adviser is FNCA Sweden AB, +46(0)8-528 00 399, info@fnca.se. 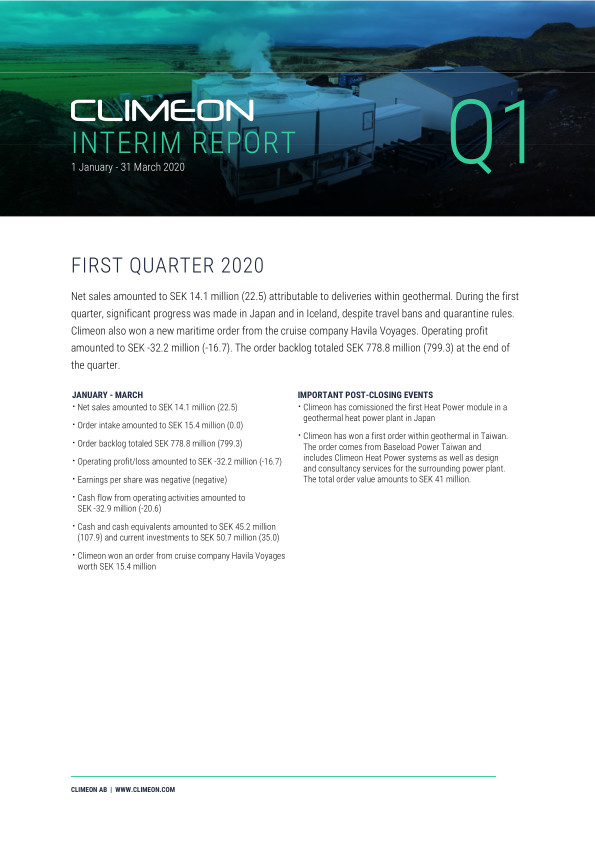 Interim Report for the period January 1 - March 31, 2020
SHARE THIS ARTICLE
Manage Cookie Consent
To provide the best experiences, we use technologies like cookies to store and/or access device information. Consenting to these technologies will allow us to process data such as browsing behavior or unique IDs on this site. Not consenting or withdrawing consent, may adversely affect certain features and functions.
Manage options Manage services Manage vendors Read more about these purposes
View preferences
{title} {title} {title}