Net sales increased during the quarter to SEK 22.5 million (0.0) and operating profit improved to SEK -16.9 million (-20.1) attributable to deliveries within geothermal. The increase in value in Baseload Capital resulted in an improved profit after financial items SEK -7.3 million (-20.5). However, external factors in the form of customers' permitting processes within geothermal remain a challenge that extends current lead times. In total, the order backlog amounted to SEK 799.3 million (404.3) at the end of the quarter.

WELL EQUIPPED FOR A GLOBAL EXPANSION

Since the beginning, we have methodically built Climeon with the aim of becoming a global company with potential to change the energy landscape. During the first months of 2019, we have taken further steps to increase the pace and width of our expansion, by finding strong partners such as Breakthrough Energy Ventures and through a directed new share issue which strengthened the cash position and added strong institutional investors in Europe and the US.

In March 2019, we announced the collaboration with Breakthrough Energy Ventures, a collaboration that gives us access to some of the world's most knowledgeable people within energy, technology and finance. Together with Breakthrough Energy Venture's technical experts, we will work to reduce the costs for our machines as well as for surrounding architecture. We will also work together to further develop the business plan in our focus countries and build ecosystems when we enter new markets.

During the quarter, we delivered our first machines to customers within the geothermal area in Japan. The conditions for low temperature geothermal heat power in Japan are very good and the market potential is great, which is why Japan is a prioritized geographic market for Climeon. However, having had a representative office open for almost a year we can note that the local licensing processes that customers have to go through, including for drilling and connecting electricity, take time. It remains a challenge for us that it takes more time for customers within geothermal to get their sites and permits in place than they and we initially estimated. These external factors extend current lead times.

In Iceland, work with Varmaorka on our first joint geothermal power plant has continued at a good pace. After extensive testing of our machines and the customer's surrounding design, the customer approved the facility in March. Now long-term tests are underway with Varmaorka and the electricity company HS Orka before complete handover of the operation to Varmaorka. Along the way, we have encountered many challenges in the construction of this first geothermal power plant. Now, Varmaorka and Climeon are taking all the learnings from this intensive first power project into the next projects to become even better at building geothermal power plants and supply more local communities with green electricity.

Shortly after the end of the first quarter, Climeon carried out a strongly oversubscribed directed new share issue and raised SEK 249 million from several reputable institutional investors in the Nordic countries, Germany, the UK and the US. With a strengthened cash position and very strong partners, we now have better conditions than ever to continue to build Climeon to become a leading global company.

This press release contains such information that Climeon AB (publ) is required to publish in accordance with the EU Market Abuse Regulation. The information was published for public disclosure on May 9th, 2019 at 08:00 CET through the agency of the contact persons set out above.

About Climeon
Climeon is a Swedish product company within energy technology. The company’s unique technology for geothermal heat power – Heat Power – makes a large untapped energy resource available and provides sustainable electricity around the clock all year round. Heat Power is a cheap and renewable energy source with the potential of replacing much of the energy that comes from coal, nuclear, oil and gas, today. Climeon aims to become a global leader and the world's number one climate solver. The B share is listed on Nasdaq First North Premier. Certified Adviser is FNCA Sweden AB, +46(0)8-528 00 399, info@fnca.se. 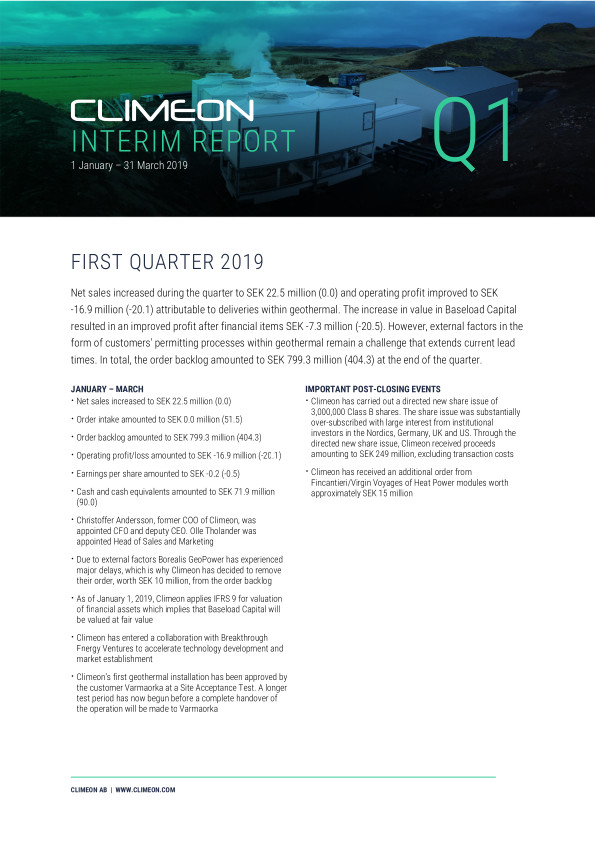 Interim report for the period January 1 - March 31, 2019
SHARE THIS ARTICLE
Manage Cookie Consent
To provide the best experiences, we use technologies like cookies to store and/or access device information. Consenting to these technologies will allow us to process data such as browsing behavior or unique IDs on this site. Not consenting or withdrawing consent, may adversely affect certain features and functions.
Manage options Manage services Manage vendors Read more about these purposes
View preferences
{title} {title} {title}