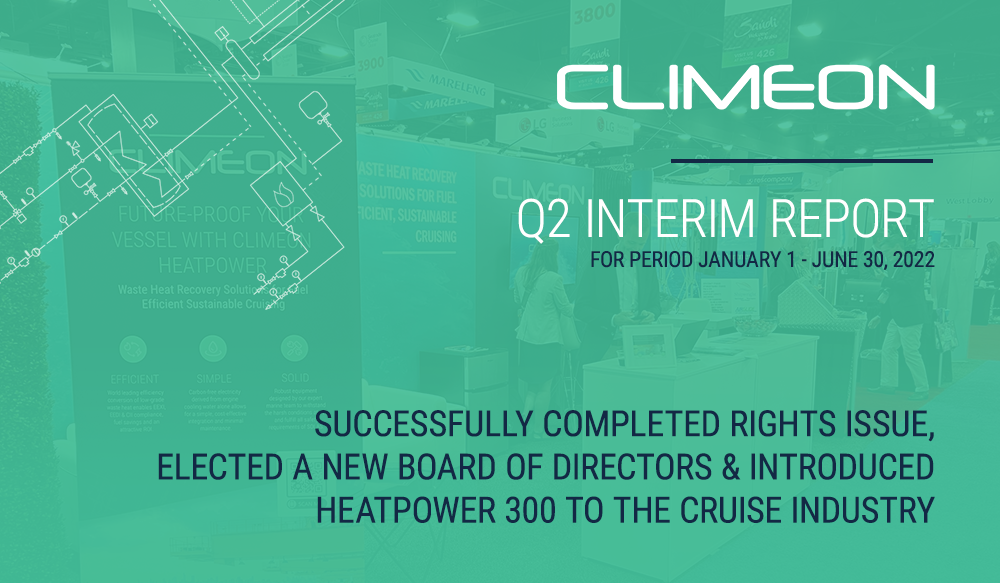 SUCCESSFULLY COMPLETED RIGHTS ISSUE, ELECTED A NEW BOARD OF DIRECTORS AND INTRODUCED HEATPOWER 300 TO THE CRUISE INDUSTRY

During the quarter, Climeon successfully completed a fully guaranteed rights issue, which provided the company with approximately SEK 160 million, before issue costs. At the Annual General Meeting, Liselotte Duthu Törnblom, Peter Carlberg and Håkan Osvald were elected as new members of the board, together with the reelection of Thomas Öström and Anders Lindberg. Håkan Osvald was appointed new Chairman of the Board. Completion of the new product HeatPower 300 proceeded according to plan and was introduced to the cruise industry at the Seatrade cruise industry trade show in Miami. The efficiency program initiated in the summer of 2021 was completed during the spring.

IIMPORTANT EVENTS DURING THE PERIOD

A WORD FROM OUR CEO:
Successful New Issue, New Board of Directors and HeatPower 300 Introduced to the Cruise Industry
The second quarter of 2022 was eventful in several ways. At the end of May, the Board decided on a rights issue which could then be successfully completed in June. The issue was fully guaranteed, which means that Climeon has now received approximately SEK 160 million before issue costs. The increased liquidity that the issue provides is an important component in our continued work, and these are funds that must be managed well. We will use them to continue implementing our strategy and for the completion and commercialization of HeatPower 300. We are very happy and proud of the trust that old and new shareholders have shown us, and we thank you for your support.

Just before the issue, another important change occurred. At Climeon's Annual General Meeting, we acquired a largely new board when Liselotte Duthu Törnblom, Peter Carlberg and Håkan Osvald were elected as new members and Håkan Osvald was also elected as the new chairman of the board. Together, they add new industrial and financial expertise to our board, which also includes our founders Thomas Öström and Anders Lindberg. I look forward to a continued good and fruitful collaboration with the new board constellation.

We need to continue to maintain a strong focus on our financial development. In the second quarter of 2022, Climeon's net sales amounted to SEK 1.8 million and the operating profit to SEK -27.0 million, which is of course not sustainable in the long term. We have an incredible opportunity to develop as a company and achieve the profitability we strive for and it feels satisfying that during the quarter we were able to complete the efficiency program, which Climeon communicated before I took office as CEO almost a year ago. It is gratifying to see that the measures we have implemented during the program have had an effect in the form of reduced costs. We are now continuing, together with the board, the work to ensure our long-term growth, stability, and profitability.

Climeon now has an organization that is better adapted to our current business, both in size and competence, and not least in terms of cost. We have reduced the number of employees abroad and instead gathered strength at our head office, which is the hub of our business. We will continue to work with partners globally in strategic locations for sales and aftermarket services. During the quarter, we signed three important agent agreements with partners in Southern Europe, Germany and the USA, markets which, through their shipbuilding and shipping industries, are very interesting to us.

During the quarter, we introduced our new HeatPower 300 Marine to the cruise industry in conjunction with the Seatrade Cruise Global cruise industry show in Miami. The response to our new product is great from potential marine customers and shows the industry's growing interest in making their vessels more energy efficient. The vessels' fuel costs have a direct impact on the shipping companies' profitability and new, more environmentally friendly fuels are almost always more expensive. Everyone is therefore looking for new ways to reduce fuel costs, CO2 emissions and to make ships even more energy efficient. We should soon be able to offer a new product that meets these needs. Our offer to the marine industry is, simply put, getting stronger.

The latest year's sharp electricity price increases, combined with an increasing need for renewable and efficient power generation, means that we are now experiencing a higher number of inquiries, including those from players outside the marine industry. A good example of this is the United Kingdom, where electricity prices are very high and where renewable energy in the form of wind power is expanding exponentially. As a result, the need for balancing power that can compensate for the varying production of wind power is increasing. Our partner Landmark Power Holdings has, as we previously said, started the construction work for its first power plant, which will produce such balancing power and where Climeon's technology is included to increase energy efficiency. Landmark is now planning for additional power plants, and there is also great interest from other players in the UK to increase energy efficiency at existing power plants using Climeon's technology. Outside the UK, we see great interest from various industries, both in Sweden and the rest of Europe, who want to make their processes more energy efficient. Here, too, interesting new business opportunities are opening for Climeon.

We now have an expanded and improved test site in Kista. The ongoing development work with HeatPower 300 is currently underway there – and we are on schedule. We are focusing on a product that meets customers' requirements and expectations regarding efficient energy production, in relation to the customer’s investment. Simply put: Customers want as many kilowatt hours as possible per krona, dollar or euro invested. This means that in addition to the price of the product, the HeatPower 300 must also be easy to install and require as little maintenance as possible. Climeon, on the other hand, wants a product that is more profitable for us to produce and maintain. No simple equation, but we are on the way, and we know that the potential market is large.

Beyond the purely technical challenges, I can confirm that eased pandemic restrictions is now making life a little easier for us, at least as far as Europe and the United States are concerned. We can meet customers again, trade fairs are happening, and now we can plan to showcase the HeatPower 300 Marine at the premier marine trade fair, SMM in Hamburg this September. At the same time, as is well known, restrictions remain, mainly in China.

The ongoing war in Ukraine is a terrible humanitarian catastrophe. Climeon has neither customers nor operations in the affected areas, but there are fears that the war, together with the pandemic situation in Asia, could have negative effects on our supply chains. We are doing what we can to anticipate and work our way around any potential obstacles.

I am still very impressed with the drive and competence that exists in Climeon's organization, as well as with the motivation that everyone showed during the tough change we made during the year. We can stand tall. We already have products across the world that, every day, all year round, produce renewable electricity for our customers. And now, soon, the next product will come, even more cost-effective and adapted to customer needs.

I would like to thank you again for the trust that existing and new owners have given us through the completed rights issue. We at Climeon will do everything we can to manage that trust and are happy and proud that you want to accompany us on our continued journey.

This information is information that Climeon is obliged to make public pursuant to the EU Market Abuse Regulation. The information was submitted for publication, through the agency of the contact persons set out above, at 2022-07-19 07:30 CEST. 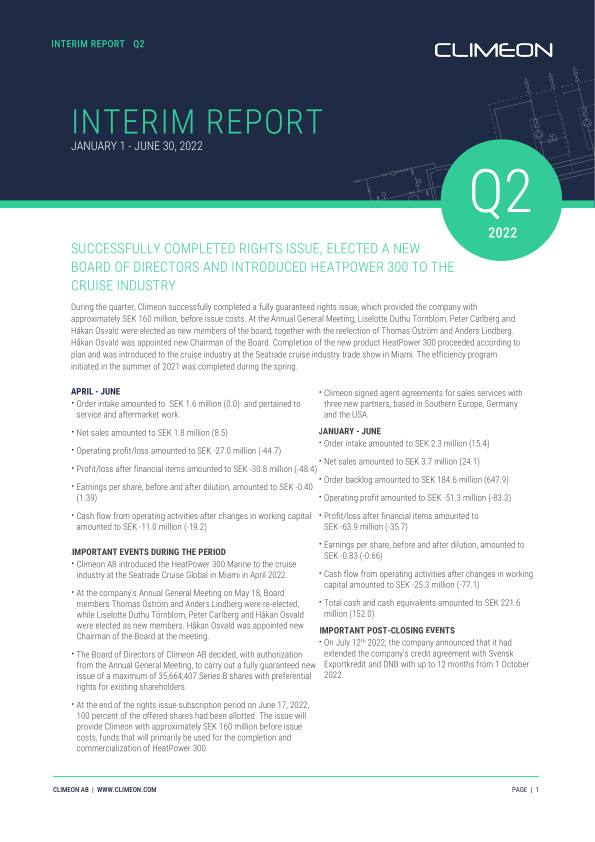 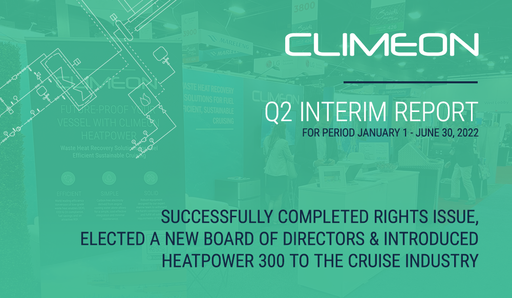 Climeon Q2 2022 Report Image
SHARE THIS ARTICLE
Manage Cookie Consent
To provide the best experiences, we use technologies like cookies to store and/or access device information. Consenting to these technologies will allow us to process data such as browsing behavior or unique IDs on this site. Not consenting or withdrawing consent, may adversely affect certain features and functions.
Manage options Manage services Manage vendors Read more about these purposes
View preferences
{title} {title} {title}