Comments from the CEO
SUCCESS WITHIN GEOTHERMAL DESPITE PANDEMIC

During the quarter, Climeon continued to expand geographically through a first order within geothermal heat power in Taiwan. Suitable geothermal conditions combined with favorable financial incentives from the state in the form of high feed-in tariffs to stimulate green electricity production make Taiwan an interesting market. With this first large order worth SEK 40,9 million we have laid the foundation for an establishment in Taiwan. As much as 40 percent of the order value relates to surrounding services and products, which means that we are offering the customer a more comprehensive solution than before. Selling more complete solutions is an important part of Climeon’s strategy.

In Japan, during the quarter, we commissioned not only the first, but also the second geothermal power plant. I am very proud that we have succeeded in completing these two installations despite the current global situation with severe travel restrictions and delayed transports. Power plant number two has a great symbolic significance as it is next to a traditional Japanese spa, Onsen. Now we can show land owners and spa owners that they can continue their traditional onsens, while gaining access to a new source of income and switching to green energy.

In Iceland, travel restrictions and delayed transports have affected our installation work during the quarter, which is why the two power plants that were planned for commissioning this summer have been delayed. In the Fludir power plant, we have installed a larger pump to increase the water flow and thus the electricity generation from the installed modules. Currently, tests are on-going to evaluate if there is enough hot water to add even more Heat Power modules.

Covid-19 has also had major effects on the maritime industry and many cruise ships remain in port. In June, however, operations in the maritime industry began to cautiously start up again. Our installation team has now been able to board Virgin Voyages’ ship in Italy to continue their work. Installation work on Maersk's vessel, on the other hand, is still delayed due to no one being allowed onboard. We therefore see a risk that commissioning will be postponed over the turn of the year.

Deployment in new markets with a completely new type of technology and solution always faces a long list of challenges where shifted time plans are part of reality. In addition, the global situation with Covid-19 has emerged as a factor. In all our focus areas, we see that ordered power plants take longer to deliver and install right now, which can delay both revenues and repeat orders from existing customers in the short term.

With the intention of getting closer to our customers, we have relocated staff to Taiwan during the quarter and strengthened the local service organization in Japan. To finance this, we have also chosen to re-organize at the headquarters in Kista. This is shown in the quarter through an extra restructuring cost of SEK 3.6 million. We thus continue the work to optimize the organization and review our costs. Overall, we show a positive cash flow and a strengthened position on cash and short-term investments in the quarter, largely thanks to our model with advances in customer orders. We continuously monitor and analyze the global course of events with regard to both operational and financial impact with the intention of ensuring the company's continued development.

Our assessment is that a continued pandemic during the fall will affect our roll-out rate during the year. At the same time, however, demand within geothermal is still very high and largely unaffected by the pandemic. We are dedicated to realizing our potential through hard work and patience for a long time to come. Establishing a new technology takes time, but for every power plant we install, we take one step towards a greener world.

This press release contains such information that Climeon AB (publ) is required to publish in accordance with the EU Market Abuse Regulation. The information was published for public disclosure on August 18th, 2020 at 08:00 CET through the agency of the contact persons set out above. 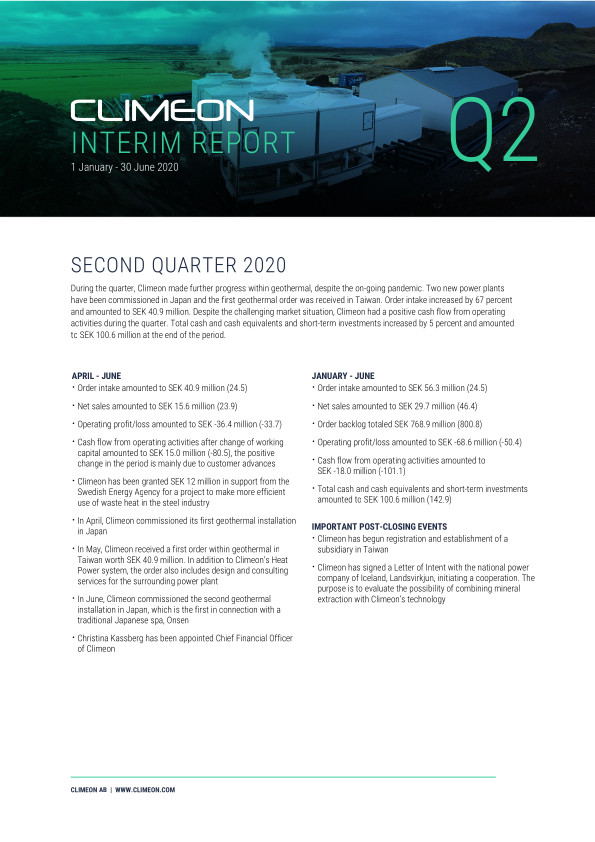 Interim report for the period January 1 - June 30, 2020
SHARE THIS ARTICLE
Manage Cookie Consent
To provide the best experiences, we use technologies like cookies to store and/or access device information. Consenting to these technologies will allow us to process data such as browsing behavior or unique IDs on this site. Not consenting or withdrawing consent, may adversely affect certain features and functions.
Manage options Manage services Manage vendors Read more about these purposes
View preferences
{title} {title} {title}