Net sales increased during the quarter to SEK 23.9 million (12.2), attributable to deliveries within the prioritized customer segments geothermal and maritime. Climeon has expanded globally through the establishment of a subsidiary in Japan. The company sees an increase of interest in Maritime and received an additional order from Fincantieri/Virgin Voyages during the quarter. Operating profit amounted to SEK -33.9 million (-25.8) and profit after financial items amounted to SEK -34.9 million (-25.9). The order backlog totaled SEK 800.8 million (739.7) at the end of the quarter.

During the second quarter we have methodically continued building our organization and broadened our customer offering. We have a very good order backlog with call offs as customers' sites are completed and thereby ready to receive deliveries of Heat Power modules. We are working hard to accelerate the customers' projects and thereby increase the delivery rate of ordered modules. In order to make it easier for our customers and to speed up the start-up process, we offer design and consulting services. This has meant that during the quarter we have been able to bring our customers closer to us, which has led to in-depth collaborations and the ability to influence and increase the deployment rate in our immature markets.

Since we opened a representative office in Japan just over one year ago, we have won several orders in the country, delivered the first Heat Power modules and now we are preparing for the first installation to be made within the next six months together with our customer and local partners. During the second quarter we took the next step by establishing Climeon’s first subsidiary in Japan to create the best possible conditions to develop our business in the country. We have already seen the first positive result in the form of a METI approved construction design for the first power plant.

Every establishment in a new country demands an array of permits and certifications as well as the right partners and an understanding of the specific challenges in each geographical market. Despite thorough and meticulous preparatory work, each installation brings a number of new learnings, especially the first one in each country. Therefore, it is optimal to start with one or a few power plants when establishing a new geographical market. We now have geothermal orders in five strategically selected countries after winning our first order in Hungary during the second quarter. Together with our customers we are now focusing on putting up the first power plant in each country that can serve as a showcase and catalyst for expansion. From a sales standpoint, nothing beats being able to show potential customers power plants where Climeon's technology supplies clean electricity in their own vicinity.

For the maritime industry the requirements from the 2020 Sulphur Directive are only a few months away and in the beginning of the second quarter we received an additional order from Fincantieri/Virgin Voyages. This sent a clear signal to the industry and we now see an increased interest in Climeon’s Heat Power technology. The first Virgin Voyages cruise ship is being prepared for its maiden voyage and on the second ship installation is on-going. By the end of the quarter we also delivered half of the Heat Power modules to the third ship.

During the second quarter we have strengthened the sales organization to meet the increased interest in Climeon’s technology. We have recruited highly experienced people who now work dedicated with Maritime and Industry and with developing our offering in each market segment. At the same time, the collaboration with Breakthrough Energy Ventures, which started in March 2019, has really taken off.

In Iceland, we reached an important milestone as we successfully carried out and completed long-term tests of the Heat Power modules together with our client Varmaorka and the local power company. This also marked the start for Varmaorka to begin preparing the next power plant. The long-term tests and continued operation during the summer was a confirmation that our power plants achieve stable electricity production and provide the electricity grid with a reliable and renewable baseload power, which is exactly what our customers demand. Therefore, we are still convinced that geothermal heat power from low temperatures has the potential to be the largest renewable energy source.

This press release contains such information that Climeon AB (publ) is required to publish in accordance with the EU Market Abuse Regulation. The information was published for public disclosure on August 28th, 2019 at 08:00 CET through the agency of the contact persons set out above. 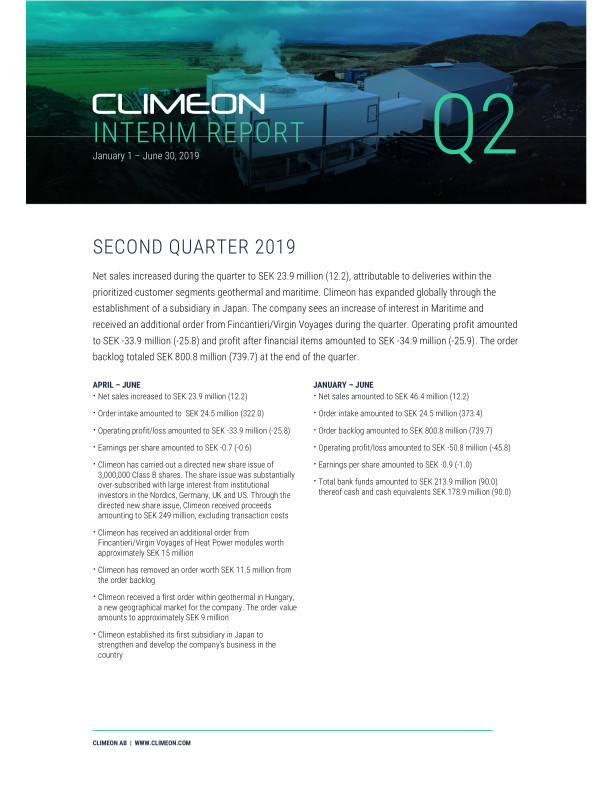 Interim report for the period January 1 - June 30, 2019
SHARE THIS ARTICLE
Manage Cookie Consent
To provide the best experiences, we use technologies like cookies to store and/or access device information. Consenting to these technologies will allow us to process data such as browsing behavior or unique IDs on this site. Not consenting or withdrawing consent, may adversely affect certain features and functions.
Manage options Manage services Manage vendors Read more about these purposes
View preferences
{title} {title} {title}