Order intake increased significantly during the quarter to SEK 322.0 million (13.2), mainly attributable to the fact that Icelandic Varmaorka increased its order to a value of SEK 628.2 million from previous SEK 292.5 million. In total, the order backlog increased to SEK 739.7 million (58.7). Net sales increased to SEK 12.2 million (0.1), and Climeon has after the end of the quarter entered all five defined key countries. Climeon continues to scale up at a high pace, including establishment of a representative office in Japan and a branch office in Iceland. However, certification and permit processes have taken somewhat longer than expected during the period.

FIRST STEPS INTO THE WORLD

This summer has clearly shown the importance of what we’re doing. It has been an alarming summer with water shortage, extreme heat all over the globe and a tropical heat we’ve never seen before in Sweden. The debate about whether this is due to man is loud but having followed the debate for more than 12 years, the answer is, at least in my eyes, very clear. Therefore, it feels incredibly good that we have a solution that can help reverse the trend. We have a long way to go, but also a clear sense of urgency, which triggers thoughts on how we can scale up the business even faster.

Our goal and strategy in the geothermal segment is to win business in five key countries: Iceland, U.S., Canada, Germany and Japan. During the quarter and just after, this has fallen in place with the deals in Canada and Japan as well as the expanded order in Iceland. Within the maritime segment, the goal is to become a standard solution and work is proceeding according to plan. Within the industrial segment, we are also moving forward and see continued great potential.

Generating electricity with our technology is done at a low cost compared to other types of energy, but the customer’s financing of the power plants they build is an important factor in rolling out the technology. Baseload Capital’s work with this is at full speed and executed well above our high expectations. The financing solution Baseload Capital developed was an important component of the expanded order in Iceland.

The quarter’s challenge can be summarized in certifications and permits. Within each new segment and on each new geographic market, certifications and permits are high entry thresholds that delay our deliveries. Both our customers and we have underestimated the time and effort required. These processes have affected each delivery so far and have involved a lot of work on the technical side, but we are continuosly moving forward and the outlook is positive. Some examples of on-going activities are related to new requirements from the classification organizations ABS and DNV in the maritime segment for Viking and Maersk, certifications for the pressure vessel and electrical installation in the U.S. and Canada, electrical coupling permits in Japan, construction permits in Iceland and approval from municipalities in Germany. In the short term, this means a lot of work and uncertain timetables, in the longer term, it is an advantage as it raises entry barriers to competitors.

We reached an important milestone at midsummer, when the first Heat Power modules were delivered to Iceland. They will soon generate green electricity year-round, 24 hours a day in Fludir. The electricity will be used locally, primarily in greenhouses where tomatoes are grown. The next modules for Iceland are in production with planned delivery during the fall 2018.

Our technology has attracted a great deal of attention in Iceland and across the globe. Minister for EU Affairs and Trade Ann Linde, Icelandic Minister for Foreign Affairs Guðlaugur Þór Þórðarson and several other politicians and officials as well as customers, suppliers and other partners attended the groundbreaking ceremony in Iceland that we organized in conjunction with delivering the initial modules. There is great support for what we want to achieve, and many are interested in helping us realize large-scale green electricity production through small-scale geothermal heat power.

With its large order, Varmaorka currently dominates our order backlog. This development is in line with our strategy to initially focus on markets where the path to profitability for both customers and Climeon is the shortest. Essentially, it is the availability of hot water, electricity prices and the local energy situation that determines profitability. All of these factors also clearly point to Japan, where we opened a representative office during the quarter to gain better access to the market. Japan has an abundance of hot springs, among the world’s highest electricity prices and a strong desire to increase the share of domestically produced electricity. This implies a huge potential in Japan and we have so far won two deals there, one within Geothermal and one within Industrial. The first units to Japan are expected to be delivered in the first half of 2019, but even there, the schedule is dependent on local permits.

We are also doing very well within the maritime segment, to which we have delivered the most units so far. During the quarter, together with the shipyard we started the site preparation for the pilot installation on the Maersk ship and we are now waiting for a final certification to complete the installation. There is a great deal of pressure on the entire maritime segment to reduce its climate footprint.

In summary, we have taken great steps forward. Despite delays in the form of extended permit and certification processes, we have continued to deliver according to our plan. This way we work towards our vision of delivering fossil-free heat power and become the world’s number one climate solver.

This press release contains such information that Climeon AB (publ) is required to publish in accordance with the EU Market Abuse Regulation. The information was published for public disclosure on August 29th 2018 at 08:00 CET through the agency of the contact persons set out above. 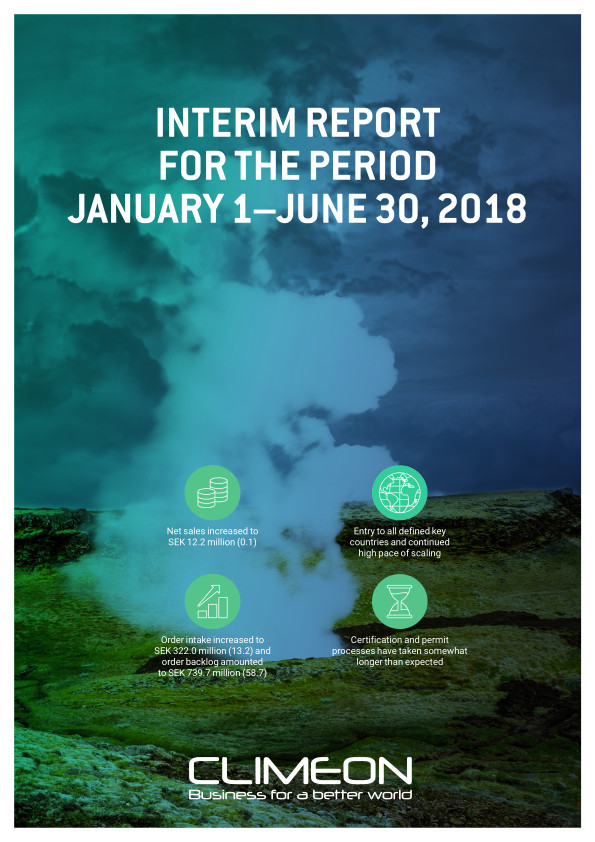 Climeon Interim report January 1 - June 30, 2018
SHARE THIS ARTICLE
Manage Cookie Consent
To provide the best experiences, we use technologies like cookies to store and/or access device information. Consenting to these technologies will allow us to process data such as browsing behavior or unique IDs on this site. Not consenting or withdrawing consent, may adversely affect certain features and functions.
Manage options Manage services Manage vendors Read more about these purposes
View preferences
{title} {title} {title}