We now have a clear breakthrough in our geothermal energy business after following up our first deal on Iceland in August 2017 with deals in the U.S. Germany and Canada. At the stock market listing in October, we thought progress would be slower, so we have been pleasantly surprised by the speed and width of the deals we have won since then.

The deal we closed during the first quarter amounted to over EUR 5 million and came from German energy provider Geoenergie Kirchweidach (GEK). The local community now receives electricity for both housing and 20 hectares of greenhouses cultivating for instance tomatoes, which gives both revenue and many jobs. Germany is the European leader in sustainable energy, and having a successful geothermal installation helps us close more deals both in Germany and beyond. We also fulfilled the key conditions in the deal with Icelandic Varmaorka, and will thus during the current quarter begin delivering the initial seven modules of the 100 in total.

In addition to geothermal heat power, we still see strong potential in waste heat from heavy industries and maritime. During the quarter, payment was received for delivery of the six first modules to Fincantieri/Virgin and we are well positioned within the Maritime segment. Even though the sales cycles in that segment are long, we also see that competitors are struggling to catch up.

At the end of the quarter, our order backlog had increased to SEK 404 million, of which Geothermal energy represented 88 percent. These order will start to be delivered from the second quarter with production increasing in line with sales. During the first quarter we have prepared the work with serial production, increasing purchasing volumes, tests and quality systems that need to be ready when the scale up really takes off with deliveries to Iceland as the first one out. During the first quarter, we had a positive contribution to our working capital, due in part to prepayments from customers.

Attractive deals
We see proof after proof that it is attractive for customers and financial backers to invest in geothermal heat power. The plants produce electricity around the clock, all year long, and electricity producers can sign long-term power-purchase agreements (PPA) with a fixed price (i.e. during 15 years) for the electricity supplied to the grid. A product that makes electricity from hot water thus makes money out of hot water with great predictability for a long time to come. Cash flow and investments can thereby be calculated, which also makes it easier for customers to obtain financing.

The existence of Baseload Capital is a clear advantage since customers frequently need to finance their investments externally. For understandable reasons, banks lack experience in financing our type of heat power, which means that the processes are slower when using a bank. Baseload Capital focuses entirely on sustainable baseload power, and can offer our customers pre-approved loans with favorable conditions. Baseload Capital provided financing for both Icelandic Varmaorka and U.S. Wendel, thereby freeing Climeon from its previous financing commitments to these customers.

Production in focus
Our focus is every bit as centered on production and the entire logistics chain as it is on generating business. In previous years, we have prepared for a future with delivery of much higher volumes and it has paid off. Now this has turned into a tangible plan with a strong organization executing on it together with partners and subcontractors. In addition to our contract manufacturer Mastec increasing its capacity, we are, for example, also expanding the testing capability with an addition site in Kista. Another important aspect involves securing volumes with specific key suppliers. The development unit has a structured approach aimed at enabling more efficient serial production.

The journey towards becoming the world’s Climate Solver number one, involves many steps and intensive work for a long time. We have come a long way from the start-up we were, now taking several steps towards full serial production. The dream has become a vision, a vision with a clear plan.

This press release contains such information that Climeon AB (publ) is required to publish in accordance with the EU Market Abuse Regulation. The information was published for public disclosure on May 18th 2018 at 08:00 CET through the agency of the contact persons set out above. 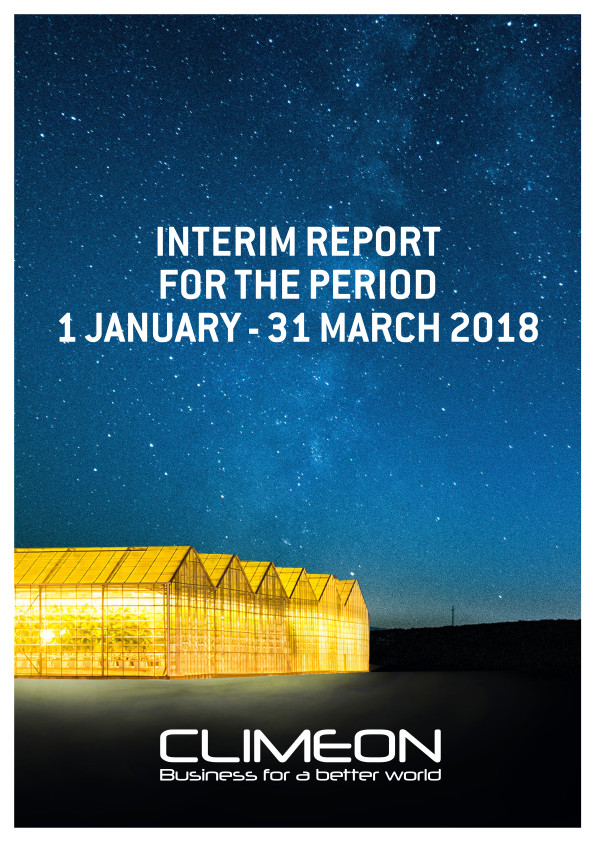 Climeon AB Interim report 1 January - 31 March 2018
SHARE THIS ARTICLE
Manage Cookie Consent
To provide the best experiences, we use technologies like cookies to store and/or access device information. Consenting to these technologies will allow us to process data such as browsing behavior or unique IDs on this site. Not consenting or withdrawing consent, may adversely affect certain features and functions.
Manage options Manage services Manage vendors Read more about these purposes
View preferences
{title} {title} {title}