During the quarter, Climeon's HeatPower was brought into operation on Virgin Voyage's third cruise ship, Resilient Lady, as well as two HeatPower modules in geothermal plants in Japan. The installation work in other projects continued according to plan. The development of the new product HeatPower 300, a platform that is initially optimized for the marine market, was on schedule and the product could be presented to potential customers in connection with the trade fair Seatrade Cruise Global in Miami, USA at the end of April. In the focus area Industry, Climeon's British partner Landmark Power Holding began construction work for a carbon-neutral power generation project where Climeon's products are included to increase energy efficiency.

IMPORTANT EVENTS DURING THE PERIOD

A WORD FROM OUR CEO:

Demand for a transition, away from fossil fuels to a more climate-smart and renewable electricity production and lower CO2 emissions continues to gather momentum. Higher fuel and electricity prices have also strengthened the quest for other energy sources and the incentives to increase energy efficiency are even clearer, which means that Climeon's relevance as part of the energy transition is becoming stronger with each passing day. We can notice this in an ever-increasing number of inquiries about what our in-house developed technology can add both in the form of energy savings and in renewable energy.

We see this clearly in the marine industry, where almost everything is about energy efficiency today. This trend was evident at the Nor-Shipping trade fair in Norway at the beginning of April, as well as at Seatrade Cruise Global in Miami at the end of April. The fuel price development directly impacts the shipping companies' profitability – and new, cleaner, fuels are often more expensive than the old ones. Everyone is looking for ways to reduce costs and reduce emissions. Therefore, it feels good, not only to be able to meet existing and potential customers again, now that trade fairs and events are starting up again, but also because we can soon offer a new product that enables up to five percent reduced fuel consumption on board ships and thus significantly reduced CO2 emissions.

Development and testing of HeatPower 300 continues according to plan at our expanded test site in Kista. During the quarter, we initiated dialogues with key customers about HeatPower 300 and what it offers in the form of energy improvements and fuel savings on board ships. HeatPower 300 reduces fuel consumption and CO2 emissions, can work with low temperatures, is easily integrated on newbuildings and existing vessels, needs minimal maintenance and, thanks to its capacity, has an attractive payback period for the customer. We get a product that is more affordable – and more profitable for us to produce and maintain. And the market is big.

Things have also started to move in our other markets. We were able to successfully commission two modules in Japan and we now clearly see that interest in geothermal energy is growing. Several geothermal initiatives are currently underway in the United States, as well as in Europe and Asia, although many of these are in their initial stages. In the focus area Industry, our partner Landmark has begun construction work for a new natural gas-fired, but at the same time carbon-neutral power plant project. Climeon's technology contributes by increasing the energy efficiency of the power plants and this, together with carbon capture, makes CO2 emissions very low. It is a very exciting project.

Overall, the situation feels brighter than last autumn, but there are also challenges. The situation in Europe has eased considerably in terms of the effects of the Corona pandemic, including travel to the USA and Asia, although it still requires a lot of extra planning. The conflict in Ukraine began at the end of February and is nothing short of a humanitarian catastrophe for all parties involved. It is still too early to predict how what is happening, may affect Climeon. We have no customers, or operations, in the affected areas, but there are signs that the conflict, together with ongoing lockdowns in parts of Asia due to the Corona pandemic, could have negative effects on our supply chains in terms of components and other important inputs. We monitor the development closely and take measures to minimize the effects.

Our financial development is something that we continue to focus on. For the first quarter of 2022, net sales amounted to SEK 1.8 million, mainly in the form of revenue for service and our aftermarket business. Operating profit amounted to SEK –24.3 million. It is gratifying to see that the measures we implemented as part of the efficiency program that ran during the second half of 2021, have had an effect in the form of reduced costs. In parallel with this, we continue, together with the Board, the work of securing our own long-term financing.

Looking ahead, I see that our new product HeatPower 300 Marin – and the upcoming versions for other markets based on it – can create entirely different possibilities for profitability for our customers and, not least, for Climeon as a company. As part of the development, we of course also continuously evaluate various patentable opportunities. Hence, during the quarter we applied for another patent for our patent portfolio.

During the nine months that have passed since I got the privilege of leading Climeon, I have become deeply impressed with the skills and drive that exist in Climeon's organization. We can be proud of what we have achieved, both in a longer perspective from long before I was involved, to the readjustment and the journey forward that we are now embarking on. We already have products in place that help our customers produce clean, fossil-free electricity from a resource that would otherwise be wasted. Now we have taken the next step and for the first time been able to show a wide and relevant audience what we plan to achieve with HeatPower 300 Marin and the coming product family. Now we continue what we started, to build an even more efficient and goal-oriented Climeon and an even more efficient and profitable product portfolio, to contribute to the transition to a more climate-smart society.

We, in the Climeon team, look forward to a continued exciting 2022

For the full report, please see attached file below.

This report contains information Climeon AB (publ) is required to publish in accordance with the EU Market Abuse Regulation. The information was published, through the care of the above contact persons, for publication May 4, 2022 at 07:30 (CET).

About Climeon AB (publ)
Climeon is a Swedish product company within energy technology. The company's unique technology for thermal power – Heat Power – makes accessible a largely unused energy source and provides sustainable electricity from hot water, around the clock, all year round. Heat Power is a cheap and renewable energy source with the potential to replace much of the energy that today comes from coal, nuclear power, oil and gas. The B share is listed on the Nasdaq First North Premier Growth Market. FNCA Sweden AB is a Certified Adviser, +46 (0) 8-528 00 399 info@fnca.se.
Learn more at climeon.com. 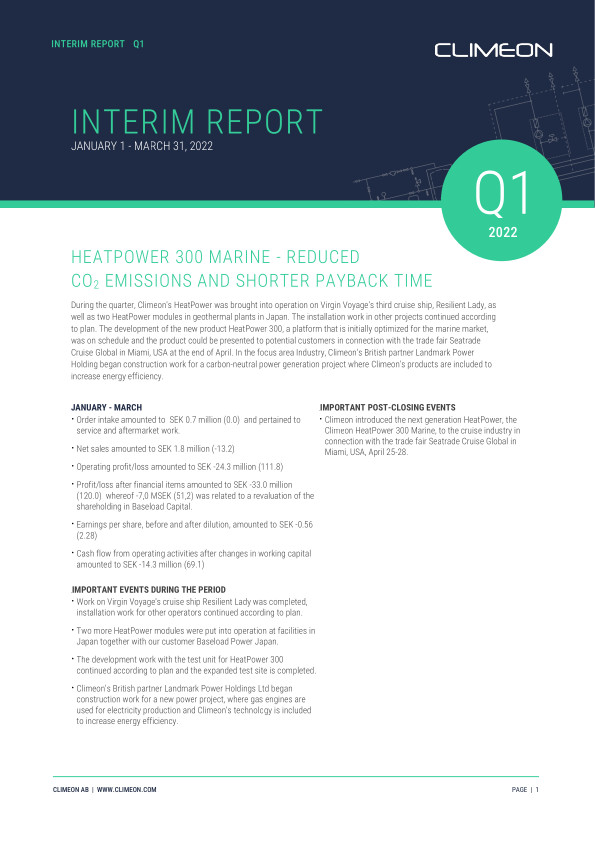 Delårsrapport 2022_Q1 ENG
SHARE THIS ARTICLE
Manage Cookie Consent
To provide the best experiences, we use technologies like cookies to store and/or access device information. Consenting to these technologies will allow us to process data such as browsing behavior or unique IDs on this site. Not consenting or withdrawing consent, may adversely affect certain features and functions.
Manage options Manage services Manage vendors Read more about these purposes
View preferences
{title} {title} {title}