The first quarter 2021 was characterized by deliveries and installations. Net sales amounted to SEK 15.5 million (14.1) making the quarter the best in terms of revenue in 15 months. Chevron’s investment into Baseload Capital increased the value of Climeon’s shareholding and had a positive earnings effect in net financial items of SEK 51.2 million. Profit/loss after financial items amounted to SEK 12.7 million (-31.5). During the first quarter, Climeon put two Heat Power modules into operation at the Reykholt geothermal power plant in Iceland, and we participated in sea trials for Virgin Voyages’ second vessel where the Heat Power modules were approved for operation. Around the same time, we also delivered six modules to the fourth Virgin Voyages ship. Shortly after the end of the quarter, four more Heat Power modules were put into operation at the power plant in Flúðir, Iceland.

AN EVENTFUL QUARTER WITH OPERATIONAL PROGRESS

Just like 2020, the first quarter of the year offered achievements as well as challenges. We have continued the efficiency work that started in 2020, commissioned several Heat Power installations and received an award from the Royal Swedish Academy of Engineering Sciences (IVA). At the same time, we have had to continue living with the restrictions the pandemic implies. Practical restrictions still make it difficult to travel and meet customers, and sometimes even to carry out planned installations and commissioning.

Revenues for the quarter are in full parity with, and even slightly above, revenues for the first quarter of 2020. This makes this quarter the best, in terms of revenue, in 15 months. Seen over a rolling twelve-month period, we have not been able to move forward as fast as we would have liked. Of course, we are working to make up for this as the conditions normalizes. A more efficient organization, where we both reduce the management team and add new competence, is one such measure.

Interest in green solutions is growing all over the world, not least within the EU, which aims to make a "green restart" after the pandemic. It is also interesting that Chevron joins as a partner in our partner Baseload Capital. Chevron adds knowledge about exploration and drilling that can help open up the market within geothermal energy. The investment also increases the value of our ownership in Baseload Capital, which had a positive effect on earnings of SEK 51.2 million in the quarter.

In geothermal, we commissioned our second installation in Iceland, at the Reykholt geothermal power plant. Shortly after the end of the quarter, we were also able to put four more modules into operation at the Flúðir power plant, which thereby doubled its capacity. The expansion in Flúðir is a practical example of how modularity and standardization enable a step-by-step expansion. In Taiwan, the customer continues their drilling work for the first power plant and Climeon contributes with consulting and design work.

In maritime, we see a growing activity and an increasing interest, where the International Maritime Organization's work to reduce greenhouse gas emissions from international shipping is driving development. During the quarter, we participated in sea trials for Virgin Voyages’ second vessel, and the modules were approved for operation. At the same time, we also delivered modules to the fourth Virgin Voyages vessel.

Within industrial, we initiated an interesting sales cooperation with Tomoe Engineering during the quarter, with the intention of selling Climeon's technology to industrial customers in Japan. Furthermore, our customer within land-based engines in the UK, is now in the final stages of having their financing solution in place.

In practical terms, we continue to produce to be in phase with future deliveries and to be able to support our customers with shortened project timelines. We also continue to develop our technology to create even more efficient solutions with better performance and higher profitability. This is something a company such as Climeon always must work with. As part of this, we intend to build a first pilot installation within the industry this year, where we will test our new solution with more than 50 percent higher power output.

Climeon has a unique technology and is currently developing a new market. There is still a lot to do, and it will require continued hard work, but we both can and will play an important role in the green transition. I look forward to a continued exciting and rewarding 2021.

This press release contains such information that Climeon AB (publ) is required to publish in accordance with the EU Market Abuse Regulation. The information was published for public disclosure on March 29th, 2021 at 09:00 CET through the agency of the contact persons set out above. 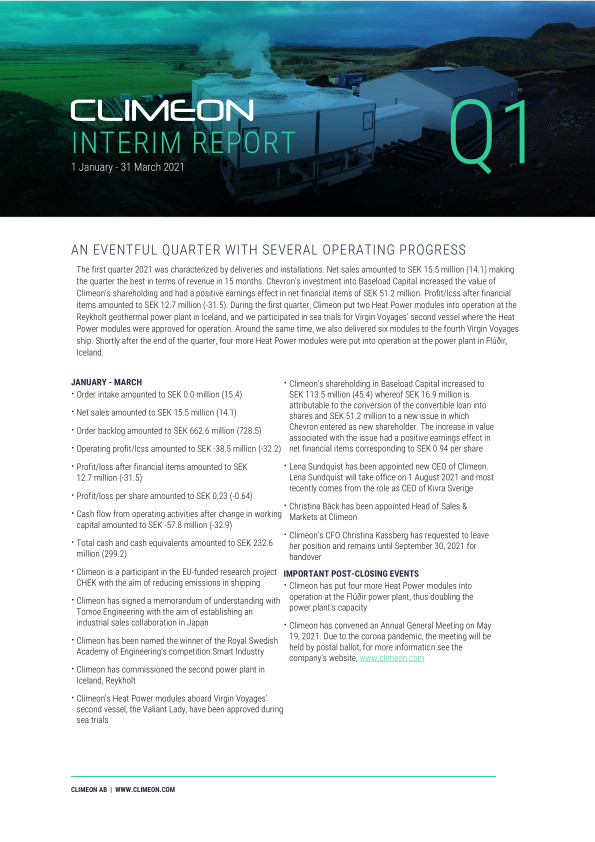 Interim Report for the period 1 January - 31 March 2021
SHARE THIS ARTICLE
Manage Cookie Consent
To provide the best experiences, we use technologies like cookies to store and/or access device information. Consenting to these technologies will allow us to process data such as browsing behavior or unique IDs on this site. Not consenting or withdrawing consent, may adversely affect certain features and functions.
Manage options Manage services Manage vendors Read more about these purposes
View preferences
{title} {title} {title}