INCREASED FOCUS ON MARITIME AND ON ENSURED PROFITABILITY
During the quarter, Climeon carried out commissioning for customers within both maritime and geothermal energy. Six modules were commissioned on Virgin Voyages' ship Valiant Lady and four Heat Power modules at the Flúðir power plant. Climeon's Icelandic customer Varmaorka has laid out a new plan for expansion of geothermal power plants, with a significantly lower roll-out rate for the coming years. As a consequence of this, Climeon has decided, after the end of the quarter, to reduce the order backlog by SEK 467.5 million to SEK 180.3 million. Furthermore, Climeon decided to implement an efficiency program with the goal of ensuring a long-term profitable and sustainable company with top-class products. Interest from customers in the maritime market continues to grow, and Climeon is increasing its focus in that area.

IMPORTANT POST-CLOSING EVENTS
Climeon's Icelandic customer Varmaorka has laid out a new plan for the expansion of geothermal power plants with a significantly lower roll-out rate for the coming years. As a consequence of this, Climeon has decided to reduce the order backlog by SEK 467.5 million to SEK 180.3 million.

Climeon has also decided to implement an efficiency program with the goal of ensuring a long-term profitable and sustainable company.

INCREASED FOCUS ON MARITIME AND ON ENSURED PROFITABILITY

The second quarter has passed and Climeon can look back on an eventful period. In maritime, we commissioned six modules on Virgin Voyages 'vessel Valiant Lady, and DNV (Det Norske Veritas) approved two modules for Havila Voyages' cruise ships. Interest from the maritime market has continued to grow and the number of inquiries is increasing. We also commissioned four modules at Varmaorka's Flúðir power plant in Iceland, which thus doubled its capacity. On the industry side, we signed an agreement with Höganäs AB and Höganäs Energi AB for a pilot installation where we can evaluate and test future technology solutions.

At the same time, during the quarter we thoroughly analyzed what is needed, commercially and technically, to ensure Climeon as a long-term profitable and sustainable company. There are several factors that affect Climeon's profitability. The Corona pandemic is of course one such, as it has delayed project rollouts and it has been difficult to meet customers in the field. We also see that the relationship between the price of the equipment and its performance is becoming increasingly important for our customers' investment decisions. The energy transition must take place, and we are part of it, but it requires profitability for both us and our customers if it is to work.

So far, Climeon has worked broadly in most areas and markets, and has now come to a consensus, to focus, be more selective and adapt our technology for different markets. Our lesson is that geothermal energy is is a slow market, where it is challenging to achieve profitability. This is reinforced by the fact that our Icelandic customer Varmaorka has laid out a much less ambitious plan for the expansion of geothermal power plants. We have therefore, after the end of the quarter, decided to reduce our order backlog in Iceland by SEK 467.5 million. We continue the collaboration according to the new adapted plan.

Today we see a growing demand and more and more opportunities in maritime and will therefore increase our investments in that area. Demand for systems that reduce environmental impact is strong and the existing fleet of our potential customers is very large, while continuing to grow. Our assessment is that we have an offer and a technology that is more viable for this market. Another advantage is that maritime and industry, both technically and in terms of requirements, have more in common with each other than with geothermal energy, which facilitates our development work. The conclusion is therefore simple – we will in future have an increased focus on maritime. It will be an important means of achieving the profitability we strive for.

It is obvious that our technical solutions should be at the forefront, both in terms of price and performance. The next generation Heat Power modules will still be based on our HP150 design and module system, but will have a higher power output, a lower price and be easier to install.

Over the past year, we have worked in various ways to streamline our organization and reduce costs. We are now intensifying our work through a new efficiency program with the goal of significantly reducing the cost base and ensuring Climeon as a long-term profitable and sustainable company with top-class products. The program is expected to reach full effect within six months. We look forward to presenting more about this at a capital market day in the autumn.

As this is my last CEO letter, I would like to thank both employees and customers. I would also like to welcome Climeon's new CEO, Lena Sundquist. In conclusion, I emphasize that I am convinced Climeon has an increasingly important role to play in the green transition – and has the prerequisits to take on that role. In the future, I will follow that journey with great interest. Jan Bardell, CEO Climeon

This press release contains such information that Climeon AB (publ) is required to publish in accordance with the EU Market Abuse Regulation. The information was published for public disclosure on July 19th, 2021 at 07:30 CET through the agency of the contact persons set out above.

Climeon is a Swedish product company within energy technology. The company’s unique technology for geothermal heat power – Heat Power – makes a large untapped energy resource available and provides sustainable electricity around the clock all year round. Heat Power is a cheap and renewable energy source with the potential of replacing much of the energy that comes from coal, nuclear, oil and gas, today. Climeon’s B share is listed on Nasdaq First North Premier Growth Market. Certified Adviser is FNCA Sweden AB, +46(0)8-528 00 399, info@fnca.se. 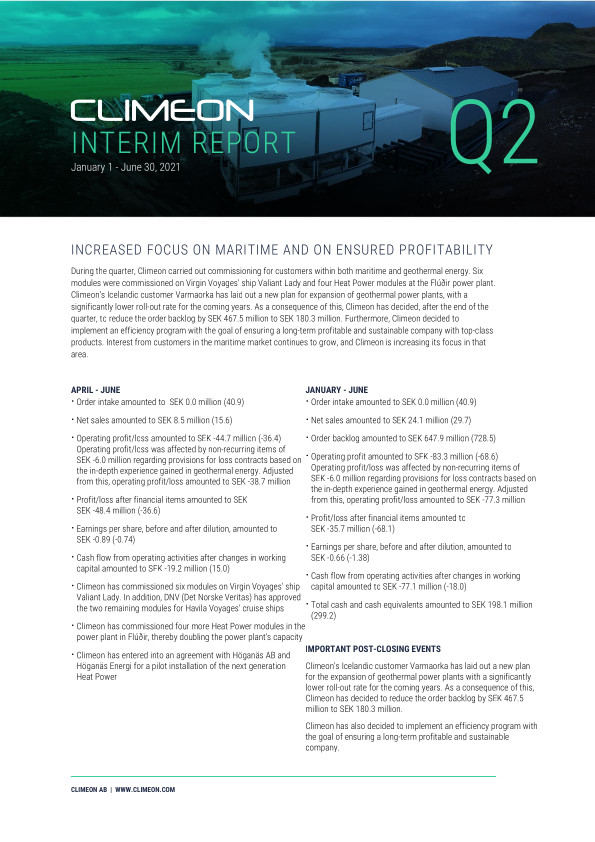 Interim Report for the period 1 January - 31 June 2021
SHARE THIS ARTICLE
Manage Cookie Consent
To provide the best experiences, we use technologies like cookies to store and/or access device information. Consenting to these technologies will allow us to process data such as browsing behavior or unique IDs on this site. Not consenting or withdrawing consent, may adversely affect certain features and functions.
Manage options Manage services Manage vendors Read more about these purposes
View preferences
{title} {title} {title}