Climeon has received an order from Norwegian Havila Voyages to install Heat Power systems on four newly built vessels. The order value amounts to about SEK 15.4 million, and delivery is expected to take place in 2021 and 2022.

– We are happy that an established company such as Havila takes the sustainability issue seriously and therefore has decided to recover the waste heat when they build new cruise ships, says Thomas Öström, CEO of Climeon.

– We look forward to working with Havila Voyages and to be part of making traveling along the Norwegian coast more sustainable. Climeon’s technology can reduce the ships’ carbon dioxide emissions and we believe that we have an important role to play in the maritime industry’s green transition, continues Thomas Öström.

– For us, it is important to protect nature, and in this case the Norwegian coastline where our ships will sail. Climeon’s technology is an important piece of the puzzle as we build the most sustainable cruise ships that will be sailing along the Norwegian coast, says Arild Myrvoll, CEO of Havila Voyages.

Havila Voyages AS is a family-owned, Norwegian company which during 2021 will take four new environmentally friendly cruise ships into operation to sail along the Norwegian coast. The ships are part of Havila’s contract with the Norwegian Ministry of Transport for travels between Bergen and Kirkenes. Havila Voyages is owned by the Norwegian business group Havila, which operates in the maritime industry, within transport and tourism.

Havila Voyages’ four ships Havila Capella, Havila Castor, Havila Polaris and Havila Pollux are all 124.1 meters long, 22 meters wide and able to carry 640 passengers. The ships will be powered by a hybrid LNG (liquefied natural gas) and battery system. The battery packs will allow the ships to sail without noise and emissions for up to four hours. The combination of LNG, batteries and innovative technologies such as Climeon’s Heat Power system will make the vessels the most environmentally friendly cruise ships in service along the Norwegian coast, according to Havila Voyages.

The four ships are currently being built in Tersan in Turkey. Climeon’s Heat Power systems are to be delivered during 2021 and 2022. The engineering work has already started, and the first two vessels will be prepared to install the Climeon plants during operation upon delivery from the shipyard. The last two vessels will have an operational Climeon plant installed before the vessels are delivered from the shipyard. 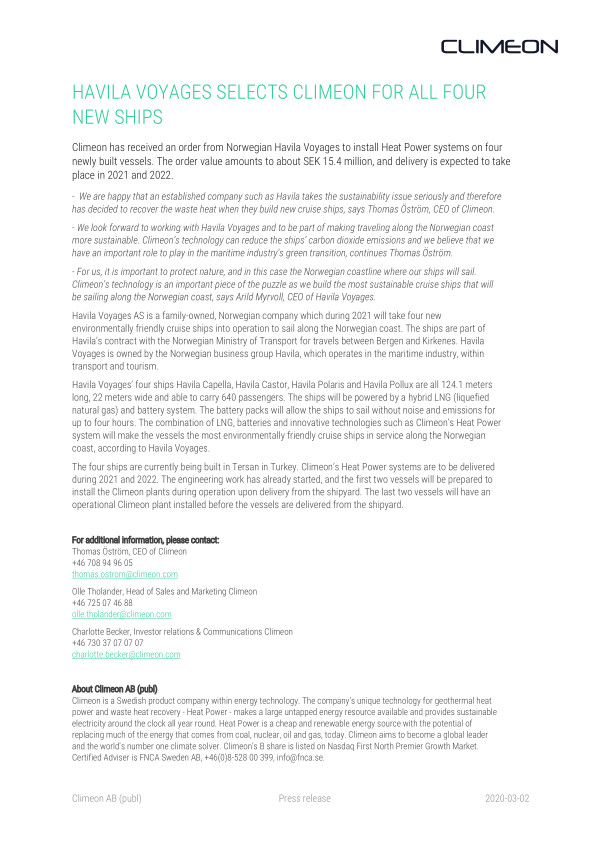 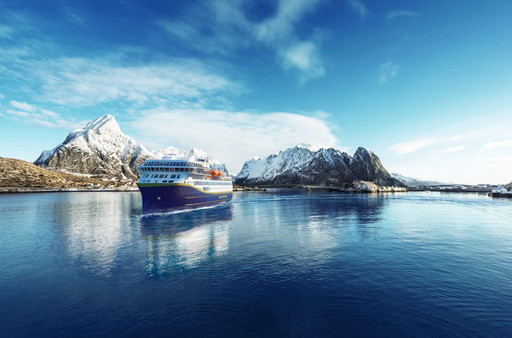 Climeon and Havila Voyages team
SHARE THIS ARTICLE
Manage Cookie Consent
To provide the best experiences, we use technologies like cookies to store and/or access device information. Consenting to these technologies will allow us to process data such as browsing behavior or unique IDs on this site. Not consenting or withdrawing consent, may adversely affect certain features and functions.
Manage options Manage services Manage vendors Read more about these purposes
View preferences
{title} {title} {title}