Her Royal Highness Crown Princess Victoria of Sweden and Håkan Juholt, Ambassador of Sweden to Iceland, has today visited Climeon’s first geothermal power plant in Iceland where water from the ground is turned into clean electricity.

– To see how hot water from the ground turns in to clean electricity is incredibly interesting and exciting, says H.R.H. Crown Princess Victoria. It makes me proud to see how innovative Swedish companies contribute to a more sustainable development, the Crown Princess continues.

The royal visit began with a happy and curious Crown Princess being guided around the power plant. After that, Veronica Wänman, Climeon's Country Manager and Key Account Manager in Iceland, as well as Joachim Karthäuser, co-founder and CTO of Climeon, briefly presented the company's history and technology. Then the Crown Princess was given the opportunity to build an animated version of Climeon’s Heat Power module as well as run the power plant herself.

– The potential of geothermal heat power as an energy source seems enormous and here, Iceland and Climeon has come a long way. It was very inspiring to see how these small power plants strengthen the countryside through locally produced renewable energy, says H.K.H. Crown Princess Victoria.

– Climeon and Varmaorka's collaboration is a brilliant example of great business relations between Sweden and Iceland, says Håkan Juholt, Sweden's ambassador to Iceland.

-For me it was evident to show Climeon's power plant in Fludír to the Crown Princess, as she is passionate about environmental issues, innovation and Nordic cooperation, Håkan Juholt continues. I hope Climeon's success in Iceland can inspire more Swedish companies to do business here, says Håkan Juholt.

– We are honored that the Crown Princess with her passion for the environment choses to visit Climeon's geothermal power plant here in Iceland. We hope that we have been able to show the Crown Princess a good example of how Swedish innovation and Nordic cooperation can help fight the climate crisis, says Veronica Wänman, Climeon's Country Manager and Key Account Manager in Iceland.

About Climeon AB (publ)
Climeon is a Swedish product company within energy technology. The company’s unique technology for heat power from low temperatures- Heat Power – makes a large untapped energy resource available and provides sustainable electricity around the clock all year round. Heat Power is a cheap and renewable energy source with the potential of replacing much of the energy that comes from coal, nuclear, oil and gas, today.

Climeon was founded in 2011 by Thomas Öström and Joachim Karthäuser. The Company has just over 80 employees and work with customers such as SSAB, Viking Line, Maersk, Virgin Voyages and Varmaorka. Climeons B share is listed on Nasdaq First North Premier. Certified Adviser is FNCA Sweden AB, +46(0)8-528 00 399, info@fnca.se. 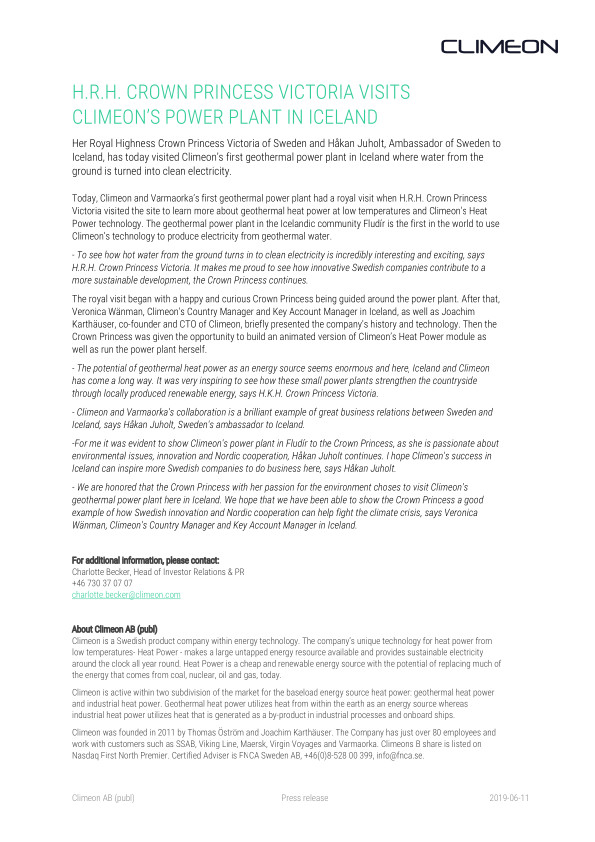