Through their Family office, the Switzerland-based cleantech investors Fredrik and Ann-Helene Ljungström have acquired 625,000 B-shares in Climeon, valued at SEK 30 million, from the company’s CEO Thomas Öström on July 7th, 2020. The transaction was reported to the PDMR transaction register at the Swedish Financial Supervisory Authority the same day.

– Getting the right investors who can contribute to Climeon’s development is crucial for me as a founder of the company, comments Thomas Öström, CEO of Climeon.

– The opportunity to get Fredrik and Ann-Helene Ljungström as shareholders and to be able to learn from their experiences with other cleantech companies is why I decided to sell a small part of my holding, Thomas Öström continues.

– The sale is made solely for personal financial reasons and constitutes only a small part of my total holdings. I am Climeon's largest shareholder and intend to continue to be so, concludes Thomas Öström.

– Thomas and his team are building a very exciting company in the energy sector that is crucial to the climate challenges we have ahead of us, comments Fredrik Ljungström.

– I have previously been involved in several other successful cleantech companies and look forward to now being part of Climeon's continued journey, says Fredrik Ljungström.

To emphasize the long-term investment, Fredrik and Ann-Helene Ljungström have, on their own initiative, requested that the purchased shares have a lock-up of 12 months. Thomas Öström has similarly requested on his own initiative that all remaining shares he owns in Climeon should be covered by a 12-month lock-up.Following the transaction, Thomas Öström owns 8,900,000 Class A shares and 130,900 Class B shares in Climeon, which represents 18.3 percent of the capital and 51.7 percent of the votes.

Pareto Securities AB has been broker in connection with the transaction.

About Climeon AB (publ)
Climeon is a Swedish product company within energy technology. The company’s unique technology for geothermal heat power – Heat Power – makes a large untapped energy resource available and provides sustainable electricity around the clock all year round. Heat Power is a cheap and renewable energy source with the potential of replacing much of the energy that comes from coal, nuclear, oil and gas, today. The B share is listed on Nasdaq First North Premier. Certified Adviser is FNCA Sweden AB, +46(0)8-528 00 399, info@fnca.se. 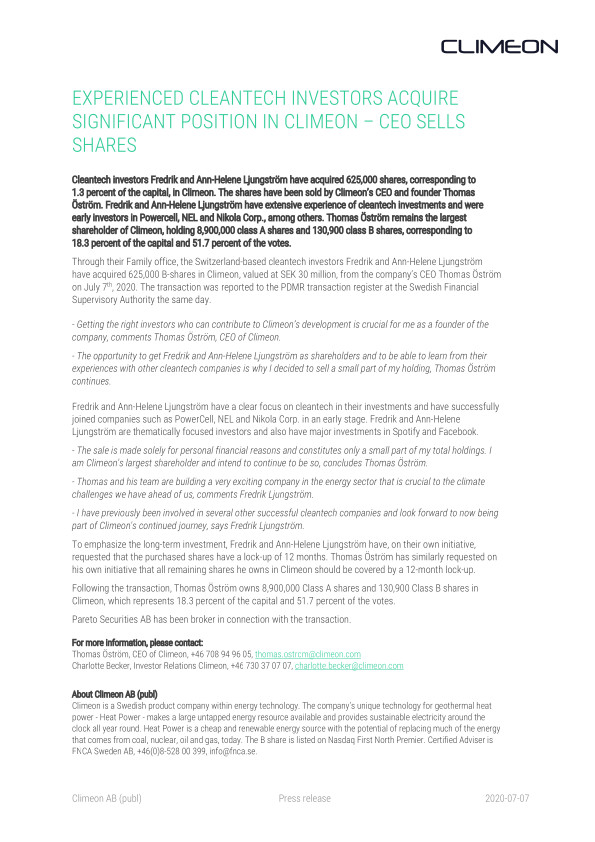 Experienced cleantech investors acquire significant position in Climeon – CEO sells shares
SHARE THIS ARTICLE
Manage Cookie Consent
To provide the best experiences, we use technologies like cookies to store and/or access device information. Consenting to these technologies will allow us to process data such as browsing behavior or unique IDs on this site. Not consenting or withdrawing consent, may adversely affect certain features and functions.
Manage options Manage services Manage vendors Read more about these purposes
View preferences
{title} {title} {title}