The nomination committee of Climeon AB (publ) for the Annual General Meeting 2022 (AGM) is hereby announced. It consists of the following representatives appointed by the four largest shareholders as per 31 of August 2021, plus the Chairman of the Board:

The Nomination Committee has been appointed in accordance with the instructions for the Nomination Committee adopted at the Annual General Meeting held on 19 May 2021, pursuant to which the Chairman of the Board has contacted the four largest shareholders as per 31 August 2021 and asked them whether they want to appoint a representative to the nomination committee. In the event that a shareholder does not wish to appoint a representative the next largest shareholder has been asked. The nomination committee will appoint one of its members as Chairman.

A list of the largest shareholders of Climeon as per 31 August 2021 is available at the company’s website: https://climeon.com/investor-english-share-information/#largest-shareholders.

For additional information, please contact:
Thomas Öström, Chairman of the Board of Climeon
+46 (0)733 11 80 82
thomas.ostrom@climeon.com

Climeon is a Swedish product company within energy technology. The company’s unique technology for geothermal heat power – Heat Power – makes a large untapped energy resource available and provides sustainable electricity around the clock all year round. Heat Power is a cheap and renewable energy source with the potential of replacing much of the energy that comes from coal, nuclear, oil and gas, today. Climeon’s B share is listed on Nasdaq First North Premier Growth Market. Certified Adviser is FNCA Sweden AB, +46(0)8-528 00 399, info@fnca.se. 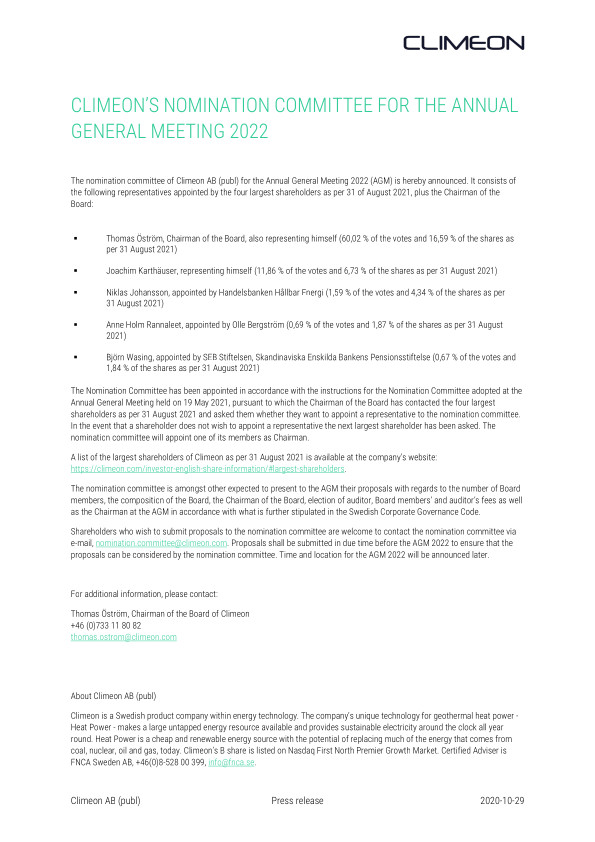 Climeon’s nomination committee for the Annual General Meeting 2022
SHARE THIS ARTICLE
Manage Cookie Consent
To provide the best experiences, we use technologies like cookies to store and/or access device information. Consenting to these technologies will allow us to process data such as browsing behavior or unique IDs on this site. Not consenting or withdrawing consent, may adversely affect certain features and functions.
Manage options Manage services Manage vendors Read more about these purposes
View preferences
{title} {title} {title}