Climeon has won a first order in the United Kingdom worth SEK 19.7 million, including software licenses and service fees. The order is the first where Climeon’s Heat Power modules will be utilized to recover waste heat from reciprocating engines based on natural gas.

Energy Circle and CooperÖstlund are developing a fleet of Flex Power plus power plants based on Natural Gas and Liquefied Natural Gas (LNG) reciprocating engines and will be delivering power to the national UK Electricity Grid. The Climeon Heat Power modules are part of a highly efficient power plant concept, where the modules help increase efficiency of the power plant, and thus decrease CO2 emissions.

– The Heat Power modules are a great way to improve the efficiency of the engines and decrease the emissions. We look forward to continuing and extending our cooperation with Climeon, says Duncan McPherson, CEO of CooperÖstlund.

Reciprocating engines are highly efficient, distributed and modular power generators, technologically similar to the engines used in the maritime segment where Climeon has been active since 2015. These power plants are used to produce a baseload power and to balance the grid stability, a need that has increased with the rising amounts of intermittent solar and wind power projects that have been installed in recent years.

This press release contains such information that Climeon AB (publ) is required to publish in accordance with the EU Market Abuse Regulation. The information was published for public disclosure on December 9th, 2019 at 10:55 CET through the agency of the contact person set out above. 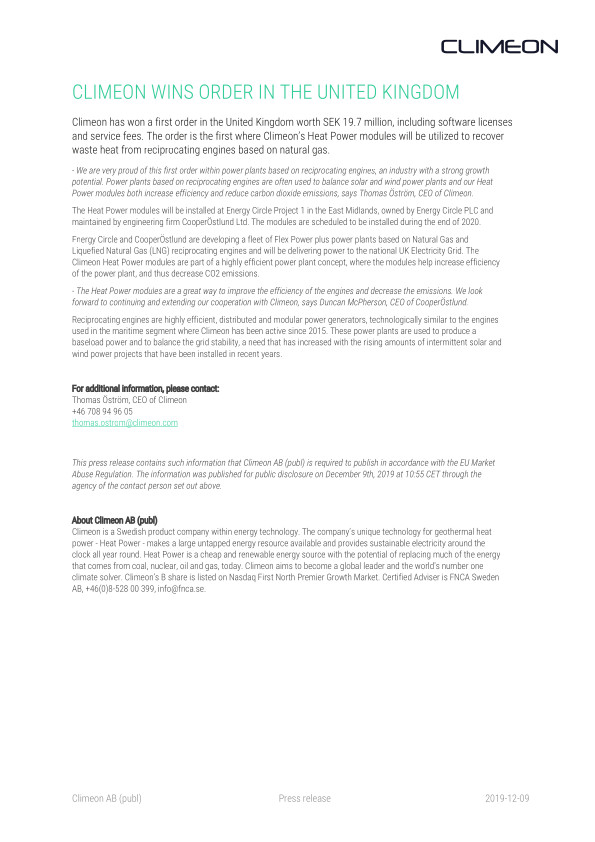 Climeon wins order in the United Kingdom
SHARE THIS ARTICLE
Manage Cookie Consent
To provide the best experiences, we use technologies like cookies to store and/or access device information. Consenting to these technologies will allow us to process data such as browsing behavior or unique IDs on this site. Not consenting or withdrawing consent, may adversely affect certain features and functions.
Manage options Manage services Manage vendors Read more about these purposes
View preferences
{title} {title} {title}