Climeon has won a first order within geothermal heat power in Hungary, entering a new geographical market. The Heat Power modules are purchased by Baseload Capital Hungary and the order value amounts to about SEK 9 million.

Climeon has received an order for a geothermal Heat Power project in Hungary, a new geographical market for the company.

– The potential for geothermal heat power in Central and Eastern Europe is large, and in the past months we have been investigating the potential of several countries in the area. I am happy to announce that we have now won our first order in Hungary, a country with a long tradition of utilizing geothermal water for spas, says Thomas Öström, CEO of Climeon.

Baseload Capital Hungary has placed an order of Heat Power modules with an order value of SEK 9 million, excluding service fees and software licenses. Mannvit, a well-known engineering company within the geothermal industry, and Cam Consulting will participate in the licensing process and the construction of the power plant. The Heat Power modules are to be delivered in 2019 and willproduce clean electricity from an already existing geothermal well in Szentes, in the south-eastern part of Hungary.

-Hungary has a huge geothermal potential. Until recently, profitable electricity production from this resource was only feasible in a few locations. Now with Climeon’s technology, it seems that there is a way to spread this type of electricity production to more parts of the country, and we are welcoming them in exploiting the power production possibilities of our existing wells in Szentes. This is something I have wanted to do, since I took office as mayor 27 years ago, says Imre Szirbik, Mayor of Szentes.

– This pilot project in Hungary will act as a steppingstone for the whole region for Baseload capital. We see this as a strategic move to enter and build up a portfolio of Heat Power plants providing the region with a renewable baseload. Alexander Helling CEO Baseload Capital

– This order is a strategically important step for further Heat Power projects in Central and Eastern Europe and will contribute to creating a greener Europe, says Thomas Öström, CEO of Climeon.

This press release contains such information that Climeon AB (publ) is required to publish in accordance with the EU Market Abuse Regulation. The information was published for public disclosure on May 15th, 2019 at 15:50 CET throughthe agency of the contact persons set out above. 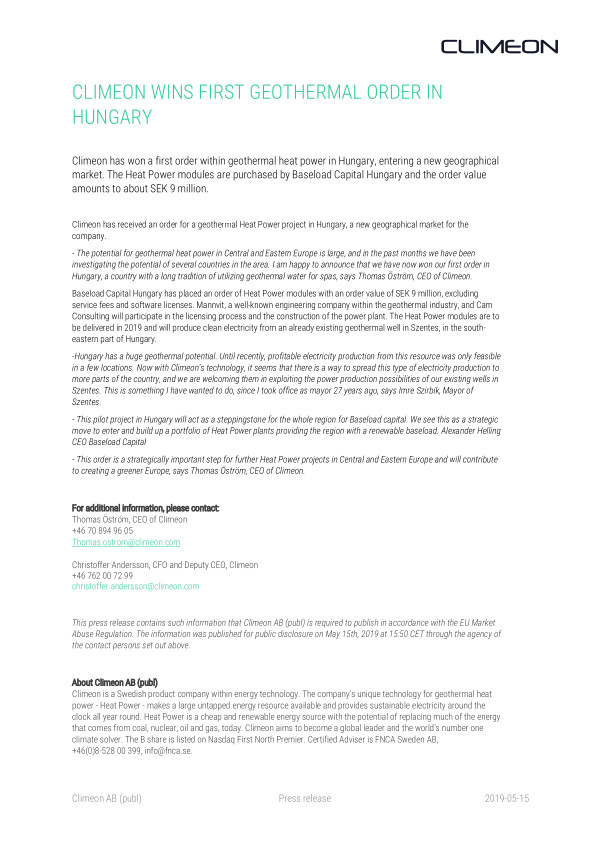 Climeon wins first geothermal order in Hungary
SHARE THIS ARTICLE
Manage Cookie Consent
To provide the best experiences, we use technologies like cookies to store and/or access device information. Consenting to these technologies will allow us to process data such as browsing behavior or unique IDs on this site. Not consenting or withdrawing consent, may adversely affect certain features and functions.
Manage options Manage services Manage vendors Read more about these purposes
View preferences
{title} {title} {title}