Climeon has entered a new phase with increased focus on scale-up and building of a global organization. Against this background, some management changes are made to increase operational focus and optimize the preconditions for the global expansion ahead of the company.

Olle Tholander is appointed Head of Sales and Marketing, after having worked as a consultant in Climeon for some time. Olle Tholander has extensive experience of sales and business development, most recently as Managing Partner of H&Z Nordic Management Consulting and before that leading positions within Ericsson, including CEO of Ericsson Ukraine.

– It is very pleasing that Olle Tholander becomes part of Climeon's management team. Olle has already contributed a great deal within both sales and business development in the company and we look forward to further developing the market-driven sales organization that we have built up, says Thomas Öström, CEO of Climeon.

Andreas Grenninger is appointed Head of Organizational Development and Globalization, reporting to CFO, and will be driving strategic change through the management team. Andreas Grenninger was previously Head of Service and Delivery at Climeon.

– We have an incredibly good team at Climeon and during the past two years the company has grown and changed a lot. As we have entered a new phase with focus on global expansion we are making some changes in the organization to be maximally equipped and have the best conditions for a rapid global scaling, Thomas Öström, CEO of Climeon, concludes.

– With an order backlog of SEK 816 million to be delivered and the building of sales and local organizations in several countries, we need an operational focus in both the management team and the organization. With this team we can best address the challenges we face and increase the possibility of reaching our vision – becoming the number one climate solver, continues Thomas Öström. 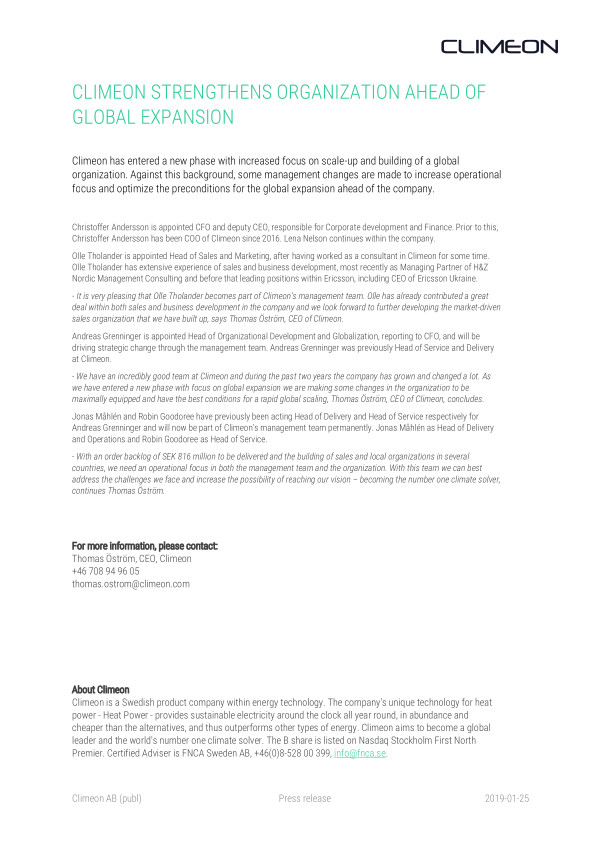 Climeon strengthens organization ahead of global expansion
SHARE THIS ARTICLE
Manage Cookie Consent
To provide the best experiences, we use technologies like cookies to store and/or access device information. Consenting to these technologies will allow us to process data such as browsing behavior or unique IDs on this site. Not consenting or withdrawing consent, may adversely affect certain features and functions.
Manage options Manage services Manage vendors Read more about these purposes
View preferences
{title} {title} {title}