Climeon Reduces the Order Backlog in Iceland by 131.6 Million SEK

Climeon's customer, Varmaorka, has informed Climeon that they have chosen to wind down business operations, therefore Climeon has reduced their order backlog in Iceland by 131.6 million SEK.

Climeon's customer within the geothermal energy market in Iceland, Varmaorka, has a prior commitment with Climeon to call off a number of Climeon HP150s, Climeon’s previous product generation, by the 31st of December, 2023. Varmaorka has now informed Climeon that they intend to wind down their operations, and therefore will not fulfill their commitment. Climeon has chosen to write down the value of its order backlog by 131.6 million SEK.

As previously communicated, Climeon is in a new phase with the finalization and commercialization of the next generation of our Heat Power technology, HeatPower 300, initially for the maritime, engine-based power stations and industrial waste heat recovery markets. This strategy remains firm and work is in progress, says Lena Sundquist, CEO of Climeon.

About Climeon AB (publ)
Climeon is a Swedish product company within energy technology. The company's unique technology for thermal power – Heat Power – makes accessible a largely unused energy source and provides sustainable electricity from hot water, around the clock, all year round. Heat Power is a cheap and renewable energy source with the potential to replace much of the energy that today comes from coal, nuclear power, oil and gas. The B share is listed on the Nasdaq First North Premier Growth Market. FNCA Sweden AB is the Certified Adviser.

This information is information that Climeon is obliged to make public pursuant to the EU Market Abuse Regulation. The information was submitted for publication, through the agency of the contact persons set out above, at 2022-11-23 07:30 CET. 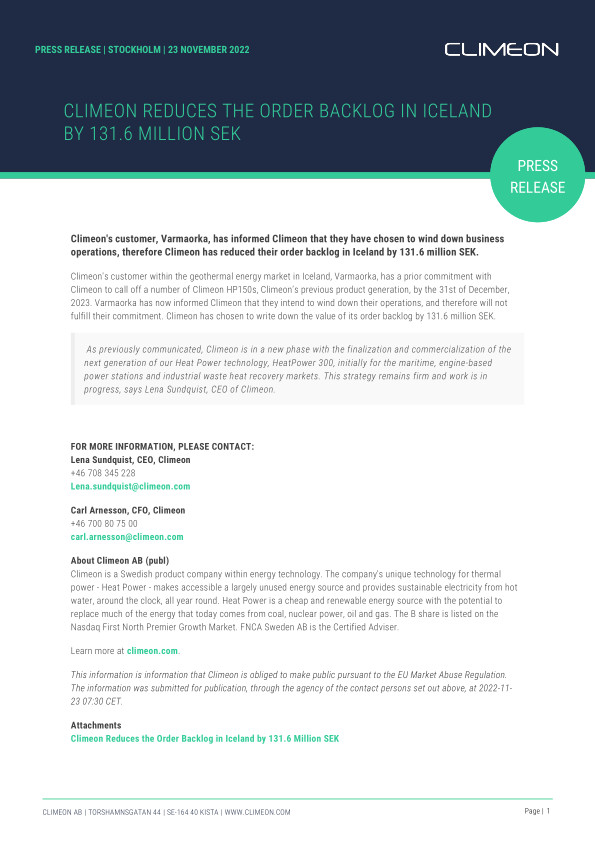 Climeon Reduces the Order Backlog in Iceland by 131.6 Million SEK
SHARE THIS ARTICLE