Climeon has been granted approximately SEK 12 million from the Swedish Energy Agency for a project to use waste heat in the steel industry more efficiently. The project is being implemented in collaboration with SSAB and gives Climeon the opportunity to extend its concept of electricity generation from waste heat to also include steam.

Climeon has worked with Swedish Steel producer SSAB in Borlänge since 2015 when SSAB became the first industrial customer to install Climeon's Heat Power system. Throughout the cooperation, Climeon and SSAB have discussed the possibility of further increasing energy recovery in the steel production.

– Through this project, we will be able to double the energy recovery. Increasing energy recovery in the industrial sector is something both Climeon, SSAB and the Swedish Energy Agency prioritizes highly, says Thomas Öström, CEO of Climeon.

– We are very pleased to be able to carry out this project together and show the power of cooperation between business and government regarding the climate issue, Thomas Öström continues.

– With this grant, we want to contribute to more efficient use of waste heat at SSAB, while at the same time enable Climeon's technology to reach a wider market and in the long term contribute to increased energy efficiency in the industry, says Klara Helstad, at the Swedish Energy Agency.

In the steel industry there is waste heat in the form of flue gases, steam and hot water. By combining Climeon's new steam turbine solution with the company's Heat Power module, you can utilize the excess heat more efficiently and produce more electricity. In the same way that Viking Line is the first to evaluate Climeon's combination of a steam turbine solution and a Heat Power module for marine applications, SSAB is now first in the industrial segment.

– It feels extra exciting to develop our hybrid solution for the industrial segment together with SSAB, as they are in the forefront when it comes to the transition to a greener steel production, says Dr Rakshith Sachitanand, Product Manager at Climeon.

– With this project we can demonstrate the potential for a hybrid solution not only in steel production but also in other industrial processes as well as in areas such as power generation from combustion engines, so-called Gensets, continues Rakshith Sachitanand. 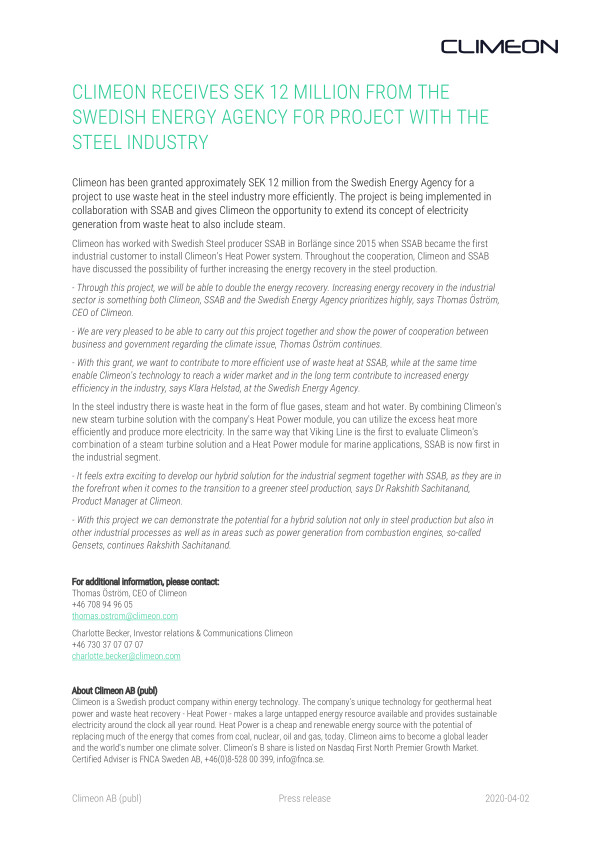 Climeon receives SEK 12 million from the Swedish Energy Agency for project with the steel industry
SHARE THIS ARTICLE
Manage Cookie Consent
To provide the best experiences, we use technologies like cookies to store and/or access device information. Consenting to these technologies will allow us to process data such as browsing behavior or unique IDs on this site. Not consenting or withdrawing consent, may adversely affect certain features and functions.
Manage options Manage services Manage vendors Read more about these purposes
View preferences
{title} {title} {title}