Climeon has commissioned another power plant in Japan. The geothermal power plant in Okuhida Onsengo Kansaka is the company’s second installation in Japan, and the first one in connection to an existing onsen, a traditional Japanese bath.

In late April, Climeon commissioned its first geothermal installation in Japan. The first installation was a bottoming cycle where the Heat Power module recovers the waste heat from an existing high temperature geothermal power plant. Now Climeon has commissioned the company’s second installation, which is located by a traditional Japanese spa.

– It is a fantastic feeling to be able to put the second power plant into operation so close to the commissioning of the first power plant in Japan. Despite the prevailing global situation, the teams at Climeon and Baseload have continued to work hard and therefore also managed to complete not just one, but two installations in a short time, says Thomas Öström, CEO of Climeon.

Climeon and Baseload Power Japan's second installation is located in Okuhida Onsengo Kansaka, where the companies have built a geothermal power plant in connection to a traditional Japanese hot spring, onsen.

– This power plant is very symbolic to us, as it shows that our fantastic tradition of onsen can be combined with a green energy transition where geothermal heat power plays a key role, says Jack (Masao) Watanabe, President of Climeon Japan K.K.

Japan is a highly prioritized geographical market for Climeon, due to the country’s favorable conditions for geothermal electricity production. According to the International Renewable Energy Agency (IRENA), more than half of Japan’s geothermal resources are located around national parks or near the country’s 27,000 thermal springs. For centuries, communal baths and hot springs, onsen, have been an important part of the Japanese culture. However, many landowners in rural Japan have struggled to find a commercial use for their land as the spa business has been in decline for several years. Through Climeon’s small and discrete power systems, these spa owners now have the possibility to add a new income stream, without harming the spa or the nature, while at the same time contributing to the country’s green energy transition. 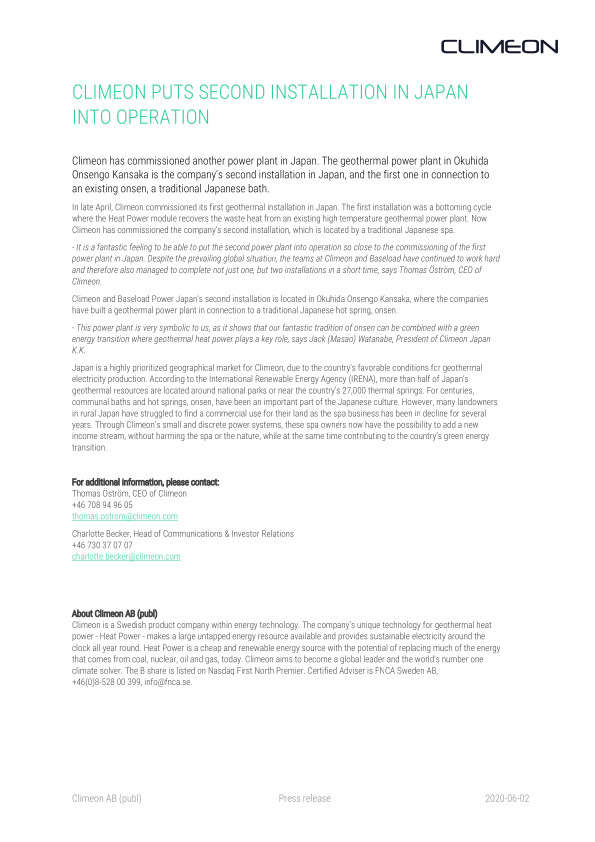 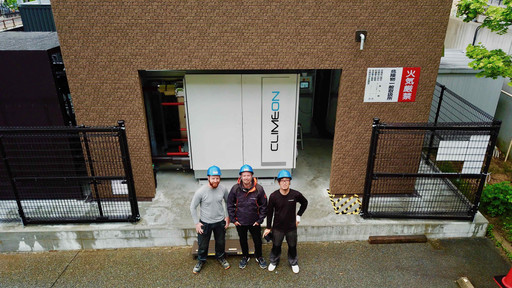 Okuhida Onsengo Kansaka
SHARE THIS ARTICLE
Manage Cookie Consent
To provide the best experiences, we use technologies like cookies to store and/or access device information. Consenting to these technologies will allow us to process data such as browsing behavior or unique IDs on this site. Not consenting or withdrawing consent, may adversely affect certain features and functions.
Manage options Manage services Manage vendors Read more about these purposes
View preferences
{title} {title} {title}