Climeon has signed an agreement with Icelandic Varmaorka to expand the existing order to a value of about 65 MEUR, from just over 30 MEUR.

In August 2017, Climeon won an order on geothermal power plants from the Icelandic energy operator Varmaroka with a value of just over 30 MEUR. Now Varmaorka increases their order of 100 Heat Power modules to 197 modules with a total value of about
65 MEUR, excluding service costs and software licenses.

-The potential of geothermal energy on Iceland with Climeon's technology is greater than we thought a year ago. During the year we have secured several new sites, and we therefore want to increase the speed of our rollout and secure delivery of modules to us, says Ingvar Gardarsson, Chairman of the Board of Varmaorka.

The expansion of the order is made using a financing solution from Baseload Capital. An important prerequisite for financing has been that the Heat Power modules are standardized and provide predictable revenue flows.

–Climeon's goal is to become the world’s number one climate solver by selling, producing and delivering Heat Power modules. The deal in Iceland shows that through small-scale distributed geothermal energy we can create large-scale electricity production for communities and countries, says Thomas Öström, CEO of Climeon.

Varmaorka’s order increases to 197 Heat Power modules from the previous 100. The modules will be placed in about 20 locations and will be delivered in groups of 2-15 units over a period of 36 months through June 2021. The first delivery consisted of four modules and was delivered to Flúdir on southern Iceland earlier in June this year. The production of three additional modules for the next site has begun during the summer for delivery in the fall.

Iceland has among the lowest electricity prices in the world, but locally produced electricity can be a key enabler for local communities to grow around the country. Climeon's plants produce electricity from hot water locally and at a competitive price around the clock, all year round.

This press release contains such information that Climeon AB (publ) is required to publish in accordance with the EU Market Abuse Regulation. The information was published for public disclosure on June 26th 2018 at 08:30 CET through the agency of the contact persons set out above.

About Climeon
Climeon is a Swedish product company within energy technology. The company's unique technology for thermal power – "Heat Power" – provides sustainable electricity around the clock all year round, in abundance and cheaper than the alternatives, and thus outperforms other types of energy. Climeon aims to become a global leader and the world's number one climate solver. The B share is listed on Nasdaq Stockholm First North Premier. Certified Adviser is FNCA Sweden AB. 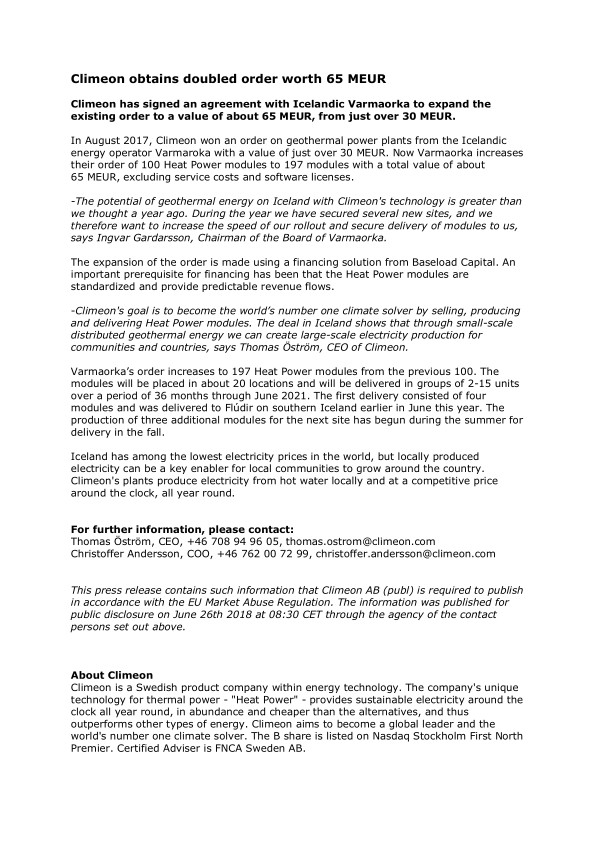 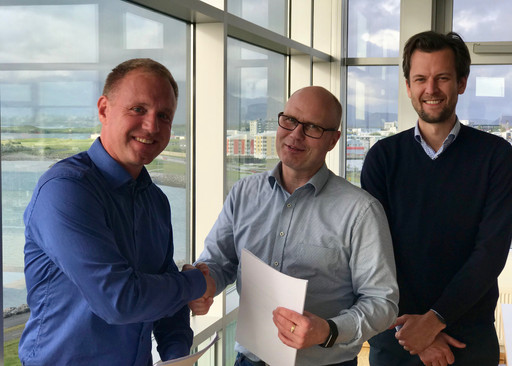 Climeon and Varmaorka June 2018
SHARE THIS ARTICLE
Manage Cookie Consent
To provide the best experiences, we use technologies like cookies to store and/or access device information. Consenting to these technologies will allow us to process data such as browsing behavior or unique IDs on this site. Not consenting or withdrawing consent, may adversely affect certain features and functions.
Manage options Manage services Manage vendors Read more about these purposes
View preferences
{title} {title} {title}