Climeon is allocated approximately SEK 15.3 million through redemption of warrants

Climeon has several warrant programs for selected senior executives and other key employees and consultants. All outstanding warrants in the programs with a subscription period ending December 31, 2018 have now been exercised and the company will be allocated about SEK 15.3 million, excluding issue costs.

The remaining warrants within these programs, corresponding to 681,100 series B-shares, have now been exercised for subscription. The issue prices of the warrant programs are in the range of SEK 4.50-26.50 per share. In conjunction with the exercise of warrants, Climeon will be allocated about SEK 15.3 million, excluding issue costs.

– I’m happy to see that many of our employees have participated in the warrant programs and thereby increased their shareholdings in Climeon and gained from the value growth the company has had during the programs’ duration, says Thomas Öström, CEO of Climeon.

By exercising their warrants three members of Climeon’s management and board, Christoffer Andersson, Olle Bergström and Christopher Engman, have acquired shares for SEK 10.5 million. To finance the exercise of warrants, they have sold parts of their shareholdings in Climeon.

Climeon has established several warrant programs, based on warrants that are taxed as capital income, for selected senior executives and other key employees and consultants who are considered to have a material impact on the company’s operations and development. 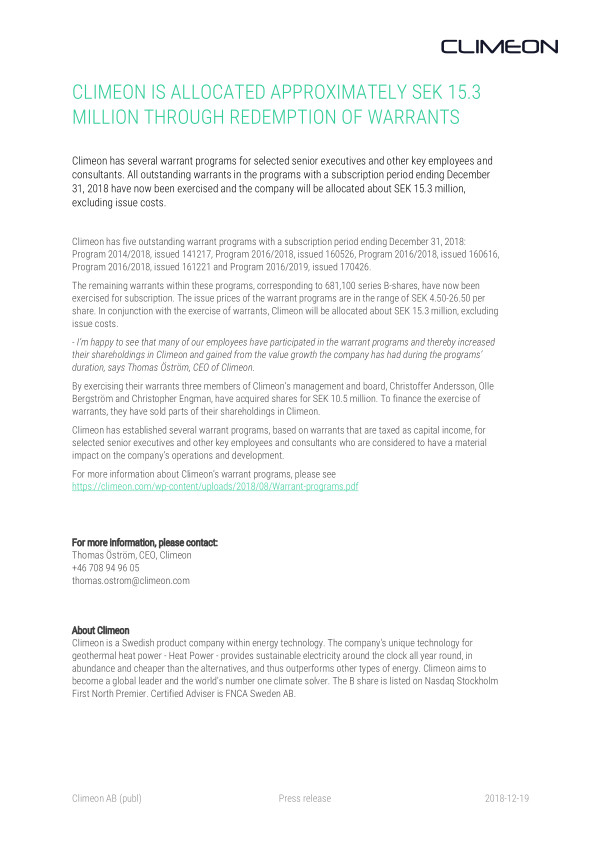 Climeon is allocated approximately SEK 15.3 million through redemption of warrants
SHARE THIS ARTICLE
Manage Cookie Consent
To provide the best experiences, we use technologies like cookies to store and/or access device information. Consenting to these technologies will allow us to process data such as browsing behavior or unique IDs on this site. Not consenting or withdrawing consent, may adversely affect certain features and functions.
Manage options Manage services Manage vendors Read more about these purposes
View preferences
{title} {title} {title}