Climeon has initiated the recruitment of a new CFO to be a part of leading the company in its next phase. Carl Frykfeldt, Head of Financial Operations at Climeon, has been appointed acting CFO.

Climeon has grown rapidly in recent years, and at the same time expanded geographically. In light of this, Climeon has initiated a recruitment process to find a new CFO who will join and lead the company in its next phase; as a Group with operations in several countries. Carl Frykfeldt, Head of Financial Operations, has been appointed acting CFO until a new CFO takes office.

– Since we listed Climeon in October 2017, the company has grown significantly from 40 to 100 employees, revenue has gained momentum and a global expansion has begun, says Thomas Öström, CEO of Climeon.

– This is why we now want to recruit a CFO with broad experience working in a listed environment and operationally managing the financial tasks of an international Group, continues Thomas Öström.

The company's current CFO Christoffer Andersson has held several leading roles within Climeon since 2016 and has been significant in the company's strong development and IPO.

– We want to thank Christoffer Andersson for his many crucial contributions over the years. Christoffer has played an important role in building the company and had a major role in the work of taking Climeon to First North Premier, concludes Thomas Öström. 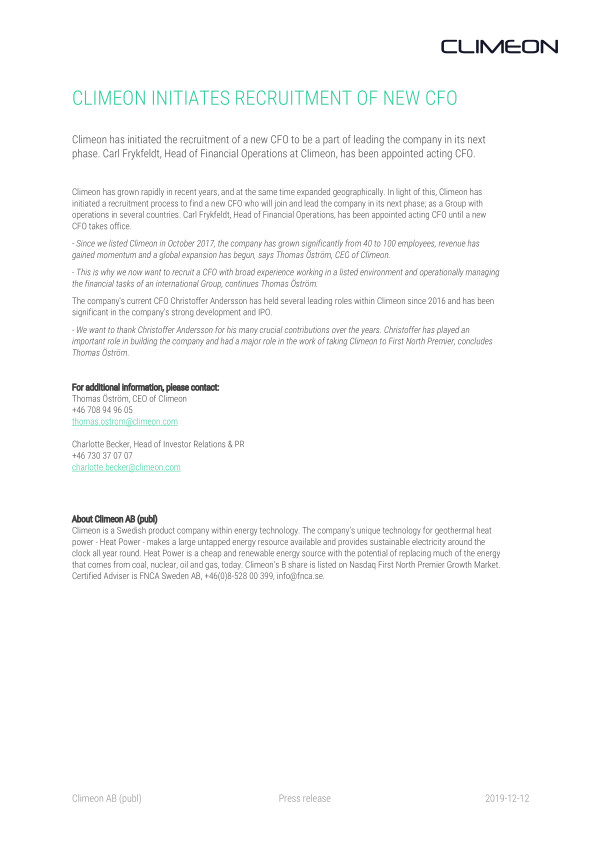 Climeon initiates recruitment of new CFO
SHARE THIS ARTICLE
Manage Cookie Consent
To provide the best experiences, we use technologies like cookies to store and/or access device information. Consenting to these technologies will allow us to process data such as browsing behavior or unique IDs on this site. Not consenting or withdrawing consent, may adversely affect certain features and functions.
Manage options Manage services Manage vendors Read more about these purposes
View preferences
{title} {title} {title}