Climeon has initiated the recruitment of a new CEO to lead the company in its next phase. The current CEO and founder of Climeon, Thomas Öström, will remain as CEO until the recruitment has been completed and will thereafter focus on business development.

Climeon has, since it was founded by Thomas Öström and Joachim Karthäuser in 2011, grown and developed, as well as expanded geographically. Thomas Öström has been the CEO of Climeon since 2011 and will remain in his position until the recruitment of a new CEO has been completed. Thomas will thereafter focus on business development and will continue as a board member and the company's largest shareholder.

– I am incredibly proud of what we have achieved and at the same time feel that it is time to hand over the role of CEO to someone else who can have a clear operational focus and leadership. I want to be able to put more effort into Climeon's business development and building long-term partnerships, says Thomas Öström.

– Thomas has played a crucial role in Climeon's positive development so far and the board would like to accommodate his wish to be able to spend more time on business development by recruiting a new CEO, says Per Olofsson, Chairman of the Board of Climeon.

– The conditions for companies operating in renewable energy are very favorable and there is a great market potential for Climeon to realize. Therefore, we must now find the right person who can take the company to the next level, says Per Olofsson.

This press release contains such information that Climeon AB (publ) is required to publish in accordance with the EU Market Abuse Regulation. The information was published for public disclosure on November 11, 2020 at 10:00 CET through the agency of the contact persons set out above. 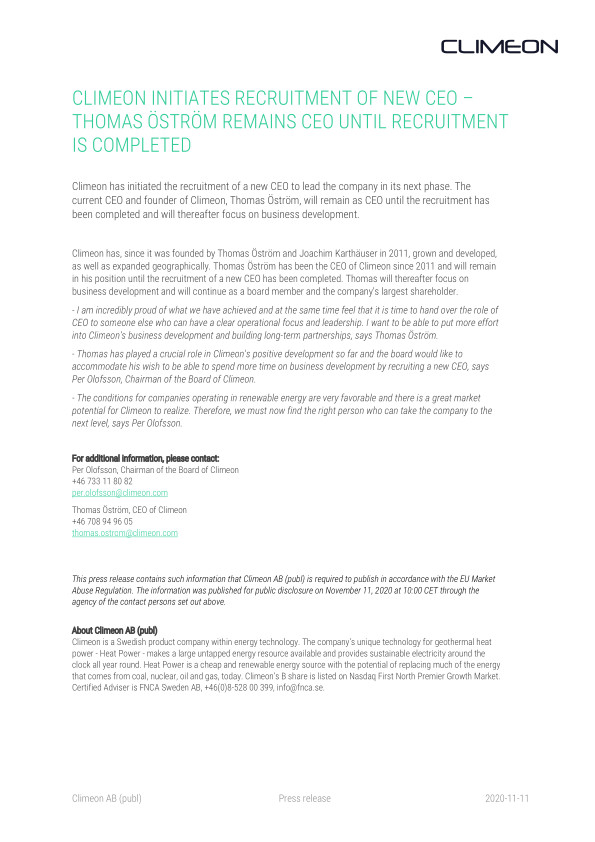 Climeon initiates recruitment of new CEO – Thomas Öström remains CEO until recruitment is completed
SHARE THIS ARTICLE
Manage Cookie Consent
To provide the best experiences, we use technologies like cookies to store and/or access device information. Consenting to these technologies will allow us to process data such as browsing behavior or unique IDs on this site. Not consenting or withdrawing consent, may adversely affect certain features and functions.
Manage options Manage services Manage vendors Read more about these purposes
View preferences
{title} {title} {title}