In 2015, Viking Line became the first company in the world to install a Climeon Heat Power module to utilize the waste heat from the ship’s engines. When Viking Line began designing the new ship, Viking Glory, they were sure of their plans to once again install a Climeon Heat Power module. At the same time, they wanted to find more ways to save additional energy and reduce carbon dioxide emissions.

– It feels like a great privilege to get to work so closely with Viking Line, comments Thomas Öström, CEO of Climeon. They are pioneers in the maritime industry when it comes to carbon savings and their feedback has been very valuable, continues Thomas Öström.

Climeon therefore developed a solution to further increase the energy recovery on board Viking Glory. The solution is at an early stage and will now be evaluated by Viking Line and Climeon. It combines a proprietary steam turbine with Climeon's Heat Power module to optimally utilize waste heat at both high and low temperatures. The steam turbines, like Climeon's Heat Power modules, are scalable and easy to adjust based on runtime and heat supply.

– Our customers' feedback enables us to improve, and in this case, we have, as a potential part of Climeon's future offering, developed a steam turbine that will now be tested, concludes Thomas Öström.

– Since 2015, when we first installed Climeon's module, we have had a close cooperation between the companies, says Kari Granberg, project manager for Viking Glory at Viking Line. We are very proud to now be the first ones to test steam turbines in combination with Heat Power modules, continues Kari Granberg.

– Through our close collaboration with Climeon, we continue to find ways to recycle as much waste heat as possible and make our vessels even more climate friendly, Kari Granberg concludes.

The steam turbines have been specially developed for Viking Line and the technology will now be evaluated, refined and further developed in close collaboration with Viking Line. The two steam turbines use temperatures around 180 degrees Celsius and can generate a maximum of 150 kW each. The energy remaining in the steam coming out from the steam turbines is then used to generate electricity using Climeon's Heat Power modules, which maximizes the electrical output and recovery of the ship's waste heat.

The total maximum capacity for Climeon's systems on board the Viking Glory is 900 kW. 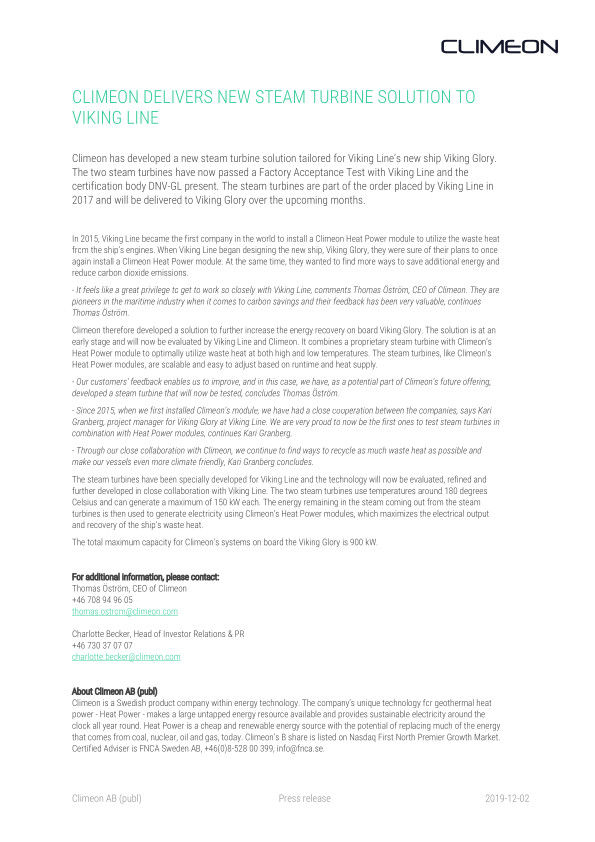 Climeon delivers new steam turbine solution to Viking Line
SHARE THIS ARTICLE
Manage Cookie Consent
To provide the best experiences, we use technologies like cookies to store and/or access device information. Consenting to these technologies will allow us to process data such as browsing behavior or unique IDs on this site. Not consenting or withdrawing consent, may adversely affect certain features and functions.
Manage options Manage services Manage vendors Read more about these purposes
View preferences
{title} {title} {title}