NOT FOR RELEASE, PUBLICATION OR DISTRIBUTION IN WHOLE OR IN PART, DIRECTLY OR INDIRECTLY, IN THE UNITED STATES, AUSTRALIA, CANADA, NEW ZEALAND, HONG KONG, JAPAN, SINGAPORE, SOUTH AFRICA, SOUTH KOREA OR ANY OTHER JURISDICTION WHERE SUCH RELEASE, PUBLICATION OR DISTRIBUTION WOULD BE UNLAWFUL OR WOULD REQUIRE REGISTRATION OR ANY OTHER MEASURES. PLEASE REFER TO IMPORTANT INFORMATION AT THE END OF THE PRESS RELEASE.

The board of directors of Climeon AB (publ) (”Climeon” or the ”Company”) has, as communicated in the Company’s press release earlier today, resolved to carry out a directed new share issue of 3,000,000 Class B shares at a subscription price of SEK 83 per share. The share issue was substantially over-subscribed with large interest from institutional investors in the Nordics, Germany, UK and USA. Through the directed new share issue, Climeon will receive proceeds amounting to SEK 249 million.

The board of directors of Climeon has, based on the authorization given by the annual general meeting on 19 April 2018, and as communicated in the Company’s press release earlier today, resolved to carry out a directed new share issue of 3,000,000 Class B shares to institutional investors (the “Directed New Share Issue”). The Directed New Share Issue was, among others, subscribed for by Handelsbanken, Skandia, Länsförsäkringar, Enter Fonder and institutional investors in the Nordics, Germany, UK and USA. The transaction was carried out through an accelerated book building procedure by the Company’s financial advisor Pareto Securities AB (“Pareto Securities”).

The reason for the deviation from the shareholders’ preferential rights are mainly to broaden the shareholder base among Swedish and international institutional investors and at the same time raise capital in a time and cost efficient manner. The Directed New Share Issue is carried out to accelerate the Company’s business plan through market establishment in chosen focus markets, accelerated product development to gain further cost savings, accelerating the path towards the long-term target of 50 percent gross margin and lowering the costs of surrounding customer systems at each site. In addition, the Directed New Share Issue will be used as a risk mitigation buffer and to strengthen the Company’s balance sheet to support the larger sales volumes. The board of directors’ assessment is that the subscription price in the Directed New Share Issue is in accordance with market conditions, since it was determined through an accelerated book building procedure.

In order to facilitate the delivery of shares to the investors in connection with the Directed New Share Issue, as expected for 8 April 2019, seven of the Company’s major shareholders, have jointly lent 3,000,000 shares to Pareto Securities. The shares will be returned after the Directed New Share Issue has been registered with the Swedish Companies Registration Office, which is expected to occur on or about 10 April 2019.

About Climeon AB (publ)
Climeon is a Swedish product company within energy technology. The company's unique technology for geothermal heat power – Heat Power – provides sustainable electricity around the clock all year round, in abundance and cheaper than the alternatives, and thus outperforms other types of energy. Climeon aims to become a global leader and the world's number one climate solver. The B share is listed on Nasdaq First North Premier. Certified Adviser is FNCA Sweden AB, +46(0)8-528 00 399, info@fnca.se.

This information is such that Climeon AB (publ) is obliged to disclose pursuant to the EU Market Abuse Regulation. The information was released for public disclosure, through the agency of the contact persons above, at the time set out above.

This press release is not a prospectus for the purposes of Prospectus Directive and has not been approved by any regulatory authority in any jurisdiction. Climeon has not authorized any offer to the public of shares or rights in any member state of the EEA and no prospectus has been or will be prepared in connection with the Directed New Share Issue. In any EEA Member State, this communication is only addressed to and is only directed at qualified investors in that Member State within the meaning of the Prospectus Directive.

This announcement does not identify or suggest, or purport to identify or suggest, the risks (direct or indirect) that may be associated with an investment in the new shares. Any investment decision in connection with the Directed New Share Issue must be made on the basis of all publicly available information relating to the Company and the Company’s shares. Such information has not been independently verified by the Managers. The Managers are acting for the Company in connection with the transaction and no one else and will not be responsible to anyone other than the Company for providing the protections afforded to its clients nor for giving advice in relation to the transaction or any other matter referred to herein.

The information in this press release may not be forwarded or distributed to any other person and may not be reproduced at all. Any forwarding, distribution, reproduction or disclosure of this information in its entirety or in any part is prohibited. Failure to follow these instructions may result in a breach of the Securities Act or applicable laws in other jurisdictions.

This press release does not constitute an invitation to warrant, subscribe, or otherwise acquire or transfer any securities in any jurisdiction. This press release does not constitute a recommendation for any investors' decisions regarding the Directed New Share Issue. Each investor or potential investor should conduct a self-examination, analysis and evaluation of the business and information described in this press release and any publicly available information. The price and value of the securities can decrease as well as increase. Achieved results do not provide guidance for future results. Neither the contents of the Company's website nor any other website accessible through hyperlinks on the Company's website are incorporated into or form part of this press release.

Information to distributors
Solely for the purposes of the product governance requirements contained within: (a) EU Directive 2014/65/EU on markets in financial instruments, as amended (“MiFID II”); (b) Articles 9 and 10 of Commission Delegated Directive (EU) 2017/593 supplementing MiFID II; and (c) local implementing measures (together, the “MiFID II Product Governance Requirements”), and disclaiming all and any liability, whether arising in tort, contract or otherwise, which any “manufacturer” (for the purposes of the MiFID II Product Governance Requirements) may otherwise have with respect thereto, the shares in Climeon have been subject to a product approval process, which has determined that such shares are: (i) compatible with an end target market of retail investors and investors who meet the criteria of professional clients and eligible counterparties, each as defined in MiFID II; and (ii) eligible for distribution through all distribution channels as are permitted by MiFID II (the “Target Market Assessment”). Notwithstanding the Target Market Assessment, Distributors should note that: the price of the shares in Climeon may decline and investors could lose all or part of their investment; the shares in Climeon offer no guaranteed income and no capital protection; and an investment in the shares in Climeon is compatible only with investors who do not need a guaranteed income or capital protection, who (either alone or in conjunction with an appropriate financial or other adviser) are capable of evaluating the merits and risks of such an investment and who have sufficient resources to be able to bear any losses that may result therefrom. The Target Market Assessment is without prejudice to the requirements of any contractual, legal or regulatory selling restrictions in relation to the Directed New Share Issue.

For the avoidance of doubt, the Target Market Assessment does not constitute: (a) an assessment of suitability or appropriateness for the purposes of MiFID II; or (b) a recommendation to any investor or group of investors to invest in, or purchase, or take any other action whatsoever with respect to the shares in Climeon.

Each distributor is responsible for undertaking its own target market assessment in respect of the shares in Climeon and determining appropriate distribution channels. 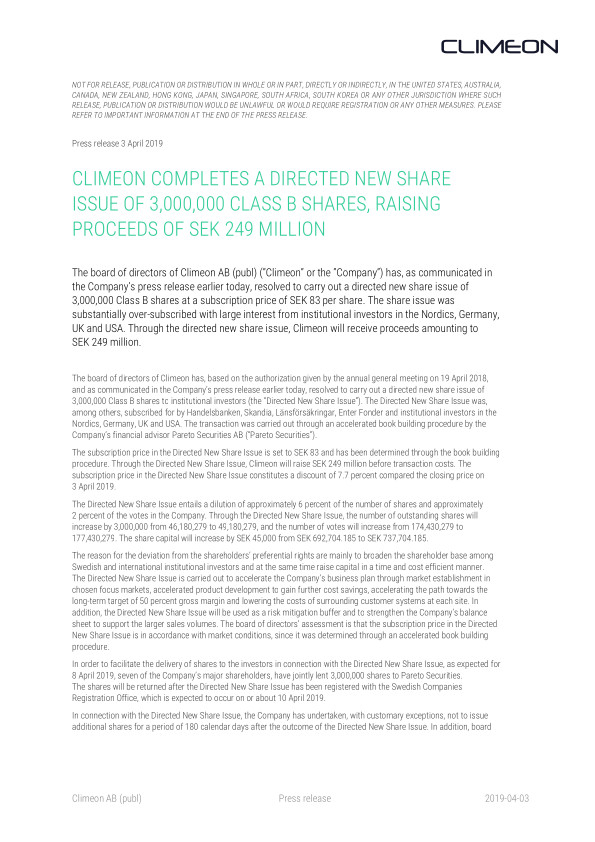 Climeon completes a directed new share issue of 3,000,000 class B shares, raising proceeds of SEK 249 million
SHARE THIS ARTICLE
Manage Cookie Consent
To provide the best experiences, we use technologies like cookies to store and/or access device information. Consenting to these technologies will allow us to process data such as browsing behavior or unique IDs on this site. Not consenting or withdrawing consent, may adversely affect certain features and functions.
Manage options Manage services Manage vendors Read more about these purposes
View preferences
{title} {title} {title}