Climeon and Tomoe Engineering to enter cooperation in Japan

Climeon and Tomoe Engineering have signed a Memorandum of Understanding with the intention of exploring and establishing a commercial model for the two companies’ cooperation in Japan, allowing Tomoe Engineering to sell Climeon’s technology to industrial customers.

In October 2020 Japan’s Prime Minister Suga Yoshihide Suga announced that Japan vows to become carbon neutral and have zero emissions of greenhouse gases as of 2050. Japan is the world’s fifth largest carbon dioxide emitter, which is why this policy change is expected to have a major impact on Japanese industry. It is in the light of this change that Tomoe Engineering and Climeon has found a common ground and opportunity to expand their businesses within the renewable energy sector, specifically within waste heat recovery.

– We are pleased to enter a collaboration with Tomoe Engineering, a 1st tier on the Tokyo stock exchange, and look forward to expanding Climeon’s business in Japan to industrial applications, says Jack Watanabe, Representative Director of Climeon Japan.

Tomoe Engineering and Climeon have agreed to establish a cooperation in Japan, where Tomoe will market and sell Climeon’s Heat Power technology. The first joint event will be at the Biomass Expo in Tokyo Big Sight on March 3-5th where a model of a Climeon’s solution will displayed in Tomoe’s booth. Due to the pandemic the event can also be visited online.

– Climeon's technology is outstanding in terms of efficiency and we would like to propose Climeon systems to our customers and partners and thereby help them with their energy transition, says the General Manager of New Business Development Dept at Tomoe Engineering.

Tomoe Engineering is a cutting-edge technology and product company that manufactures and sells chemical materials and chemical machinery, ranging from centrifuges to sewage treatment equipment. 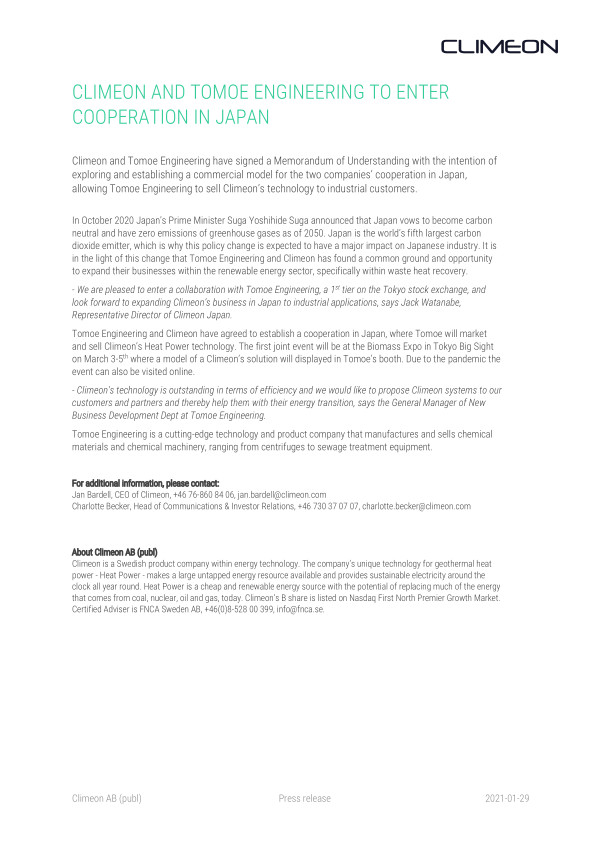 Climeon and Tomoe Engineering to enter cooperation in Japan
SHARE THIS ARTICLE
Manage Cookie Consent
To provide the best experiences, we use technologies like cookies to store and/or access device information. Consenting to these technologies will allow us to process data such as browsing behavior or unique IDs on this site. Not consenting or withdrawing consent, may adversely affect certain features and functions.
Manage options Manage services Manage vendors Read more about these purposes
View preferences
{title} {title} {title}