Climeon and Landsvirkjun initiate a cooperation

Climeon and Landsvirkjun, the national power company of Iceland, have signed a Letter of Intent, initiating a cooperation. The purpose of the cooperation is to evaluate a solution combining mineral extraction with Climeon’s technology for electricity production.

Climeon and Landsvirkjun have, in a Letter of Intent, agreed to co-operate in investigating and evaluating extracting minerals such as silica from geothermal brine using Geo40’s technology. This would make producing electricity from the high enthalpy fluid more feasible using technology such as Climeon’s. A solution combining these two technologies can be added to large scale geothermal power plants like the ones Landsvirkjun operate in Iceland.

Landsvirkjun is the largest energy company in Iceland and is owned by the Icelandic state. The company operates an installed capacity of 2.1 GW in hydro and geothermal power plants, making them one of Europe’s largest producers of renewable energy.

– Landsvirkjun is one of the most well-renowned companies in the geothermal industry and we are very proud to be cooperating with them, says Thomas Öström, CEO of Climeon.

– With this cooperation, we want to show that combining high and low temperature geothermal power production with mineral extraction is technically and commercially viable, continues Thomas Öström.

– The possibility of silica extraction is a ground breaking proposal and will pave the path for additional power production, says Bjarni Pálsson, Executive Director of Geothermal and Wind at Landsvirkjun.

– Geothermal electricity is truly green. However, companies such as Climeon show that there is always room for improvement. We are happy to have signed a Letter of Intent with Climeon to evaluate the opportunities going forward, continues Bjarni Pálsson.

More than half of the world’s geothermal power plants produce extra heat in Climeon’s temperature range that is currently not utilized for power production. To be able to fully utilize this waste heat, Climeon entered a partnership with the New Zealandic company Geo40 that has developed a technology for extracting minerals such as silica from the brine. By removing the silica from the brine, Climeon can utilize the waste heat from the high temperature geothermal power plants for power production, increasing the total power output.

About Climeon AB (publ)
Climeon is a Swedish product company within energy technology. The company’s unique technology for geothermal heat power – Heat Power – makes a large untapped energy resource available and provides sustainable electricity around the clock all year round. Heat Power is a cheap and renewable energy source with the potential of replacing much of the energy that comes from coal, nuclear, oil and gas, today. Climeon aims to become a global leader and the world's number one climate solver. The B share is listed on Nasdaq First North Premier. Certified Adviser is FNCA Sweden AB,  +46(0)8-528 00 399, info@fnca.se. 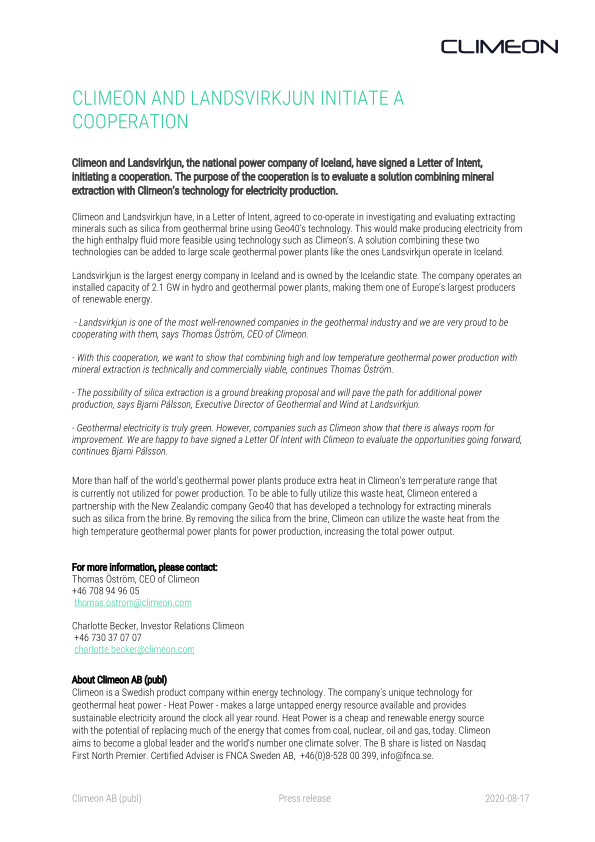 Climeon and Landsvirkjun initiate a cooperation
SHARE THIS ARTICLE
Manage Cookie Consent
To provide the best experiences, we use technologies like cookies to store and/or access device information. Consenting to these technologies will allow us to process data such as browsing behavior or unique IDs on this site. Not consenting or withdrawing consent, may adversely affect certain features and functions.
Manage options Manage services Manage vendors Read more about these purposes
View preferences
{title} {title} {title}