The German based Geoenergie Kirchweidach (GEK) and the Swedish clean tech company Climeon have today signed a non-binding LOI covering a supply of Climeon Heat Power modules to a geothermal power plant project in the Municipality of Kirchweidach. The potential order value is estimated to be about 5 MEUR.

The LOI is based on Climeon’s patented Heat Power technology with record high efficiency in low temperatures that will utilize the excess heat of the geothermal plant that today delivers heat to a 20 hectares green house and the city of Kirchweidach. The owners of GEK have previously had a discrepancy in how to best develop the geothermal power plant. Now, with the solution proposed by Climeon, all parties have an aligned view on how to develop the geothermal asset. The parties are currently negotiating financing solutions. If financing is secured and the parties have agreed upon a final purchase order for a Heat Power system, a contract will be signed.

This information is information that Climeon AB is obliged to make public pursuant to the EU Market Abuse Regulation.
The information was submitted for publication, through the agency of the contact person set out above, at 08.30 CET on November 29th, 2017

About Geoenergie Kirchweidach
Geoenergie Kirchweidach (GEK) in eastern part of Bavaria in Germany has had the ambition to build and run a geothermal power and heating plant in Kirchweidach and have a long-term plan to develop additional projects. The Kirchweidach Geothermal plant delivers heating to the community and its inhabitants. The district heating network is replacing the traditional heating that was done with fuel oil, LPG or pellets. Furthermore, a vegetable growing greenhouse of 20 hectares is heated all year round by the geothermal plant, saving at least 8,2 million kg of CO2 per year. GEK is the owner of the drilling site and the boreholes and will own and operate the Geothermal Power Plant that will deliver electricity into the public grid.

About Climeon
Climeon is a Swedish cleantech equipment vendor and world leader in converting low temperature heat into clean electricity. The company was founded in 2011 and is headquartered in Stockholm with customers in many parts of the World. Climeon was founded to deliver an economically viable business case when it comes to converting low temperature heat into electricity. Climeon was built with the ambition to deliver a good business case for utilizing waste heat with a positive environmental impact. Climeon is listed on Swedish Nasdaq First North Premier. 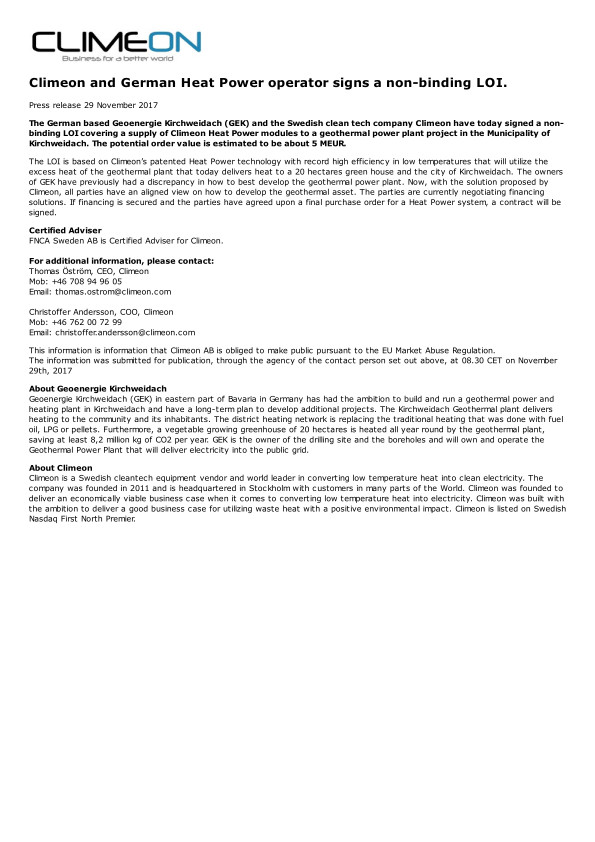