CAN WE TURN GLOBAL WARMING AROUND? … AND HOW?

Picture above: The potential scenario of the world with no ice left

Like it or not, our world is facing a number of huge, unprecedented threats:

1. Global warming is accelerating, due primarily to a severe imbalance between the increasing volumes of CO2 released into our atmosphere, and the amount that the plants on earth can consume through photosynthesis. When the two biggest countries in the world, China and India, start to consume energy at rates approaching those of Europe and North America, this already-critical situation will be officially out of control.

2. Global pollution. By 2000, the world’s chemical production had increased 400-fold since 1930. Chemicals have made much of modern life possible; some may be harmless, but others can cause damage and have also contaminated landscapes around the world. They can travel great distances by air or accumulate in the bodies of animals and humans who either absorb chemicals through the skin, or ingest them in food or water. Currently, there is increasing concern about three particular types of chemicals: those that persist in the environment and accumulate in the bodies of wildlife and people; endocrine disruptors that can interfere with hormones; and chemicals that cause cancer or damage DNA. For example, nuclear waste is a persistent chemical, for which, at the present time, the plans for safe long-term storage are neither technically nor economically convincing.

3. Pandemics and antibiotics resistance. In 1918, a strain of influenza spread worldwide and killed between 20 and 50 million people—more than were killed in all of World War I. With a rapidly increasing world population, alongside more and more resistant bacteria, a comparable pandemic could occur sometime soon. (NB: A Pandemic can also be engineered by humans.)

4. Nuclear war. With more unstable states like Pakistan and North Korea in possession of atomic weapons, the availability to terrorists seems a matter of not if, but when. Some large nations have populistic and possibly mentally unstable leaders. The United States and Russia have a combined arsenal of 14,700 nuclear weapons, and there is an estimated total of 15,700 nuclear weapons in existence worldwide.

5. Artificial Intelligence. We already entrust computers with running our stock markets, landing our planes, correcting our spelling, Googling our trivia, and calculating our restaurant tips. There are already in development robots that look like us, talk like us and recognize our facial movements. How long before they are us, as we download our thoughts and memories into our hard drives, the so-called “singularity”? How long before these machines are self-aware? Futurist and author Ray Kurzweil believes computers will be as smart as us by 2029, and by 2045 will be billions of times smarter than us. What then? We generally choose to see AI as an opportunity rather than a threat, but can we really afford to be so sure?

The "giant" among these threats is global warming

Among the five significant threats above, global warming has, according to many scientists, the highest risk of ending our presence on Earth. As we burn carbon and oil, more and more greenhouse gases are building up in the atmosphere. Many environmentalists believe we have already passed the point of no return. Once we exceed a certain threshold, Earth will continue warming even if we do manage to cut our CO2 emissions. What we do know is that, if we don’t begin reducing the amount of CO2 we are releasing into the air, and at least minimize the damage, a planet-wide disaster is assured.

Will humans want to drop their standard of living? We think not. We believe that if we wait for that to happen, it will be too late. Instead, we believe the rescue will come from three things:

– Consumers putting pressure on the big companies to really take the lead in being green;

On the technology side there are innovations in several major areas:

The potential of heat power

More than 50% of all energy in the world is lost as excess heat. Most of this excess heat is lost in the temperature range of 50-120 degrees Celsius, and comes from sources such as steel plants, aluminum plants, ship engines, power plants etc. It’s currently dumped into our oceans or poured out to the air through chimneys. Heat is also available from renewable sources, especially geothermal heat, allowing electricity production based on the heat found a few thousand meters down.

According to World Wildlife Fund (WWF), if as little as 10% of waste heat solely from industries and merchant vessels was recycled, it would save 21.6 million tons of CO2 emissions over a 10 year period. This is comparable to the amount of CO2 emissions Greece produces every year.

About the author: Christopher Engman is CRO/CMO at the cleantech company Climeon. He has a background in engineering and later moved on to building companies full time. Further, he regularly hosts lectures and interviews regarding mega deals and social selling. 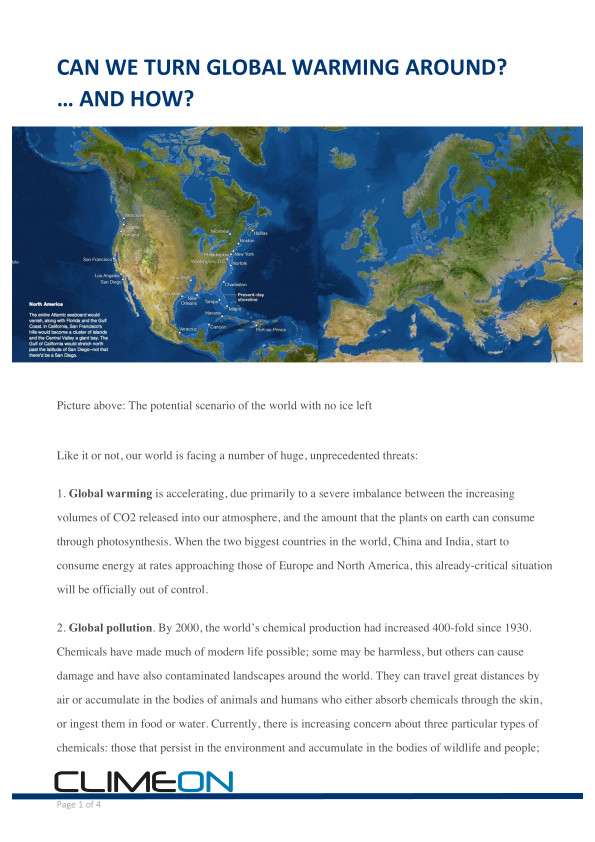 CE picture
SHARE THIS ARTICLE
Manage Cookie Consent
To provide the best experiences, we use technologies like cookies to store and/or access device information. Consenting to these technologies will allow us to process data such as browsing behavior or unique IDs on this site. Not consenting or withdrawing consent, may adversely affect certain features and functions.
Manage options Manage services Manage vendors Read more about these purposes
View preferences
{title} {title} {title}