Breakthrough order for Climeon in Japan

Climeon has received its first order within geothermal heat power in Japan. The Heat Power modules are purchased by Baseload Capital Sweden on the behalf of a newly started Heat Power operator. The order value amounts to just over 2 MEUR, plus service fees and software licenses.

– The energy situation in Japan represents a unique possibility for Climeon and we are incredibly pleased with this first step into the Japanese geothermal heat power market, says Thomas Öström, CEO of Climeon.

– Our technology is a perfect fit, the availability of hot water is great, and the electricity prices are high. This enables us to contribute to increasing the sustainable electricity production with good profitability and at low risk, continues Thomas Öström.

The modules are to be delivered during 2019 and expected to be put into operation the same year. Climeon's role in the project is as a supplier, but the company also owns 20 percent of Baseload Capital Sweden, which was formed to finance investments in geothermal heat power.

– We see great potential for geothermal heat power in Japan and believe that a quick establishment is important in order to succeed. Delivery times are long and in order to win time, we have placed an order while the local Heat Power operator forms a company, says Alexander Helling, Chief Investment Officer at Baseload Capital Sweden.

After the accident at the Fukushima nuclear power plant, Japan's domestic energy production has decreased significantly, which is why more than 90 percent of all primary energy is imported. Most of this is fossil. To accelerate the shift towards local green electricity, the Japanese government has introduced economic incentives and simplified the requirements for permits and surveys.

Japan is located in one of the world's most active volcanic areas and has many hot springs around the country, from which geothermal heat power can be extracted. Today, only just over 2 percent of its known geothermal energy resources are utilized. The price of electricity generated from geothermal heat power in Japan today is just over SEK 3 per kWh, which is eight times higher than the electricity price in Sweden.

This press release contains such information that Climeon AB (publ) is required to publish in accordance with the EU Market Abuse Regulation. The information was published for public disclosure on July 4th 2018 at 08:30 CET through the agency of the contact persons set out above.

About Climeon
Climeon is a Swedish product company within energy technology. The company's unique technology for geothermal heat power – "Heat Power" – provides sustainable electricity around the clock all year round, in abundance and cheaper than the alternatives, and thus outperforms other types of energy. Climeon aims to become a global leader and the world's number one climate solver. The B share is listed on Nasdaq Stockholm First North Premier. Certified Adviser is FNCA Sweden AB. 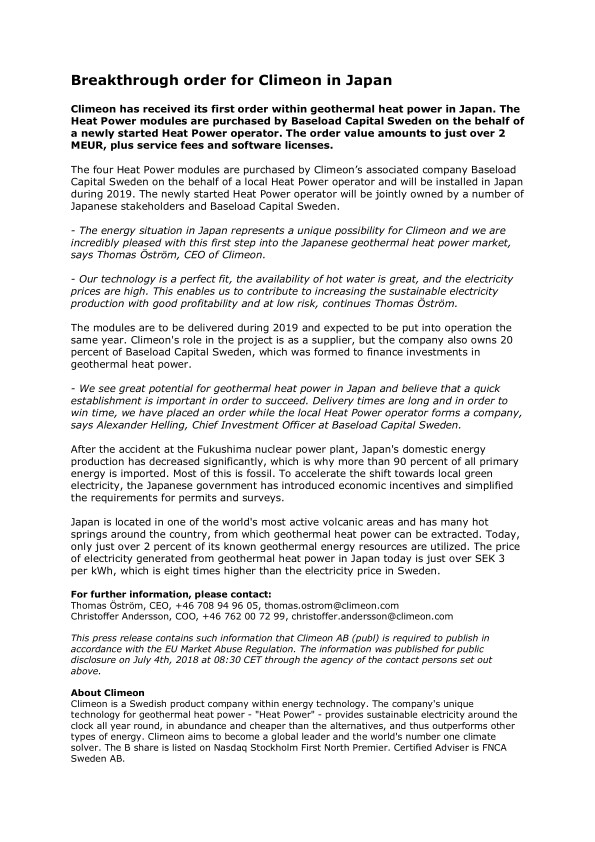 Breakthrough order for Climeon in Japan 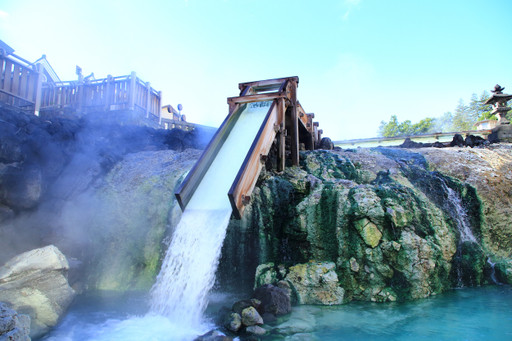 Japan Onsen
SHARE THIS ARTICLE
Manage Cookie Consent
To provide the best experiences, we use technologies like cookies to store and/or access device information. Consenting to these technologies will allow us to process data such as browsing behavior or unique IDs on this site. Not consenting or withdrawing consent, may adversely affect certain features and functions.
Manage options Manage services Manage vendors Read more about these purposes
View preferences
{title} {title} {title}