Breakthrough Energy Ventures, an investor-led venture fund backed by some of the world’s top business executives, has invested in Baseload Capital, the private investment company which Climeon owns part of, to speed up the global deployment of low temperature geothermal heat power.

– Working together with Breakthrough Energy Ventures and Baseload Capital we can now take leaps, rather than steps, toward our vision of becoming the number one climate solver, says Thomas Öström, CEO of Climeon.

Breakthrough Energy Ventures is an investor-led fund created to accelerate the transition to clean energy. The team funds cutting-edge companies with the potential to eliminate a half gigaton of greenhouse gas (GHG) emissions per year and invests across five grand challenges: electricity, transportation, agriculture, manufacturing and buildings. These are the broad areas of activity that contribute most to GHG emissions. The Fund’s investment team has identified low temperature geothermal heat power as one of the most significant opportunities availableto address GHG emissions in the production of electricity.

– Geothermal energy from low temperatures has the potential to transform the energy landscape. We believe that the combination of Baseload’s implementation expertise and Climeon’s Heat Power technology has the ability to unlock the large potential of low temperature geothermal resources and result in the deployment of significant quantities of renewable electricity, says Carmichael Roberts, Breakthrough Energy Ventures.

The first prototype of Climeon’s Heat Power system that turns hot water into clean electricity was developed in 2011. Since then, Climeon has delivered Heat Power systems to customers in several countries and the company is now focused on scale-up and global deployment.

– We’ve put a lot of time and effort into making sure that we are building not just a great product but also an ecosystem that enables maximum impact for our technology. It is great to see such a well-renowned team acknowledging this effort and joining our quest, says Thomas Öström, CEO of Climeon.

– We are thrilled to be joining forces with such an experienced team and of course very proud to have our technology acknowledged by Breakthrough Energy Ventures. Through this collaboration, we will get to work with some of the world’s most knowledgeable professionals within the fields of energy, technology and finance, which is exactly what we need to achieve our vision, says Thomas Öström, CEO of Climeon.

This press release contains such information that Climeon AB (publ) is required to publish in accordance with the EU Market Abuse Regulation. The information was published for public disclosure on March 3rd, 2019 at 15:30 CET through the agency of the contact person set out above.

About Breakthrough Energy Ventures
Breakthrough Energy Ventures (BEV) is a for-profit, investor-led fund created to accelerate the world’s transition to clean energy. BEV has more than $1 billion in committed capital to fund scientific breakthroughs with the potential to deliver affordable, reliable clean energy. The fund prioritizes investments across the five grand challenges that contribute most to greenhouse gas emissions: electricity, transportation, agriculture, manufacturing and buildings. BEV was created by the Breakthrough Energy Coalition in 2016 and is backed by an investor group that includes many of the world’s top business leaders. For more information visit www.b-t.energy/ventures/

About Climeon
Climeon is a Swedish product company within energy technology. The company's unique technology for geothermal heat power – Heat Power – provides sustainable electricity around the clock all year round, in abundance and cheaper than the alternatives, and thus outperforms other types of energy. Climeon aims to become a global leader and the world's number one climate solver. The B share is listed on Nasdaq Stockholm First North Premier. Certified Adviser is FNCA Sweden AB, +46(0)8-528 00 399, info@fnca.se. 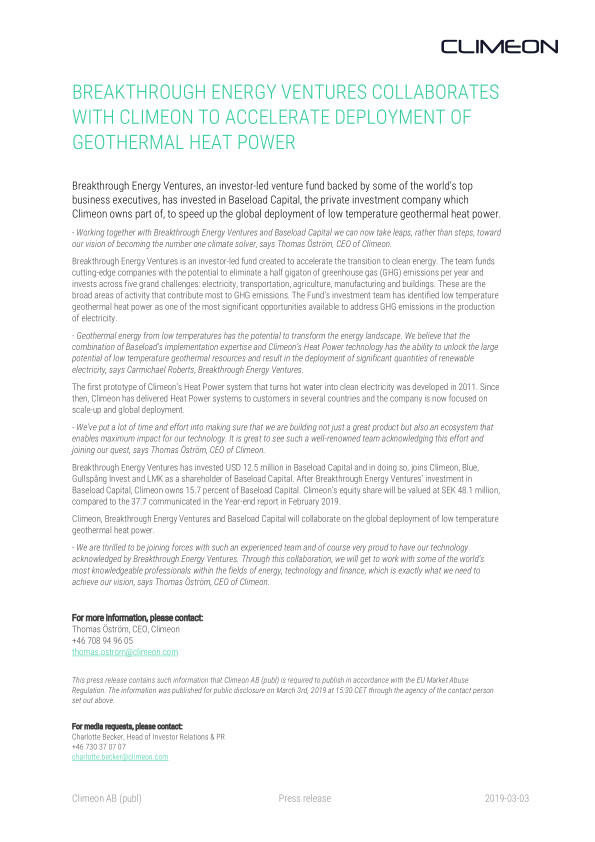 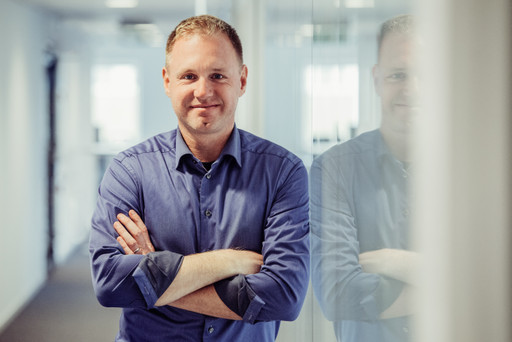 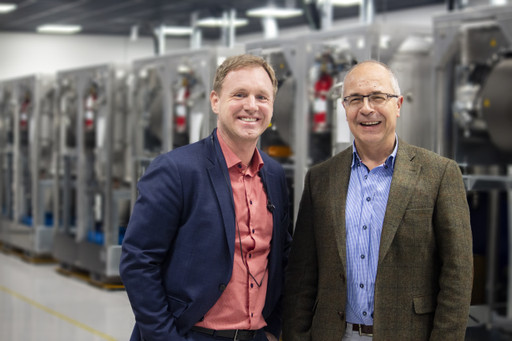 Climeon_Founders_Thomas_Joachim
SHARE THIS ARTICLE
Manage Cookie Consent
To provide the best experiences, we use technologies like cookies to store and/or access device information. Consenting to these technologies will allow us to process data such as browsing behavior or unique IDs on this site. Not consenting or withdrawing consent, may adversely affect certain features and functions.
Manage options Manage services Manage vendors Read more about these purposes
View preferences
{title} {title} {title}