Baseload Capital investigates the opportunity to issue a green bond

Financing company Baseload Capital, which Climeon owns 19.9 percent of, has established a green bond framework and is investigating the opportunity to issue a green bond. The purpose of the capital raise is to accelerate the global deployment of geothermal heat power.

Baseload Capital has today published a green bond framework and is now investigating the opportunity to issue a green bond. Climeon is not one of the signatories. The purpose of the capital raise is to finance more projects within geothermal heat power and accelerate the global deployment of geothermal power plants. Baseload Capital will initially focus on projects in Japan.

In the beginning of 2018 Baseload Capital Sweden was formed by Climeon, Blue, Gullspång Invest and LMK in order to offer short- and long-term financing of sustainable baseload power. Since Baseload Capital’s founding, the intention has been to further increase the financing capacity by issuing securities. 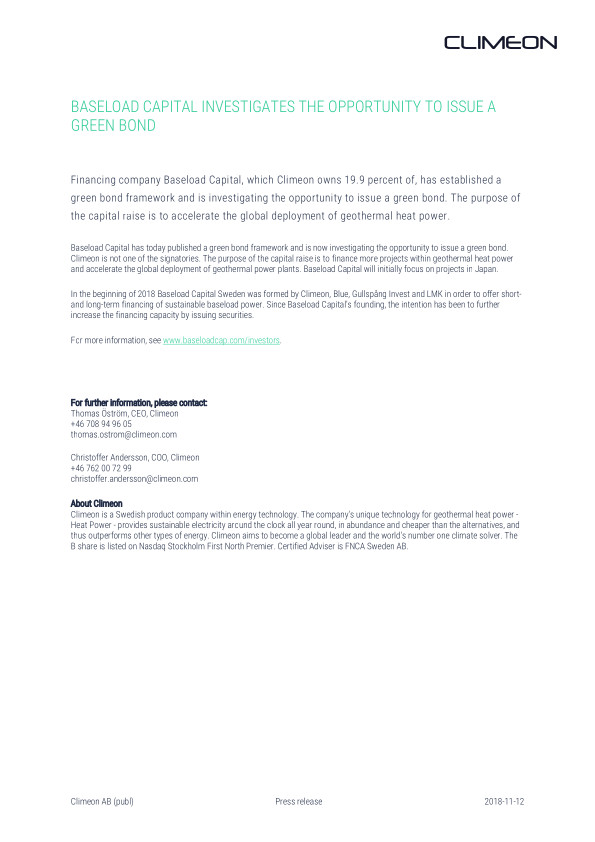 Baseload Capital investigates the opportunity to issue a green bond
SHARE THIS ARTICLE
Manage Cookie Consent
To provide the best experiences, we use technologies like cookies to store and/or access device information. Consenting to these technologies will allow us to process data such as browsing behavior or unique IDs on this site. Not consenting or withdrawing consent, may adversely affect certain features and functions.
Manage options Manage services Manage vendors Read more about these purposes
View preferences
{title} {title} {title}