The shareholders of Climeon AB (publ) held on Tuesday the 19th of May, 2020, the Annual General Meeting in Stockholm. The following is a summary of the most important decisions made at the meeting.

Board of Directors
The AGM decided in accordance with the proposal from the Nomination Committee to re-elect Per Olofsson, Jan Svensson, Thomas Öström, Olle Bergström, Vivianne Holm and Therese Lundstedt and to new-elect Charlotte Strand as Board members. Per Olofsson was re-elected as Chairman of the Board and Jan Svensson as Vice Chairman.

Charlotte Strand, born in 1961 in Denmark, has a Master of Science (Cand. Oecon) from Aarhus University in Denmark. Charlotte Strand has several years of experience as CFO/Finance Manager within the Danish energy group Dong Energy and also as Senior Vice President/CFO of the subsidiary Dong Energy Wind Power. Charlotte Strand has also several years of experience from board work and is presently a board member of PostNord AB, Flügger A/S, Per Aarsleff A/S and of Esvagt A/S. She has experience from being the Chairman of the audit committees in two of these companies.

Authorisation of the Board to decide on share issues
The AGM decided in accordance with the Board’s proposal to authorize the Board, until the next annual general meeting, to decide upon issues of B-shares, convertibles and/or that encompasses a share capital increase of up to SEK 75,000 which corresponds to up to 5,000,000 new B-shares.

Presentation by the CEO
Due to the Covid 19 situation, Climeon’s CEO Thomas Öström did not hold a presentation at the AGM. The CEO presentation regarding the financial year 2019 and the business development during Q1 2020 will be published at the company’s website no later than on the June 1, 2020.

Climeon AB (publ)
Board of Directors

About Climeon AB (publ)
Climeon is a Swedish product company within energy technology. The company’s unique technology for geothermal heat power – Heat Power – makes a large untapped energy resource available and provides sustainable electricity around the clock all year round. Heat Power is a cheap and renewable energy source with the potential of replacing much of the energy that comes from coal, nuclear, oil and gas, today. Climeon aims to become a global leader and the world's number one climate solver. The B share is listed on Nasdaq First North Premier Growth Market. Certified Adviser is FNCA Sweden AB, +46(0)8-528 00 399, info@fnca.se. 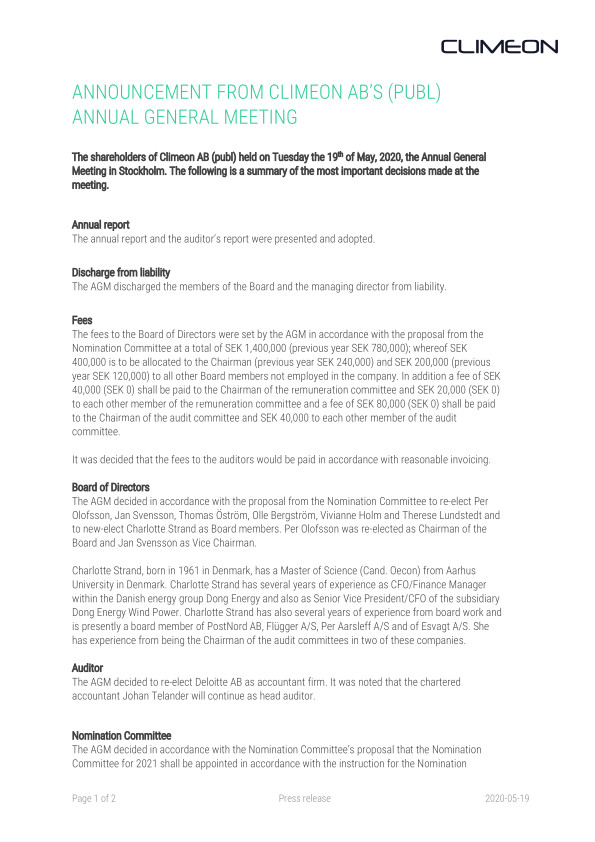 Announcement from Climeon AB’s (publ) Annual General Meeting
SHARE THIS ARTICLE
Manage Cookie Consent
To provide the best experiences, we use technologies like cookies to store and/or access device information. Consenting to these technologies will allow us to process data such as browsing behavior or unique IDs on this site. Not consenting or withdrawing consent, may adversely affect certain features and functions.
Manage options Manage services Manage vendors Read more about these purposes
View preferences
{title} {title} {title}