The shareholders of Climeon AB (publ) held, on Wednesday the 18th of May, 2022 the Annual General Meeting in the premises of Kista Gate. The following is a summary of the most important decisions made at the meeting.

Board of Directors
The AGM decided in accordance with the proposal from the Nomination Committee to re-elect Thom-as Öström and Anders Lindberg and to new-elect Liselotte Duthu Törnblom, Peter Carlberg and Håkan Osvald as Board members. Håkan Osvald was newly elected as Chairman of the Board.

Peter Carlberg has broad and international operational experience from both marine and offshore operations as well as from joint-venture collaborations and business integrations. Amongst other, Peter has served as CEO of Alfa Laval Marine & Diesel Equipment in Sweden and has been the CEO of Alfa Laval's subsidiary in Korea, of Framo AS in Norway and of the South Korean company LHE.co.kr. He has board experience and has been a board member of, among others, Consilium AB and MESAB AB.

Håkan Osvald, who until April 30 this year has had the position as Chief legal officer at Atlas Copco, has both broad and international experience from management and legal functions within the Atlas Copco Group, including responsibility for M&A globally, stock exchange and compliance as well as other legal matters. Håkan has served as Board member in several bodies and companies within the Atlas Copco Group. He is a board member of the Sweden China Trade Council, the Swedish Foreign Trade Association and Djurgården Hockey.

Auditor
The AGM decided to re-elect Deloitte AB as accountant firm. It was noted that the chartered account-ant Daniel Wassberg will be the new head auditor.

Authorisation of the Board to decide on share issues etc
The AGM decided in accordance with the Board’s proposal to authorize the Board, until the next annual general meeting, to decide upon issues of B-shares, convertibles and/or that encompasses a share capital increase within the limits of the Company’s Articles of Association as regards the number of shares and share capital, which is in force at the time of the issue decision. The issues may be done with or without pre-emptive rights for the company’s shareholders

New incentive program for employees
The AGM decided in accordance with the Board of Directors proposal to issue a maximum of 997,500 warrants with the right to subscribe for the same number of B-shares. Each warrant entitles to subscription of one new B share in the company at a price corresponding to 200 percent of the volume weighted average price listed for the company’s shares at First North Premier during the period May 11, 2022 – May 25, 2022. Subscription of B-shares can take place during the period from September 1, 2025 up to an including September 30, 2025. Sub-scribers shall for each warrant subscribed pay a price per warrant equal to the warrant's market value calculated according to the Black & Scholes valuation model.

Presentation by the CEO
In the CEO presentation Climeon’s CEO Lena Sundquist commented the financial year 2021 and the business development during the first quarter 2022. 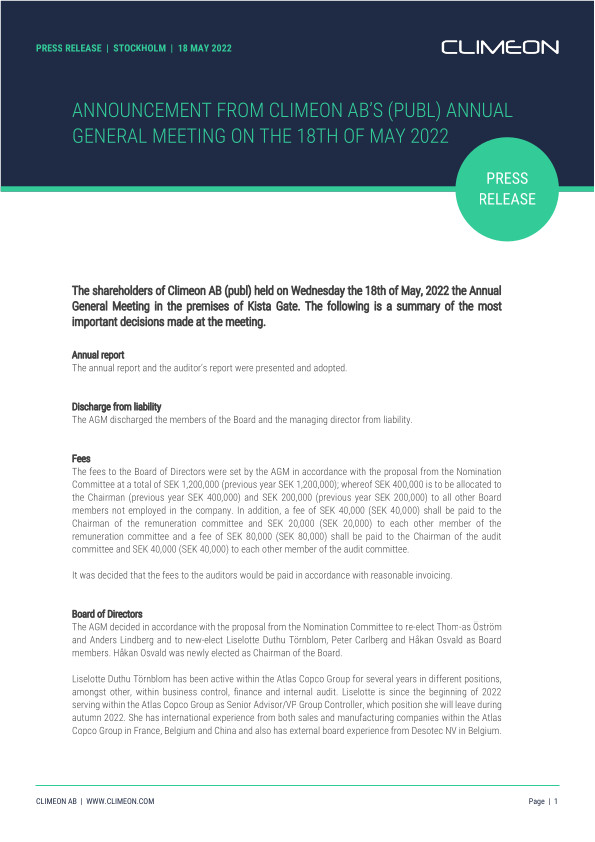 Announcement from Climeon ABs (Publ) Annual General Meeting on the 18th of May 2022
SHARE THIS ARTICLE
Manage Cookie Consent
To provide the best experiences, we use technologies like cookies to store and/or access device information. Consenting to these technologies will allow us to process data such as browsing behavior or unique IDs on this site. Not consenting or withdrawing consent, may adversely affect certain features and functions.
Manage options Manage services Manage vendors Read more about these purposes
View preferences
{title} {title} {title}